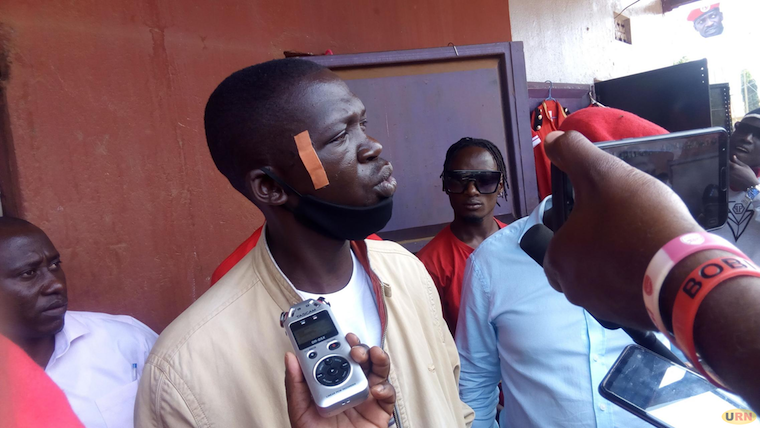 Two men moving with Sipapa in the same vehicle are said to have opened fire when a group of People Power supporters confronted them shortly after parking in front of the premises of Fred Nyanzi, the elder brother of Robert Kyagulanyi alias Bobi Wine, a presidential aspirant and head of the National Unity Platform (NUP).

According to eyewitnesses, People Power youths attacked Sipapa, a self-proclaimed supporter of President Yoweri Museveni and the ruling National Resistance Movement (NRM). Sipapa was driving a Super Custom vehicle registration number, UBE 229E and the youth allegedly broke his windscreen, prompting two men who were driving with him to fire in the air and at the shops.

Gilbert Mugisha who operates a shop on Nyanzi’s building, says he was attending to his customers at around 9 am last Saturday when chaos broke out after the youth accused Sipapa of threatening to shoot them on various previous occasions.

He says the same group returned on the same day at around 9 pm in the evening and parked in the middle of the road and started asking if there anyone who had wanted to say anything about the earlier morning incident.

According to Mugisha, Sipapa mockingly asked the residents; 'banange, ka-sukali ke'ko oba twongelemu' (was the earlier sugar enough or we add some more). The phrase has often been used by Kyagulanyi to imply that his sustained political pressure has forced President Yoweri Museveni and his NRM government into political mistakes.

Elizabeth Namagembe, a salon operator says they locked up themselves inside their premises when the shooting started, adding that one of their colleagues collapsed due to the heavy sound of gunfire. Namagembe also notes that no police officer stepped foot in the area until the next day despite the fact that Kira Road police station is just a short distance away.

After shooting at #BobiWine supporters, city socialite Charles Olim alias Sipapa allegedly mockingly asked; ka sukali ke'ko oba twongelemu (guys, is the sugar enough or we add some)? The phrase has often been used by Bobi to imply pressurizing the state into political mistakes pic.twitter.com/AukD3uVKtt

Muzafaru Nyombi, who is nursing a broken leg and wounded eye, says the same group returned on Saturday night and pounced on him as he was planning to return home. They reportedly accused him of being one of the people who attacked them during the day.

According to Nyombi, he opened a case against Sipapa and wants him arrested to answer for assault. Fred Nyanzi says despite opening a case at Kira Road police station they continue to see Sipapa moving around freely. According to Nyanzi, this is the third time that Sipapa is making a similar attack.

“We’re going mobilize ourselves all these people who were affected that day to pinch a demonstration at Kira Road police we demand police to arrest Sipapa and charge him,” Nyanzi said.

Sipapa has not yet commented as he could neither pick nor return our calls. The Kampala Metropolitan Police spokesperson, Patrick Onyango, says the matter is being investigated. He says police detectives recovered bullet cartridges that will help to establish the owner of the firearms used.

+1 #1 WADADA rogers 2020-09-07 12:48
Okay, there is no single day that i will ever agree with that idiot called Siapapa, i have only seen him once at the wedding meeting of Fred Nyanzi at Lugogo, i didnt think he is what the press whats us to believe.

I know the incident may have taken place but i think it is being brown out of proportion, just look at that guy with a plaster on his face, clearly, it is covering no wounds.but guess some body wants to settle scores.
Report to administrator
+1 #2 Jonathan 2020-09-07 21:16
When the government gives out guns to rascals and deranged people , shooting and injuring innocent people who doesn't know about the government is what happens.

The remidies for this desease called impunity is simple. Turn out in big numbers in 2021 general election and say no to Impunity.
Report to administrator
+1 #3 Lakwena 2020-09-09 11:20
In other words, this is part of Mr. M7's demystification of the gun: where every Rukutana, Kitatta, Tom, Dick, Harry and Sipapa of this country are carrying AK47 in their Nagoya Junkyard cars.

They do their terror drive-by shooting at the opposition, and with straight faces, the Patrick Onyango of our Ugandan police will tell you, "we are investigating, blah blah" until Jesus returns.

What a forsaken country!
Report to administrator