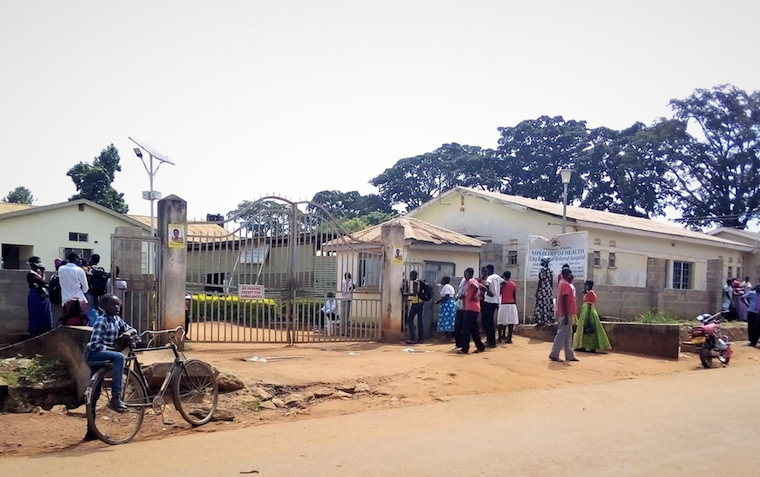 Caregivers outside the hospital main gate

Lira regional referral hospital in Lira city has temporarily closed its gates to the public following the death of a doctor at the facility.
Dr Patrick Odongo, 56, a native of Bala sub-county in Kole district breathed his last in the hospital’s intensive care unit on Saturday night.

Although he was a known diabetic patient, there is speculation that his condition worsened when he contracted Covid-19 leading to his death. Two other health workers at Lira hospital tested positive for Covid-19 on September 5.

This brings to six, the number of health workers who have tested positive for the virus at the facility. As a result, management has closed the facility to the public. Currently, only patients with discharge forms are being let out of the hospital.

One of the guards at the hospital main gate told URN that people are not being allowed into the facility. He explained that they are waiting for resolutions from an ongoing meeting involving all the hospital’s departmental heads.

“For now it is temporary closure because we still do not know what will come out of that meeting. For now, the best I can do for the patient attendants is to register names of their patients and delivery whatever they had brought for them,” he said.

“And if they want to talk to someone inside, I call their names using this megaphone, and they come and talk from a safe distance from each other,” he added.

However, Judith Namirimu Polah Nanyonjo, the senior principal nursing officer heading the Covid-19 task force of medical workers in Lango, says the hospital isn’t closed. She confirmed that there are medical workers who got infected although she could not confirm the number.
“The information that the hospital is closed is not true but there are medical practitioners who have tested positive and the fact that they tested positive does not mean that the hospital should close.”

Efforts to get any information from Dr Stephen Obbo, Lira hospital director were futile as he said he was looked up in an important meeting.

Covid 19 will shortly make a fool of those who have mishandled the fight against it, putting lives of others in danger..
Report to administrator
0 #2 Wainaichi 2020-09-07 09:47
Deepest condolences to the fallen doctor who died in the in the line of duty.

Medical staff all over the world are first on the frontline helping sick people and many'many of them had died in their of duty.

That is why medical staff will first receive new vaccines to be protected and to be able to treat sick people.

Fallen heros like this deserve government recognition 'decorations and financial support to their families to enable them to get over family tragedy.ĺ
Report to administrator