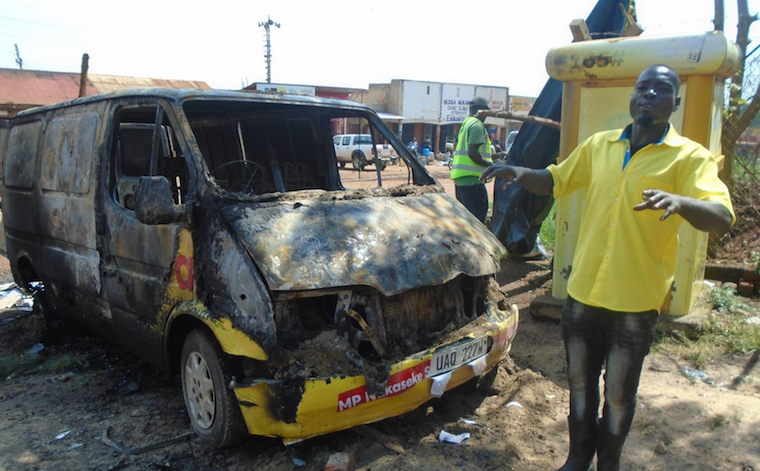 Police have arrested four persons for allegedly burning a car belonging to an aspirant for the Nakaseke South parliamentary seat.

Nasur Lubowa, one of the area residents says that they got a notification from a security guard that the car was on fire. However, it was too late to save it. Nsereko's campaign manager Joshua Zaake says that they have been using the car to transport campaign posters and campaigners to the rallies.

Zaake says that he has previously been intimidated by supporters of Arthur Nkalubo, a challenger within the NRM camp and incumbent MP Luttamaguzi Semakula.

Zaake explains that he has received reports that a group of about 20 people participated in the act in vengeance over Luttamaguzi's detention. Luttamaguzi is currently on remand at Kasangati prison for alleged breach of COVID-19 guidelines, cases which, according to his supporters are politically motivated.

Nkalubo, the other contender in the race condemned the burning of the vehicle and dismissed any report, linking him to the incident. Nkalubo has since asked the police to release his supporters who were suspected of burning the vehicle. He said he doesn't condone any acts of violence and that his supporters are innocent.

Isah Ssemwogerere, the Savannah Regional police spokesperson says that police has so far arrested four suspects and they are being detained at Kiwoko police station to help in the investigations. Ssemwogerere, however, has warned supporters of all camps against participating in any electoral violence.

According to the NRM Electoral Commission roadmap, campaigns have come to an end today and polls are expected on Friday, September 4.

You are for hate', killing 'violence and giving Uganda on a silver plate to thugs from Eurpwan Union who want to get free and slavery labor in Uganda, unemployment" pornogrsphy' abuse of drugs and alcohol and social destruction.

Uganda must not allow that.I would like to see any example where Europe' Norway, Germany' Italy and others help aside from Japab China and other friends.

Why Ametica and Euripe are not investing in Uganda and Africa when last century they proclaimed that Africa is the continent of the future XXI st Century ?? Why did they lie to us?
Report to administrator