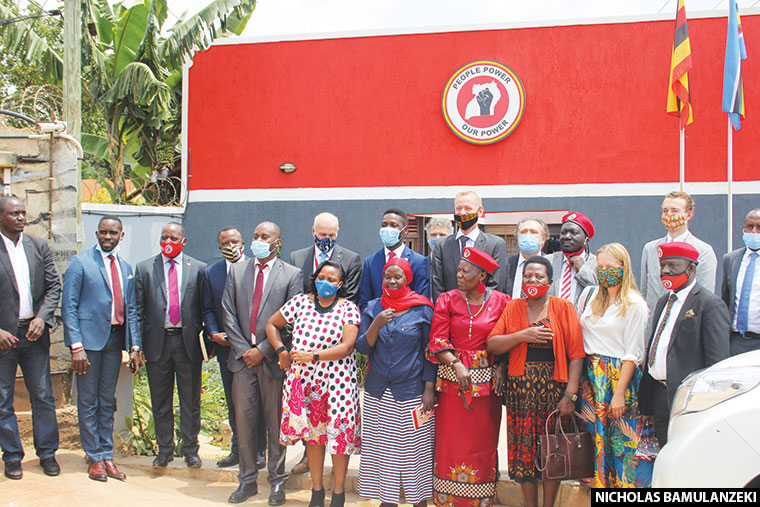 Excited supporters decked in the red party color overalls and berets also mobbed the NUP office as the SUVs trooped into the parking lot.

As the high-profile visitors disembarked, Robert Kyagulanyi, the party presidential candidate and his co-administrators were on hand to welcome them. The timing of the visit was very significant.

To the hosts and their supporters, this was the perfect endorsement for Kyagulanyi’s presidential bid and a political coup for the young musician-turned-politician as the election campaign enters its most intense period.
This was the first visit by the EU Delegation to NUP, a political party – with a new mindset and new young generation of politicians that has unsettled the ruling NRM political establishment.

The timing of the visit stirred even more excitement within the largely opposition forces for change. After the meeting, NUP spokesperson Joel Ssenyonnyi said the visit was in recognition of NUP as a fully registered and serious political actor in Uganda’s political landscape.

He said People Power pressure group had already engaged with the EU Delegation before it morphed into a political party.

Ssenyonnyi said NUP used the meeting to unveil its objectives as a political party seeking power in Uganda. He said EU ambassadors wanted to know more about NUP’s preparedness to participate in the forthcoming general elections.

He said the delegation has committed to engaging the government on the matter to ensure that this time round, the ground is leveled for all contenders. He said the ambassadors told NUP that they will also hold talks with government to ensure peaceful and credible elections.

But similar EU delegation visits to the opposition Forum for Democratic Change head office in Najjanankumbi, The Alliance for National Transformation and the Democratic Party have since dampened the original NUP enthusiasm and excitement.

Within the EU, the visits are nothing new and out of the ordinary. The visits are part of the regular “political engagement with all political parties that are registered and are active participants in the coming general election.”

This was confirmed by Emmanuel Gyezaho, the EU press advisor in an interview with The Observer last weekend.

“This [visit] was part of the EU’s regular political engagement,” he said by telephone.

According to political party insiders with good knowledge of the discussions between political party officials and the delegation, the EU heads of mission had a similar set of questions for our local politicians and parties.

Interviewed for this story, one opposition party official said of the meetings, “They wanted to understand how prepared we are for the elections, how we are conducting our activities and what issues we stand for.”

The delegation was also keen on knowing the critical challenges political parties are grappling with in this election campaign and solutions if there are any. Many opposition politicians are having a difficult time campaigning especially in the wake of the coronavirus pandemic.

Gatherings are banned and on-the-ground village campaigns are also outlawed. What has been allowed is what has come to be known as scientific campaigns or on-air (radio, TV, social media) campaigns.

But law enforcement agencies have blocked many opposition figures from accessing several radio or TV stations yet ruling NRM politicians continue to draw large crowds during their village campaigns.

The EU delegation, according to insiders, used the visits to ask pointed questions about who the opposition politicians really are and what they stand for. Some political players like Kyagulanyi are new and most of the information the delegation knows about them is either hearsay or gleaned from the media.

But the EU delegation insists the visits are not an endorsement of any political party or player. Protocol-wise, the delegation should have met the ruling NRM party and its chairman President Museveni and his co-administrators first.

But according to insiders, issues about the date of the meeting and timing have stood in the way of that meeting. But the NRM meeting is still on the cards. Besides, one insider said the EU delegation and government officials and the president have regular dialogue.

After the meetings, the EU with the full understanding of the preparedness of the political parties for the 2021 general election, their challenges and ambitions, will move to help the political players.

Shortly after the meeting at the Alliance for National Transformation (ANT) headquarters in Kampala on August 26, party leader, Gen Mugisha Muntu twitted “We had a wide-ranging discussion including some of our concerns with the upcoming elections as previously communicated. I thank the ambassadors for their visit.”

The EU has deployed observer missions to Uganda’s local elections for the last four election cycles since 2001.
The EU has written reports with strong recommendations on improving the electoral process “but the recommendations have not been implemented todate,” one insider said.

But deployment of an EU observer mission is a huge doubt for the 2021 general election largely due to the coronavirus pandemic.

They are simply planning ahead for the post Museveni's regime. Once, they think Robert is their future, they will get rid of Museveni. They are always looking and waiting patiently.
Report to administrator
+3 #2 Wainaichi 2020-09-02 11:48
Look at these thugs and crooks from Eurpean Union.!! Yhey are like Energizer battery' the are confusing and stirring trouble in Uganda permanently.Lets see example of Tullow oil

Where is this company from.? Europe.
Whose EU envoy was expelled from Uganda? European union.

Where is Iraqi money and gold? Taken by Coalition forces and US soldiers parading with stolen money and gold
And now Europe' what do you want to do in Uganda and what are your plans? To undermine Uganda and neicolonizw? Nop you will not do it.Buzz off'will you?
Report to administrator
+6 #3 MuwangaTheUgandan 2020-09-03 09:49
Quoting Wainaichi:

Look at these thugs and crooks from Eurpean Union.!! Yhey are like Energizer battery' the are confusing and stirring trouble in Uganda permanently.

Well said @Wanaichi.
We pray and hope all new leaders in Africa will work hard to break this US/EU as well as China colonisation of Africa.

Our new leaders should end the debt "entrapment" programs and stiffling of innovation by young Africans (read about the financing of African startups by foreign companies).

The battle for Africa's independence continues on. And we will win!!