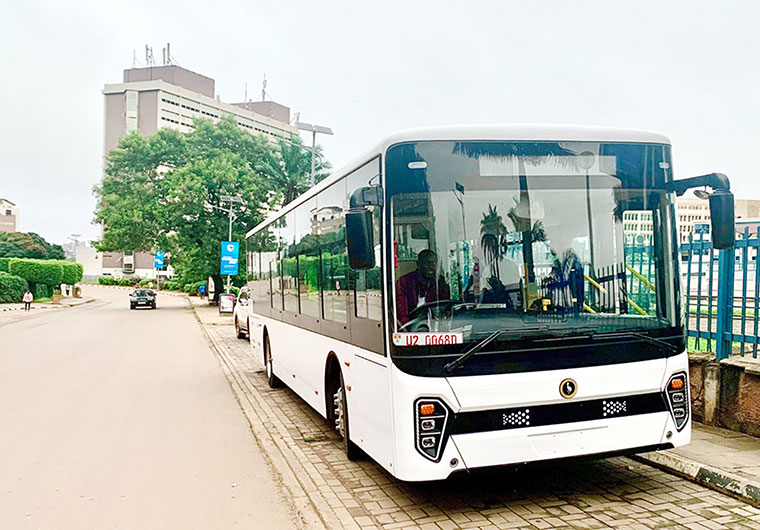 Accompanied on tour of the Kiira Vehicles Plant site in Jinja by Dr Abraham Muwanguzi from the National Planning Authority (NPA), Zwebe gave her nod of approval for the “great strides” Kiira Motors has made in offering homemade green mobility solutions for public transport in cities and urban centers in Uganda, the East African region and the African continent.

She said as GGGI moves to link KMC with possible international partners involved in electric vehicles manufacturing and funding, it is imperative for the government of Uganda to fast-track the development and implementation of a robust Automotive Industry Development Policy.

Already, GGGI is supporting the government of Uganda to pursue green economic growth and to mainstream green growth principles. GGGI received a grant of US$ 5,532,1791 from the European Union to implement a 36-month project aimed at greening Uganda’s urbanization and industrialization as part of the European Union’s Inclusive Green Economy Uptake Programme (GreenUP) financed under the 11th European Development Fund (EDF).

At Kiira Vehicles Plant site, Zwebe was received by a team of senior technocrats from the ministry of Science, Technology and Innovation (MOSTI) led by the director, Technopreneurship, Basil Ajer.

The MOSTI team also conducted an on-the-spot tour of the plant site to update themselves on the progress of the construction works.

Ajer said MOSTI is facilitating local content participation across the automotive value chain by skilling Ugandans and supporting Ugandan innovators especially the youth. He thanked the National Enterprise Corporation (NEC) and the UPDF engineering brigade for the good quality construction works exhibited at the vehicles plant, which will be one of the biggest in Africa.

Musasizi told the visitors that the immediate need for buses in Uganda can be addressed by KMC working with Luweero Industries Limited to produce eight buses per month with a single shift operation before the operationalization of the Kiira Vehicle Plant in Jinja.

Cabinet has since directed KCCA to procure the eco buses from Kiira Motors Corporation as a condition for approving the loan from African Development Bank.

Representatives from the newly created Jinja City, Charles Nampendho, the Senior Physical Planner, and Ernest Nabihamba, said plans are underway to construct and improve the road network to and from the plant. They commended KMC for producing the Kayoola electric buses, noting that sustainable mobility technologies was the way for public transport in cities and urban centers.

Lt Col Wilbroad Muhwezi and Maj Eng Geofrey Kayima, who are overseeing the UPDF construction works at the plant, said the UPDF engineering brigade was building the Kiira Vehicles facility “with the heart of ownership”, since it is a professional people’s army.