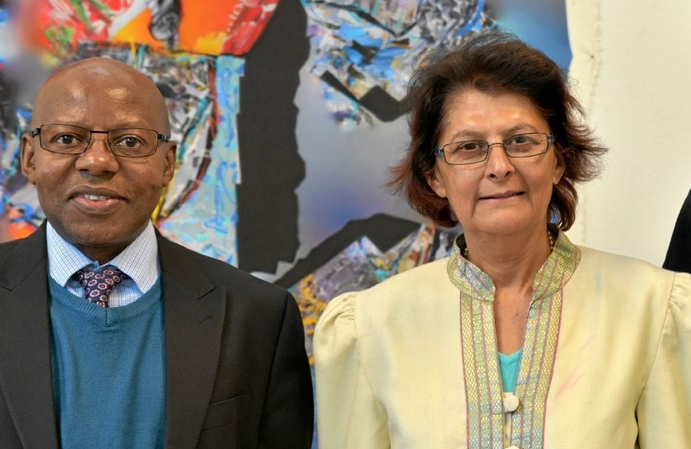 The Head of Mission Copenhagen is Madhvani Nimisha Elly (R), and her deputy Kamahungye Kafeero

The ministry of Foreign Affairs has recalled staff at the Ugandan Embassy in Copenhagen, Denmark implicated in a scam planning to embezzle unspent embassy funds.

In an audio clip that has circulated widely, the embassy staff who were attending a Zoom meeting discussed how to share the unspent funds for the 2019/2020 financial year. In the Zoom meeting, the diplomats agreed on how much each of the three top diplomats and the junior staff would get as per diem despite not doing any work.

The team in the audio also appeared to discuss a plan on how to bribe the auditors citing similar previous incidents at the Uganda Embassy in Switzerland. In the audio, the officials say they will disguise the unspent funds amounting to $4,000 (about Shs 14.6m) as their per diem for 8 days.
The ministry of Foreign Affairs permanent secretary Patrick Mugoya on Monday said that the staff implicated have been recalled pending investigations in the matter. However, Mugoya did not reveal the names of the implicated staff.

“The Ministry in consultation with the permanent secretary/secretary to the treasury and the Auditor General will carry out a thorough investigation into this matter. In the meantime, the officers implicated have been recalled to the headquarters to pave way for investigations” Mugoya said in a press statement.

The Head of Mission Copenhagen is Madhvani Nimisha Elly, Kamahungye Kafeero the deputy head of the mission, Alex Hope Mukubwa, the accounting officer, Gordon Katureebe, the first secretary, and Richard Biribonwoha, the third secretary among others.

According to the Public Finance Management Act, unspent funds are supposed to be returned to the Consolidated Fund. Foreign Affairs says it is disturbed by the allegations and necessary measures were going to be put in place to mitigate such from happening again.

Staff of ?? embassy in Denmark led by Nimisha Madhvani &Elly Kamahungye discuss how to steal taxpayer ? $4000(14,688,000 ugx) each daily from the mission for 8 days! Elly asks them to have him keep the money in a safe for them until the audit is done! 1/3 #Uganda #VoteNUP☂️ pic.twitter.com/4VFcs6TYDZ

This is embarrassing. Isn't Nimisha Madhvani related to the very rich Kakira group? This all seems beneath her.

Naivety..When you grow up in so much wealth,you think you are indulging in such petty theft to keep your 'good name' with your needy colleagues, considering they come from the same background as your appointing authority.

Its quest for cheap popularity. And that they were caught is because COVID 19 did its trick of zoom.

Don't even think for a second they have not done this over and over.The Madhvani will be fine;the others are cooked...potentially.
Report to administrator
+1 #12 Mbeho Achuc 2020-08-26 15:29
It's only an african fool who can steal on such unprecedented scale, and expect to be not despised even racially kept as far away as possible!!!

The thieves have made a terrible reputation that is an international spectacle!!!

Bantumwe, is there any name to protect if the thieves above are assigned to another country?
Report to administrator
+1 #13 Amooti Mugi 2020-08-27 10:27
European Union countries, The United Kingdom,The USA must help Africa to stop such unprecedented theft of public funds ,foreign aid funds, even loans,when African population is in poverty by carefully scrutinizing the theft(read corruption ) history of any African officials, or leaders before allowing these to travel to those developed Countries!!!

Even children of African thieves must not be allowed travel to those countries!!! Then African theft may stop...
This is viable...!
Report to administrator
0 #14 Okello Q 2020-08-27 15:30
Kamahungye sounds very experienced in manipulating auditors after stealing tax payer money.

Shame on those auditors who receive handouts & look the other way when public money that would have constructed hospitals, roads, schools etc is stolen.
Report to administrator
12