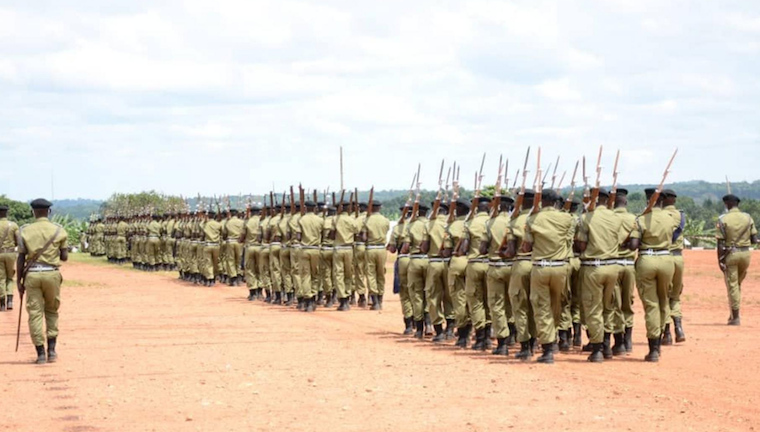 Some of the police trainees

Police, in August last year, recruited 5,100 probation police constables and assistant inspectors of police. Slightly more than 4,800 trainees have completed the one-year course. A police source said some of the recruits developed health complications and they were discontinued.

In December last year, police spokesperson Fred Enanga confirmed that three of the recruits had died. They include two female trainees who lost their lives after 52 days in training, due to over bleeding. It is said that the two ladies had miscarriages.

A source at Naguru police headquarters said a special probe had been set up to understand how pregnant women were admitted for the training because it is against the recruitment procedures in all armed forces. However, findings of the probe have remained scanty. The source said that one female trainee dropped dead in the fourth week, while another female and male trainee died in November and December respectively.

Enanga said he was still waiting for a report from the Police Training School commandant, assistant commissioner of police Abubaker Ziwedde. Nevertheless, Enanga said it is not unusual for trainees to die during this kind of training.

The police recruits started their training in July 2019, after an exercise which was marred by scandals. At least 130 of the recruits were rejected moments after arriving at the school on grounds that they had fake academic papers and health documents.

With almost half of the trainees being over-age, the police’s policy advisory committee chaired by Ochola resolved to tactically re-advertise 2,000 vacancies purposely to accommodate the 2,000 recruits who were on the verge of being turned down. The age qualification was amended from 22 to 25 years for probation police constables and 25 to 28 for learner assistant inspectors of police.

Neera'neera'neera to YKM.One more term of office and further development of Uganda.Thank you boys and girls newcrecruirs
!!!!!!
Report to administrator
0 #3 Lakwena 2020-08-24 08:24
I am sure they have been trained to brutalize Ugandans during the coming General erection.

But after the NRM leadership being in power for 35 years and counting; I don't see no new Barracks being constructed, where will all these additional 4,800 officers be accommodated?

In other words, this is the most backward and dehumanizing regime Uganda will ever have. E.g. I do not know of any country in the world; where the government rents ramshackle and dehumanizing premises for police stations and/or police posts.
Report to administrator