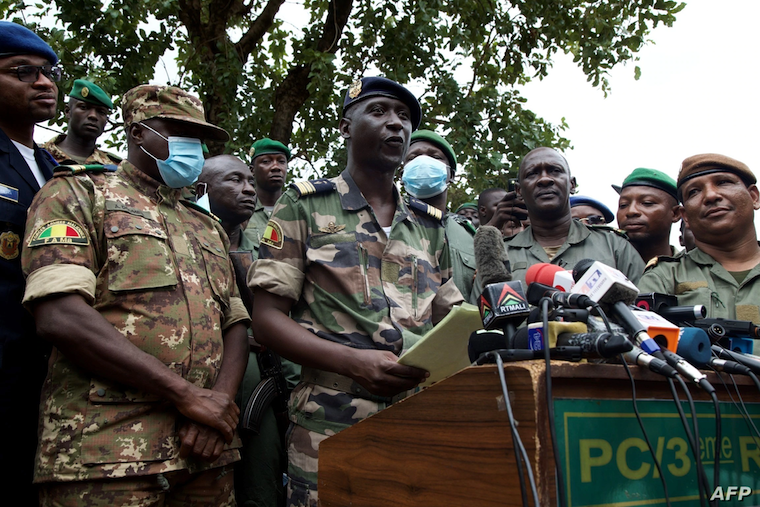 Soldiers who toppled Mali’s president in a coup Tuesday are pledging to hold new elections within what they say is a “reasonable” time.

The coup leaders call themselves the National Committee for the Salvation of the People. They went on national television Wednesday, saying they took over the government to avoid further anarchy and insecurity. Colonel Ismael Wague said the soldiers are eager for stability, not power.

President Ibrahim Boubacar Keita resigned late Tuesday, hours after he was arrested following months of political turmoil in the West African nation. Wearing a surgical mask because of the coronavirus outbreak, a weary-looking Keita appeared on state television to announce he was stepping down to avoid any bloodshed.

The 75-year-old deposed leader said if “certain elements” of the military wanted to end his presidency, with “their intervention, do I really have a choice?” Keita also announced that his government and the National Assembly would be dissolved.

Much of the international community immediately condemned the military coup. The Economic Community of West African States, or ECOWAS, sealed its member states’ borders with Mali and suspended all financial transactions between Mali and its 14 other members. For now, ECOWAS  is removing Mali from its decision-making bodies.

ECOWAS officials have called for sanctions on those it calls “putschists and their partners and collaborators.”

In a closed-door meeting in New York, the UN Security Council expressed its “deep concern” and urged the soldiers to free all those under arrest. The council also underlined “the urgent need to restore rule of law and to move towards the return to constitutional order.”

US secretary of state Mike Pompeo called for “peaceful dialogue” to resolve the Malian crisis and said the freedom and safety of detained government officials and their families must be ensured.

J. Peter Pham, the US envoy to the Sahel region, issued a statement saying Washington is opposed to any “extra-constitutional change.”

Keita’s resignation capped a day of turmoil that began when soldiers seized weapons from an army base in the town of Kati and advanced on the capital of Bamako. A reporter in Mali told VOA’s English to Africa service that the soldiers “went on the rampage, got to the arsenals, got the guns, started shooting in the air, went out and cut off access to the camp.”

Scores of anti-government protesters gathered in Bamako’s central square to cheer on the soldiers as they made their way to Keita’s house to arrest him.

The soldiers arrested Keita and Prime Minister Boubou Cisse at Keita’s house and drove them back to Kati, the same camp where the 2012 coup that overthrew President Amadou Toumani Toure began. The overthrow of Toure allowed Islamist militants to temporarily seize the northern half of Mali until a French-led military intervention drove them from power.

There have been no reports of casualties in Tuesday’s coup. Mali’s June 5 opposition movement has led months of anti-government protests in Mali over an economic crisis, corruption and Keita’s failure to quell the eight-year-old Islamic insurgency. Anger is also brewing over the disputed results of 31 legislative races held in April.

This will depend on the people who have to stay UNITED & demand quick action.

Not even UN/France...managed to end the war to give chance to peace up to now.

Uganda is 1 zone that can throw Museveni out in UNITY, have a beginning without war & not be afraid of warring bush demons coming in to distabilise them!

But all Ugandans do is help Museveni rule for life, then 'what', when he'll be no more while the divisive tribalistic system stands & all look up to him, without plans for a Uganda without him?

Ah! fake opposition leaders are the last to know non will ever replace Museveni through elections he organizes, controls, in the country that belongs to him!
Report to administrator
0 #2 Akot 2020-08-20 19:07
Malians should copy Belarusians, whose UNITY for common purpose has brought EU to call immediate meeting to discuss how to help, while sanctions are already being put against the man who wants to rule beyond 26 years!

Once a people UNITE for common cause against bad rule, developed world is there to help!

The gone Malian government did nothing to help stop the dirty war, while officials lives so comfortably, unconcerned about villages destroyed, people killed!
Report to administrator
0 #3 Lakwena 2020-08-21 08:45
In other words, never say never to coups in Africa! It does not even matter, whether the world and other African countries (bananas) condemn coups in Africa

It will now and then happenanyway: with or without sanctions, in Africa life goes on.

E.g. what happened to Zimbabwe when the military ejected Mugabe? Nothing, life goes on after all the condemnations.

What happen to Sudan, when Bashir was ejected through the aid of the military? Nothing is happening after all the condemnations.

What will happen if tomorrow the UPDF got sick and tired of Mr. M7, for using them as personal mercenaries to stranglehold onto power? Nothing, life will go on even the world undresses in protest/condemnation.
Report to administrator