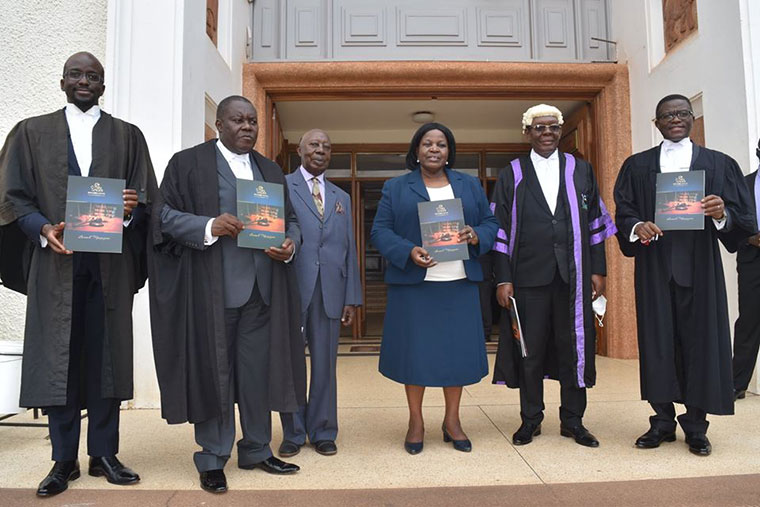 One of the most pertinent issues in Uganda revolves around land, especially in Buganda region where many peasants are still struggling to register their land or kibanja due to lack of access to legal representation. As a result, illegal evictions and land-grabbing have become routine, something that has worried the kingdom leadership for years.

On August 14, the cream of Buganda legal brains converged at Bulange gardens in Mengo to officially launch the Buganda Royal Law Chambers (BRLC), the new legal department for the kingdom.

Supreme court justice Esther Kitimbo Kisakye, who was the chief guest, described the move as a move long overdue; Charles Peter Mayiga, the katikkiro, praised it as a breakthrough while Christopher Bwanika, the kingdom attorney general, noted that BRLC is the turning point in the fight against land grabbers because it will offer access to justice for indigent Ugandans.

“One of the biggest challenges for Ugandans is to get legal representation because it is expensive. Even as a kingdom, we have been relying on the good relations with some top law firms to represent us, sometimes at no fees,” Bwanika said.

“The situation is much harder for individuals who have no financial capacity to get the best legal representation, especially when faced with an adversary who is intent on evicting them from land. So, BRLC comes in as a department to help those people in Buganda at a minimal fee and, where necessary, in the interest of public litigation, BRLC will do so on a pro bono arrangement. It is going to be a legal aid project. The fight to ensure that our people enjoy their fundamental human rights is a noble fight which we shall carry on with integrity.”

Bwanika also noted that with this new standing legal team, it shall also assist the kingdom to manage legal risks.

Since the restoration of Buganda kingdom in 1993, it has been striving to rebuild the pillars that constitute its heritage. According to Mayiga, the establishment of BRLC will make  it not only convenient for the kingdom to oblige with the law, but will also provide it with the requisite strategic direction as it endeavors to position itself in the general scheme of things in the country.

“For instance, we aspire for a federal system of government but such an aspiration is only attainable in full compliance with the rule of law and the Constitution. Therefore, BRLC will be pivotal in this regard,” he said.

“Presently, Uganda experiences episodes that challenge the rule of law like rampant land grabbing and unlawful occupation of land, the sporadic violations of human rights and economic deprivations that affect a big number of our people. The solution lies in an emphatic observance of the law and adherence to the constitutional provisions, however weak or inadequate the institutions that enforce them may be.”

Mayiga also decried what he described as some laws and court orders being morally repugnant.

“St Peter’s church Ndeeba was demolished following due process but the action of demolishing the church touches upon people’s spiritual inclinations and beliefs and I believe these ought to have been taken into account by the court,” he said.

In the same vein, he pointed out that there is a profound symbol of Buganda heritage at the same site in the form of Oluzzi Kalinda next to the church. “It is a royal spring that supplies water to the Kabaka during the coveted ritual of coronation of the Kabaka at Naggalabi, Buddo. Therefore, my first instruction to BRLC is to pursue all lawful means to secure, preserve and protect Oluzzi Kalinda,” he said.

On her part, Justice Kisakye commended Buganda kingdom and all those who conceived this idea. “I have no doubt that this initiative will bear high dividends for the kingdom,” she said. Kisakye, who will mark 11 years at the Supreme court in October, reinforced this notion, basing on a recent experience she had at the Supreme court, where she couldn’t hear a matter in which a kibanja holder, unbeknown of the court process, appealed to her for relief from eviction.

“I told him that he is in a wrong forum; however, I advised him to seek legal services from various organizations. So, I’m very proud to be here when the kingdom is launching a legal department whose mission is to provide legal aid to indigent Ugandans,” she noted.

“So, for the many senior counsels and members of the legal fraternity present, the kingdom has launched this initiative but it will not be able to carry out this function effectively if you don’t come to its assistance, especially in this area where some of the people who greatly need legal services cannot afford to pay for them. The country is crying out for justice.”

Also drawing from her experience as a lawyer at the Uganda Association of Women Lawyers (Fida-Uganda) before she joined the bench, Kisakye said the creation of BRLC was long overdue.

“A lot of progress has been made since the kingdom resumed its activities 27 years ago. However, BRLC has been established at a time when the kingdom continues to face many challenges of a legal nature like the quest for a federal system of government in Uganda, the place of the Buganda kingdom within the current constitutional order, recovery of property confiscated by government as well as the issues of securing and enforcing competing rights in land within the overall legal regime governing land ownership and holding in Buganda. Then there is documentation and enforcement of unwritten Buganda customary law,” she said.

“We all know that the kingdom has over centuries produced positive values and customs which were saved by the 1995 Constitution but when these laws are unwritten, everyone interprets them as they choose. That’s why I believe it is time for us to move forward and I see the BRLC having a role here.

“So, given the challenges I have highlighted above, it is my conviction that BRLC will go a long way to assist the kingdom to render this service that is required but in short supply.”

Kisakye reiterated that she has no doubt BRLC will bring affordable, quality and efficient legal services to the kingdom but it would also go a long way to safeguard the interests of the kingdom of Buganda and its people.

“Addressing current and future challenges requires a team of professional and dedicated advocates who are willing to serve above self and who are committed to serving the kingdom with integrity,” she said.

Kisakye also delved into the controversy of the demolished church. “For those who have had the opportunity of reading the judgment, you can see that the lawyers could have done better. We can only judge the cases as good as they come. If you do not make [good] arguments before court, I may be the proud daughter of Buganda but I would follow the law. So, help develop our jurisprudence by presenting good arguments.”

She summed up the presentation by warning that as BRLC strives to be a centre of excellence, it should recruit the very best in legal practice. “I trust there are good brains that can build the institution that will make us all proud as well as safeguard and protect the BRLC brand. We look forward to seeing BRLC becoming a legal think-tank for the kingdom and its institutions.”

In practice, BRLC is now the official representative of all Buganda entities such as Buganda Land Board (BLB), Kabaka Foundation and Buganda Cultural and Development Foundation, among others.

According to Dennis Bugaya, the BLB spokesman, a similar institution that resembles BRLC was created under the 1900 Buganda agreement until the kingdom was abolished in 1966. “It used to fall under the office of Omulamuzi [judge]. Presently, Omulamuzi is the equivalent of Ssabawolereza (Attorney General); so, BRLC is equivalent to the Attorney General’s chambers,” he said. “This is now the reestablishment of the office.”