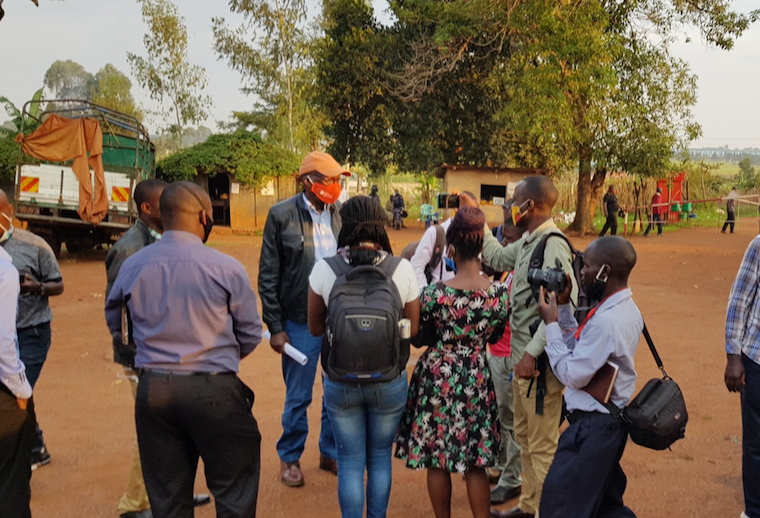 Gen Henry Tumukunde before being arrested

Tumukunde was arrested from Royal Paradise hotel where he was meeting about 10 of his campaign coordinators by police officers led by Hilary Mukiza, the officer in charge of Njeru police station.

He was bundled unto a police patrol registration number, UP5503 and taken to Njeru police station for questioning. He was later released.

Sheikh Abubaker Kayiwa, one of the coordinators, says they were puzzled about why the general was picked up since no other person was arrested from the meeting. Police later said he had been arrested for flouting coronavirus prevention standard operating procedures (SOPs).

“We have tried asking them why they are arresting him and upon whose command, all that they are saying is that orders are coming from above. They are still holding him but we are not going to leave police before he is released,” Kayiwa has said.

The Ssezibwa region police commander, Hellen Butoto confirmed Tumukunde’s arrest but declined to divulge details. The arrest of Tumukunde comes a few days after he officially announced his plans to hold nationwide consultation on his presidential ambitions after picking his nomination forms.

0 #1 Wainaichi 2020-08-19 05:14
What is individual who ripped off Uganda and Ugandans want? To be the president '? Hahahahajahogogovohhigiuv muyaye.and thief!

Reject mafia Tumukunde so that he never cheats and tricks anyone in Uganda.Down Tumukunde and his mafia....⁹
Report to administrator