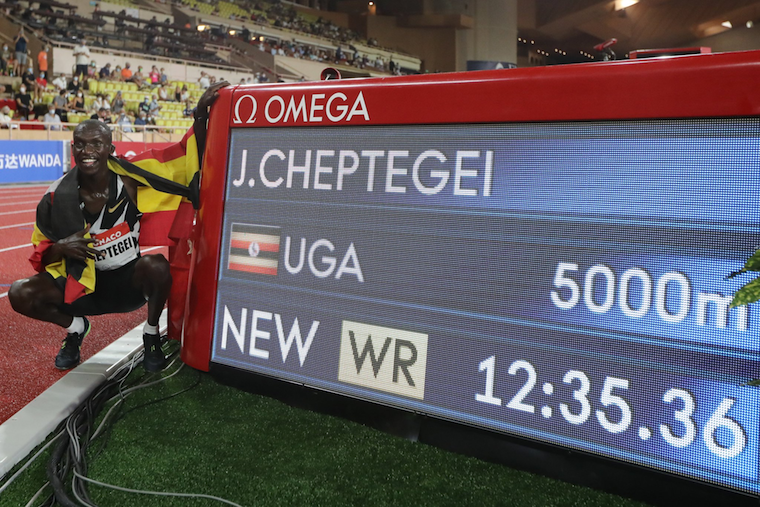 Uganda’s Joshua Kiprui Cheptegei proved his prowess once again by breaking the 5000m world record at the 2020 Diamond League in Monaco on Friday night.

Uganda’s second runner in the race Stephen Kissa started well and set the pace, but bowed out and did not finish the race. Nicholas Kimeli Kipkorir from Kenya who ran neck to neck with Cheptegei in some of the laps finished second in a time of 12:51.78, while another Kenyan Jacob Krop was third.

On his Twitter handle, President Yoweri Kaguta Museveni congratulated Cheptegei. "Congratulations to Cheptegei who has set a new 5000m world record at the Monaco Diamond League. You have brought honour, pride and joy to your country. Well done," said Museveni.

Halimah Nakaayi and Winnie Nanyondo failed to find their good form as they finished 5th and 8th respectively in the 1000m women's race. Nakaayi recorded a national record and personal best time of 2:32.12.

The four athletes were financially supported by the president before they were last Saturday flagged off by First Lady and Minister of Education and Sports Janet Kataaha Museveni.

Government cleared the team to travel on a chartered Uganda Airlines flight to Nairobi before they connected to France together with the Kenyan athletes on another special flight.

The only refreshing news I have read the entire week. Congratulations Cheptegei. You make your country proud.

Congratulations indeed to men who are attempting to build a good international name for Uganda!!!
Report to administrator
+1 #3 Akot 2020-08-15 20:32
Quoting Sabiti:

The only refreshing news I have read the entire week. Congratulations Cheptegei.

Uganda is not a country any more! We must stop acting as if Museveni is alfa & omega & Uganda began & will end with him!

34 years & Ugandans behave as if Museveni is at the beginning of first 5 year term!

Are Ugandans robots created by Museveni with no feelings but to ensure he rules for life?

Demons like Museveni live +90 years & never leave the top post, unless thrown out by a people in UNITY!

Any way, congratulations Cheptegei & I must say you are crazy, with the suffocating heat in France, you made it!
Report to administrator