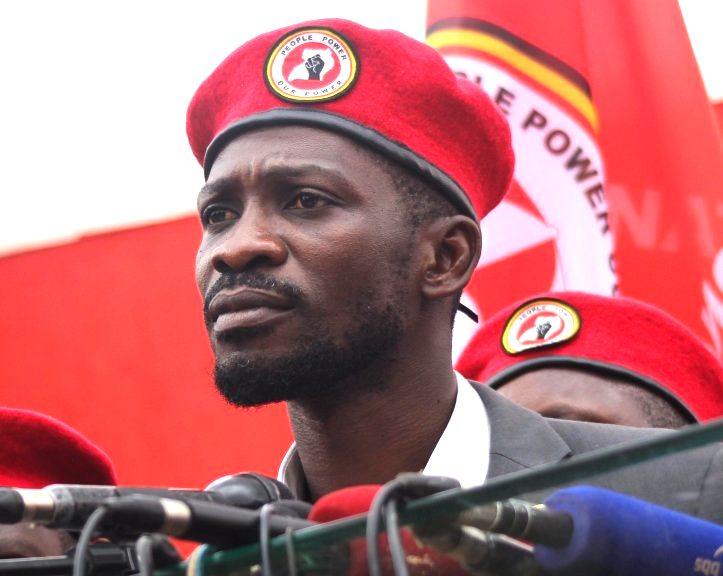 Robert Kyagulanyi Ssentamu, the president of of the National Union Platform (NUP) party has today announced the appointment of four deputy presidents for the party. The four were appointed on a regional basis representing the central, northern, eastern and the western part of Uganda.

The four join Flavia Kalule Nabagabe, the Women League chairperson, Joel Ssenyonyi the spokesperson, David Lewis Rubongoya, the secretary-general, Aisha Kabanda his deputy and Fred Nyanzi Ssentamu, the secretary for mobilization in the leadership of NUP, a party rebuilt from the former National Unity Reconciliation and Development Party.

Speaking at the unveiling of the new leaders at NUP secretariat in Kamwokya, Kyagulanyi said this is the time for those who have not been taking them seriously to start doing so. He called upon leaders in other parties to agree to work together in order to deliver Uganda from what he called the dictatorship of President Yoweri Museveni.

"I'm very honoured to unveil you today, you give me confidence, it gives me pride and extreme confidence to know that I have deputies that are even much more experienced than I am. The nation can no longer doubt us, I say it again, the nation can no longer doubt us. Now they know that we’re serious but most importantly, Ugandans know that by trusting the NUP with their vote, they will be in safe hands…And I must say this, this not the usual kind of leadership, you have that power as entrusted in you by our constitution, please exercise it, don’t be afraid not even of me, guide me where necessary." Kyagulanyi said.

Speaking at the same function, Mpuuga the deputy president in charge of the central region said that streamlining NUP means that they are now prepared to take on Museveni.  He said he is going to do everything under the sun to make sure that Museveni is defeated in the 2021 election.

EU delegation visit
Meanwhile, the NUP leadership has expressed confidence that the international community is beginning to believe in the group bidding to take power in the forthcoming 2021 general elections.

Yesterday, a delegation of ambassadors from the European Union led by the head of the EU delegation to Uganda ambassador Attilio Pacific paid a courtesy call to the NUP/People Power secretariat at Kamwokya. They engaged the NUP leadership in a closed-door meeting for over four hours.

After the meeting, NUP spokesperson Joel Ssenyonnyi declined to divulge details about the engagement but said that the visit was in recognition of the NUP as a fully registered and serious political actor in Uganda’s political landscape. He added that the People Power pressure group had already started engagements with the EU delegation, before its transformation into a political party,

Ssenyonyi said the meeting was also used to unveil the objectives of NUP, as a political party seeking political power in Uganda to the EU as a strong pillar in supporting and funding of Uganda’s policies and economy.

He added that the EU ambassadors wanted to know more about NUP’s preparedness to participate in the forthcoming general elections. He said the delegation has committed to engaging the government on the matter, to ensure that this time around, the ground is levelled for all contenders. Ssenyonyi said, like all opposition in the country, the ambassadors are equally concerned about the quality of the elections which have severally been pronounced as fraudulent by the courts.

Ssenyonyi further downplayed reports that People Power activities are funded by the EU, adding that all their political activities, as of now, are funded by Ugandan well-wishers.

Karemire Ssebo
you almost always write sensible things . Not this time
Phalanch used two simple words. i.e . "frontline " & "struggle" ..... How does that amount to counting chickens ? Maybe you are trying to use expressions without understanding what they mean ?
.

I understand your frustration. Some realities can be very irksome, can't yhey? Sometimes a nail must be driven in & in time before further damages are done.

NUP is OK but its rough edges need to be trimmed in time. I thank you for your understanding and please be mindful about the M7 types of mentality that says " ... because I almost lost my life, therefore I am entitled to ..." .
Report to administrator
0 #12 Wooden K. 2020-08-14 15:09
Karemire , I see that you are back to your polite chair.
I appreciate that .

Still , I must wonder what frustration you are talking about . I happen to know that one of the symptoms of frustration is fear of shadows ,nailing imagined realities and ignoring relevant evidence.

Do you see me doing that ?

Again , you miss another point.

At no time or occasion , has Bobi Wine claimed that he is entitled to anything because of his experiencies in Arua or anywhere.

Iis ME who felt it right to mention that the "O`s) ( read northeners) should have proof that Bobi Wine and People Power is broader in scope and acition , even if it was judged based on the lineup of its current 10 leaders

[quote name="Phalanch"]It's our prime pleasure as well as privilege to have these freedom fighters on frontline in our struggle , Long live The NUP party , Long live Mr President .

Which president are you referring to?
/quote]

[quote name="Phalanch"]It's our prime pleasure as well as privilege to have these freedom fighters on frontline in our struggle , Long live The NUP party , Long live Mr President .

Which president are you referring to?
/quote]

Weberemu, meaning it's illegal to think yet, , I talk about NUP en U ask Which President!!!!

Sorry, I got mixed up there, in two ways. (i) I was referring to a comment from Wooden K, which you too quoted.

Karemire , I see that you are back to your polite chair.
I appreciate that .....Nice day !

Thank you for that insight on the shaping future of Uganda. As for the O's, your interpretation of who they are is as good as mine, athough some non-northerners [e.g. Oyos in Bunyoros] are also O's Anyway, the important thing is that they are Ugandans too and that future of Uganda includes them too.

Note for current NUP leaders:Be inclusive from the onset because that mistake cannot be corrected later.

Please be mindful that Uganda has never existed without them (the O's) IN and will never exist with them OUT, unless if that is what NUP stands for. Have a Nice Day Too.
Report to administrator
0 #16 Wooden K. 2020-08-14 21:18
And here we are today .
A badly beaten Bobi Wine who took diplomats inside that former notorious jail in Makidye barracks , is the same one who has taken the diplomats into the gheto

Ssebo Karemire , I see you making the same old mistake , asking questions , diving into uncalled for emotions and confusing maths with arithmetic.

I think you should take a NUP ( read nap)
Obe gye !
Report to administrator
12