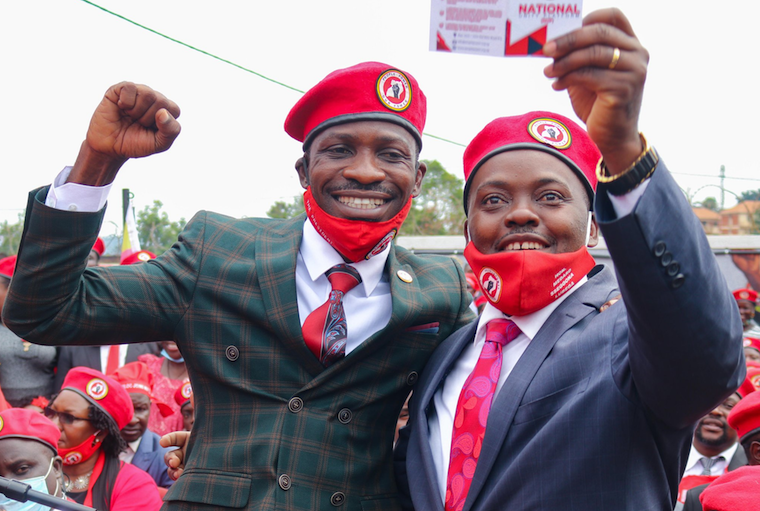 Their crossing brings to 17, the number of MPs that the party has so far fished in less than one month of its rejuvenation. The others are Francis Zaake (Mityana Municipality), Patrick Nsamba Oshabe (Kasanda South) John Baptist Nambeshe (Manjiya), David Kalwanga (Busujju) and Latif Ssebaggala (Kawempe North).

Speaking at the unveiling of the new members, Kyagulanyi said this was a dream come true for him. Kyagulanyi who was recently unveiled as the president of NUP, said the defection of prominent legislators has given him and his party impetus to continue fighting President Yoweri Museveni and bring the much-needed change in Uganda.

According to the 2015 constitutional amendment, an MP is free to change his or her political party in the last year to the end of their term. However, according to speaker Rebecca Kadaga, the change in allegiance will only take effect in the next parliament.

“If someone comes to parliament as an FDC member, he will continue to be FDC until the end of the term because it’s FDC that sponsored them. The law only allowed them to change for the next cycle of elections,” Kadaga said.

It’s not only DP that has suffered defections in recent days. Even the biggest opposition Forum for Democratic Change (FDC) has had two of its members switch sides to join Alliance for National Transformation (ANT). These include Winnie Kiiza, the outgoing Kasese Woman MP and Jinja East MP Paul Mwiru.

Mao says the departures were expected since the defectors' actions in the past months demonstrated that they were not aligned to their party anymore.

But of late , I have observed that he has lost his fire .

Instead of growing DP , he is buzy explaing Museveni`s moves and actions-- sometimes sounding like he is an NRM spokesman.

I get dissappointed when Mao plays the tribal card , accusing baganda for not accepting him , as if he has anything to show in terms of notherners he has either recruited or retaned in DP.

Records have it that Acholi was predominantly DP besides Buganda. Durng Mao`s presidency, DP has zero MP left from Acholi
Kiiso kya mbuzi ....?

Fortunately , DP is not about to die. I know for a fact that those who have now switched to NUP are doing so for tactical reasons . At heart , they are all DP . That includes Major Lukwago who defected to FDC.
Report to administrator
+1 #3 Lakwena 2020-08-14 09:21
Because they are opportunistic like the HIV/Aids virus; political flip, flop, flappers are not leaders but followers.

They are predictably unpredictable. Like jay walkers, motorists always have to be on the lookout, because a jay walker would suddenly cross the the road and bang!

In other words, they can't compete squarely and win squarely. That is how political new comers/rookie like Hon Kyagulanya lead and they shamelessly follow.

I had a lot respect for e.g., Hon Segona, a mature intelligent legislator who should be leading. But he now behaves like an adult who wants to eat amog children and quarrel over menvu.
Report to administrator
0 #4 Apollo 2020-08-14 18:25
We must not forget "good DP". When Gen. Museveni coined the term, Mr. Mao did not go on record about this. That silence was loud and clear. "Good DP" was a huge political dichotomy echoed by its chief architect Gen. Museveni.

It was a triumphant announcement and a watershed moment. With the 11 MPs publicly crossing, can be described as a visible manifestation of this reality.
Report to administrator