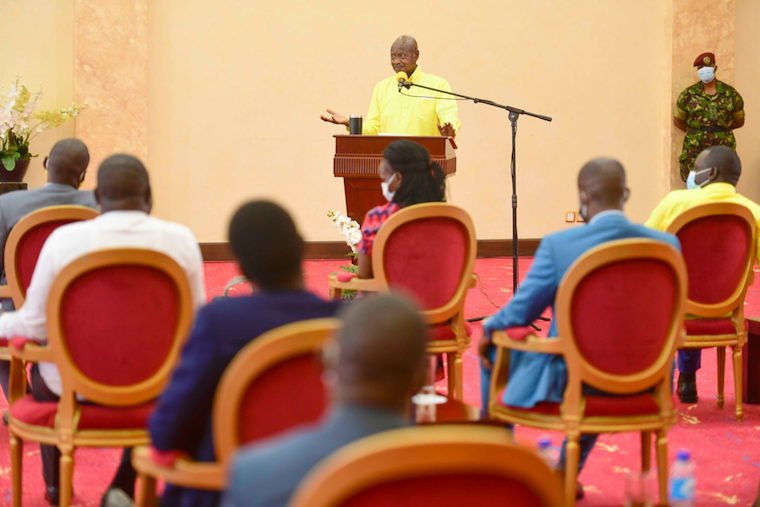 President Yoweri Kaguta Museveni has urged Ugandan youths to stop sleeping and engage more actively in commercial production so as to get out of poverty.
The president said that Uganda's youth are fond of sleeping and talking most of the time, with just a few partially awake and involved in subsistence production but only focussing on survival.

Museveni made reference to his life journey and highlighted that at 14 years, he was already engaged in farming and gaining skills for commercial agriculture at a government ranch in western Uganda. Museveni was speaking from the State Lodge in Nakasero at a function to commemorate the International Youth Day.

The theme of this year’s International Youth Day, “Youth Engagement for Global Action," highlights how the engagement of young people at the local, national and global levels is strengthening national and multilateral institutions and processes.

But Museveni says Ugandan youth still have a way to go, first by acquiring skills and specialising - a basis for grabbing the opportunities in the various sectors of production. He also reiterated a call against land fragmentation that he says has crippled efforts for mass production in the country.

He expressed dismay at the fact that Ugandans, despite available resource, cannot satisfy existing markets. He cited Uganda's failure to supply animals to the Egypt-Uganda Food Security company, a facility with a holding capacity of 5,000 animals and with a possibility to slaughter 400 animals every day. He adds that if Ugandans worked collectively, they would be able to raise the required supplies for the market.

"Even the ancient Banyankole were more organized than our people today…Each one had a mwooga - traditionally you were either a cattle keeper or a crop person or blacksmith. If you were a blacksmith they know that that family they are blacksmiths. They don’t do other work and they concentrate on blacksmith. Other people grow food and bring it to them and then give them and exchange with blacksmith products. That is why I brought that word; omwooga which is a specialization - blacksmith or carpentry…But now you have someone here and he has nothing and is just there that is why we’re saying no belong to or target or belong to one of the activities. And if it is agriculture, we have advised you how to do it." Museveni said.

Meanwhile, as part of the celebrations, Museveni launched the Youth4Business Innovation and Entrepreneurship Facility founded by the United Nations Development Program (UNDP) to enable youths and businesses pilot innovative enterprising ideas on delivering their services.

The United Nations resident coordinator in Uganda Rosa Malango says a UN social-economic analysis of the COVID-19 impact in Uganda, indicates that 60 per cent of informal enterprises have stopped their operations or moved below the poverty level denying income to between five to six million informal workers, most of whom are youths.

She says the UNDP facility seeks to provide flexible funding mechanisms that will stimulate the faster recovery of micro, small and medium enterprises. Ultimately, it will create 20,000 new jobs for youths, ensure skilling of 50,000 youths to increase the entrepreneur success rate and create over 100,000 indirect jobs over time, she added.

Elsie Attafuah, the UNDP country coordinator says the facility has three components, an innovation challenge fund and growth accelerator where youths can pitch ideas and receive funding of up to $40,000 (about Shs 147 million) in grant resources. Also, a fund for micro, small and medium enterprise.

The third component is the youth entrepreneurship and innovation ecosystem platform which Attafuah says will revitalize youth networks such as youth Saccos and youth connect such they can collectively identify and tackle systemic issues impeding the social-economic empowerment of young people. This will include training and skilling.

Ann Juuko the executive director of Stanbic bank says youths will get loans at a 14 per cent rate, a percentage the president says is still high and should be lowered to utmost 12 per cent.

Thanks to Obote (RIP) who empowered many of you and at the age of 14(???) you took up farming. Not to mention that you were also a member of the UPC youth-wings movement.
Robert has done more for the youngsters in just a few years than M7
Report to administrator
+2 #3 BwineUk 2020-08-13 20:45
What activities are his kids doing that are not state funded?
Report to administrator
-3 #4 Wainaichi 2020-08-14 04:35
Spot on Mr President. Many of them and even some senior folks like to have easy money without sweatvandvtars.

Howrver that is not normally possible nowhere and people have to understand and be aware that work'work and work not politicking and debating brings better life.It can happen in the short run'but later they can clearly see the results
When the money runs out they are left broke like before.

If 'for instance 'people engage in serious work and hard labour' it will bear fruits and they'their families and the country will be happy and Prosperous.
Report to administrator
0 #5 SimonS 2020-08-14 10:27
They are poor due to overpopulation. Smaller Families Please Everyone.
Report to administrator
+4 #6 Lakwena 2020-08-14 15:14
Like Momus the Greek god of blame, Mr. M7 never fails to blame his victims of 35 years of maladministration; characterized by a pandemic of corruption, abuse office, power, nepotism, cronyism, tribalism and crime against humanity.