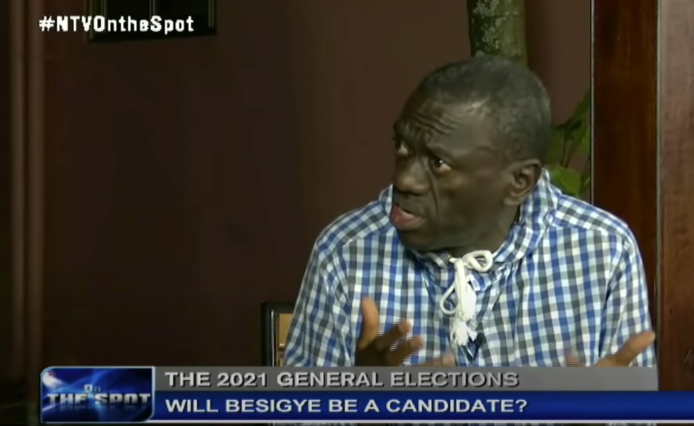 Answers, they say, can hide from anything but questions. But that assertion doesn’t seem to hold true after close scrutiny of a transcript of last week’s NTV interview with DR KIZZA BESIGYE.

Asked several times by Patrick Kamara, host of NTV’s ON THE SPOT programme, whether he will be on the ballot next year as a presidential candidate, Besigye’s answers were anything but simple and straightforward. The founding president of the opposition FDC walked his way around the persistent questions. Below is the transcript.

Kamara: Something is wrong here.
Besigye: Yes.
Kamara: Dr Besigye, am I going to make this question precise?

Besigye: You see this question that has gripped the country of my candidature and candidates is engineered by some interests. It’s an agenda by some people, not my agenda, but which you and many other people want to conscript me into an agenda to look for candidates. Candidates for what?

The reason I am saying it’s a wrong question is that the political challenge of Uganda is not getting a president; this country should not be fighting to get a president. It’s wrong for this country to be gripped by looking for the president, it’s wrong.

Kamara: Dr Besigye, I have been with you on the presidential trail when you have offered yourself to lead. In spite of what you have said, my simple question is whether you will offer yourself as a vessel for leadership in 2021 so that your name is on the ballot to transform Uganda.

Besigye: The reason we have a lot of engagement over this is because there is a fundamental confusion deliberately engineered in Uganda. You see, a country that is looking for a president is a country where its people have the power to choose one [president].

Kamara: Because you and your colleagues decided to pick guns and came with guns blazing in Kampala, how could I have seen it?

Besigye: So someone is deliberately constructing a wrong question for the people of Uganda and misdirecting them to believe that they will be participating in choosing a president, and so we are conscripted into becoming candidates; that there is an electoral roadmap, whose roadmap?

That is where I fundamentally differ. The questions then come, if it is a captured state, why are you engaged in political processes in the country? Yes, I participate only as part of manoeuvres to liberate our country.

Kamara: I am asking whether as part of your manoeuvre tactics, you are going to manoeuvre yourself onto the ballot paper and your name will be on it despite the hurdles.

Besigye: If you are going to get the answer, understand what those manoeuvres are. Every time I have become a candidate, I have not been massively sought out by the media. Did you ever seek me out on whether I will be a candidate? Has anyone ever sought me out to see whether I am candidate? Candidates are not hunted for but they offer themselves.

Kamara: What has changed fundamentally from the past where you offered yourself without being sought out like now?
Besigye: Understand. The reason indeed these questions come up, that misunderstanding of what the country’s political processes are about is maintained because we give it credence by focusing your cameras and the country in that fake process...I am saying I will not facilitate anybody with myself to focus on the wrong thing of candidature as an issue facing this country.

Certainly, I want that focus to shift whether I will be a candidate or not, and if by not going to become a candidate forces you to raise these questions, it gives me the right opportunity to tell our countrymen that our focus should not be manipulated- which is what is being done- manipulated into a political process that doesn’t answer our needs. 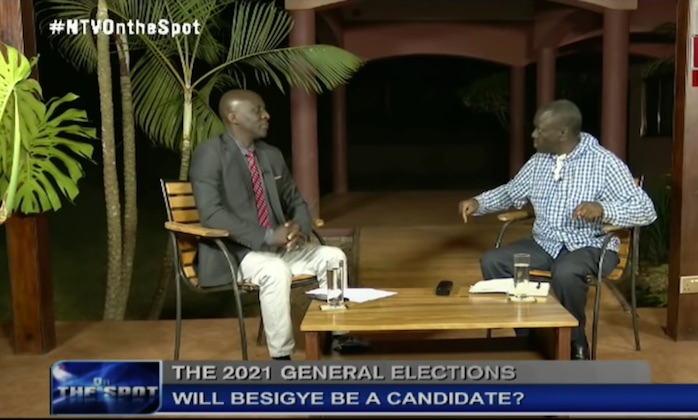 Kamara: Where is your focus?

Besigye: The political process that exists today, the roadmap in place is a roadmap to the gallows. It’s not a roadmap to FREEDOM. We must chart our own road to freedom. That is why I tell you the challenge of this country is not leadership; it’s freedom. PEOPLE WHO GET LEADERS ARE FREE. And they use that freedom to get leaders.

We are not free; we are not living in a free country. Now for someone to manipulate us to behave as if we are free; to present ourselves to his processes, it is like causing an election in Luzira prison for inmates to choose head prisoners and prisoners take it very seriously. And it becomes their priority to choose their head prisoner, instead of focusing on how to get out of prison.

That manipulation must stop. The manipulation that there is going to be registration, nominations, etc, when all processes are controlled by our captors. That must change, the conversation must change. And if by not answering your question (of whether I will be a candidate), we can focus Ugandans onto the right questions of whether Uganda is a free country; is there rule of law in Uganda; are there freedoms and rights in Uganda? And if they are not there, can you have a VOTE? Do the people of Uganda actually have a vote without freedoms and rights and rule of law?

Kamara: I will ask for the very last time, what has fundamentally changed this time that you cannot think of being on the ballot at this time and yet for four times, in the same country, in the same system, you offered yourself?

I would never have gone to the bush if I had not been grabbed in Kampala here minding my business and tortured to near death, from where I escaped into exile. Those things don’t happen in a country you call home and have rights.

Today, people are grabbed and taken to safe houses and some die there. In this country courts of law and parliament are attacked by soldiers in broad daylight, on camera, that is not a country where you should be asking a question about candidates.

Ugandans have supported you 4 times despite the fact that you always said elections cannot remove Museveni.

Your thinking that you own the opposition has led to the crumbling FDC turning it into the Forum for Delaying Change
Report to administrator
-4 #2 Jonathan 2020-08-12 11:11
There is no difference between president Museveni and DR. Besigye .

They are both suffering from the same disease; greedy for power. They both arrogantly think Uganda without them, will not move on.
Report to administrator
-3 #3 Wooden K. 2020-08-12 11:29
Here is a smart suggestion :
Dr.Besigye , Gen.Muntu , Gen.Tumukunde and all the others that want to be elected as Presidents must show 0r prove that they are electable.

I am saying that Dr.Besigye should stand as an MP for Rukungiri ,and fight it out with Tumukunde. The winning MP can then go ahead and stand for the Presidency.

It is said that Gen. Muntu is very popular and respected as a good organizer. The question is why he can`t go and stand as an MP before the goes for the big one.

At this point , only Kyagulanyi owns the claim that he is electable .
Report to administrator
+2 #4 Wooden K. 2020-08-12 11:41
Yoweri Museveni was rejected by his own people of Nyabushozi during the 1980 elections .

That was a warning that he is not "electable" ,
No wonder when he come in by other means , he showed no respect to the concept .

Museveni is very sensitive to being rejected ( as his people did in 1980) Deep down , he hates & disrepects elections. That explains why we are stuck with him
Report to administrator
+2 #5 naboma 2020-08-12 12:12
Quoting Jonathan:

There is no difference between president Museveni and DR. Besigye .

They are both suffering from the same disease; greedy for power. They both arrogantly think Uganda without them, will not move on.

Sure?When besigye stands he is greedy for power, when he refuses he is also greedy for power?Are you for real?
Report to administrator
0 #6 Jonathan 2020-08-12 15:31
Quoting naboma:

There is no difference between president Museveni and DR. Besigye .

They are both suffering from the same disease; greedy for power. They both arrogantly think Uganda without them, will not move on.

I was reacting to Dr Besigye',s refusal to answer the question whether he will contest the incoming Presidential election in Uganda.

If he Busigye contest incoming Presidential election, he will not differ from his former boss president Museveni, who is greedy beyond any measurement
Report to administrator
0 #7 Akot 2020-08-12 16:38
PaulK, thanks.

It's the people who have the power to end this meaningless appearences of so called opposition leaders, who have up to now helped Museveni just terrorise, enslave Ugandans!

Being opposition leaders means; calling people to UNITY first & above all things!
Report to administrator
0 #8 Akot 2020-08-12 16:47
Jonathan, thanks.

Ugandans must become actors to ensure it's them who decide who governns them, how, for how long or they will be played with by fake opposition leaders ensuring Museveni's post!

Lebanese were already out on streets to call their useless government, responsible for the tragedy that occured, to stand down!

So called Uganda opposition leaders should be the first to know that no election held under Museveni will bring any other than him to the post, but they continue helping him legalise his post through fake elections!

A real opposition leader would call tribal leaders to stand down or those who want to be independent to do so right away, so that the situation is clear!
Report to administrator
0 #9 David 2020-08-13 20:58
Uganda is a very unique country, it is the Pearl of Africa, sadly very few understand the uniqueness of this our country.

Even our leaders hardly understand this country itself.

It suffices to say: O Uganda, May GOD Uphold Thee.
We Lay Our Future In Thy, GOD's, Hand. ...
Report to administrator