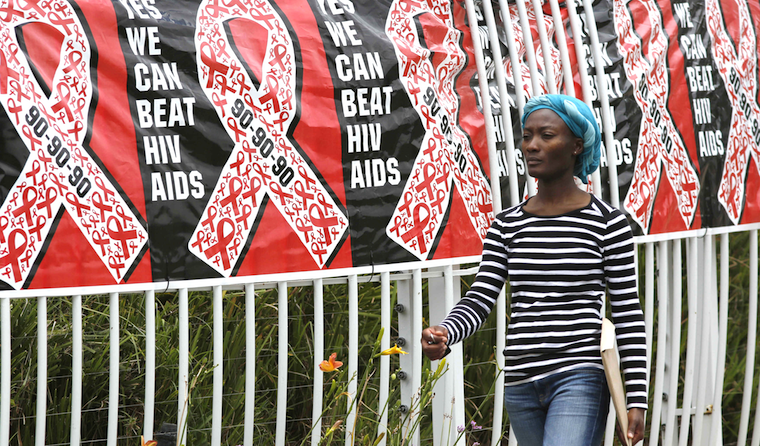 A woman walks past a an HIV banner in South Africa

Eastern and Southern Africa has recorded a huge fall in new HIV infection since 2010 compared to other regions, the latest UNAIDS 2020 global report has found.

Statistics from the UNAIDS show that at least 72 per cent of people living with HIV in the region are on treatment, and 65 per cent have suppressed viral loads.

Globally, an estimated 1.7 million people acquired HIV in 2019, marking a 23 per cent decline in new HIV infections since 2010. This is the lowest annual number of new infections since 1989, according to UNAIDS.

By contrast, the pandemic continued to grow in Eastern Europe and central Asia, with new HIV infections rising by 72 per cent between 2010 and 2019. There were also increases in the Middle East and North Africa (22%) and Latin America at 21 per cent.

The latest findings come at time when the eastern and southern region is also closing in on the 90-90-90 testing and treatment targets. Already, seven countries; namely Uganda, Botswana, Eswatini, Namibia, Rwanda, Zambia and Zimbabwe have reached their fast-tract targets. This, according to the report, is a remarkable achievement within a region most affected by the HIV pandemic.

These countries are joined by seven others from two regions that also achieved their targets by the end of 2019. These are Australia, Cambodia, Ireland, Netherlands, Spain, Switzerland and Thailand.

The report notes that each of the 14 countries has used epidemiological and programme data to dig deeper and bring HIV services closer to the underserved sub-populations.

However, the report also found alarming gaps in HIV testing and treatment in many countries that are likely to spark an increase in infections. Testing gaps were particularly large in Madagascar and South Sudan, while in Angola and Mauritius, there are large percentages of people living with HIV who know their status but are not on treatment.

In the wake of the Covid-19 pandemic, the UNAIDS executive director, Winnie Byanyima urges countries to ensure that the disruption of access to HIV services is minimized.

“Our progress towards ending AIDS as a public health threat by 2030 was already off track before the Covid-19 outbreak. Now, this crisis has the potential to blow us even further off course,” Byanyima is quoted as saying in the report’s foreword.

Byanyima said that modelling conducted on behalf of UNAIDS and the World Health Organization has shown that a six-month Covid-19 disruption to medical supplies could result in an additional 500,000 AIDS-related deaths in sub-Saharan Africa alone by the end of 2021.

“We cannot allow the hard-fought gains made in the HIV response to be reversed especially as there is still so far to go to finish the job,” she said.

To sustain the progress reached so far, the report indicates that countries in the eastern and southern region need to effectively address the gender dynamics of the epidemic. For instance, in 2019, three in five new infections were among women while the incidence of HIV infections among girls and young women aged 15 to 24 remains inordinately high compared to their male counterparts.

According to the report, unequal gender norms have left far more women than men infected annually. In 2019, there were 12.3 million women living with HIV in the region compared to 7.3 million men.

“The higher rates of HIV testing, treatment coverage and viral load suspension among women, however, translates to lower AIDS-related mortality rates among them compared to men. Despite the much larger HIV burden among women, there were more deaths among men at 130,000 than 120,000 women in 2019,” reads the report.

Byanyima said these statistics are a call to action since they highlight the scale of HIV and how it runs along the fault lines of inequalities.

“We know how to treat HIV and how to prevent people from becoming infected. What we desperately need is a different politics to guarantee that everyone everywhere has the right to health. This must include concerted efforts to dismantle the injustices and inequalities that put young women and girls, people who use drugs, prisoners and migrants, among others at greater risk of becoming infected with HIV,” she said.

UNAIDS calls for a comprehensive approach including combination prevention programmes that take account of gender inequalities, improving girls’ access to secondary education which can have a protective effect against HIV as well as increasing access to sexual and reproduction health services.

The sex workers are out of business. In other words, one hand washes the other.
Report to administrator