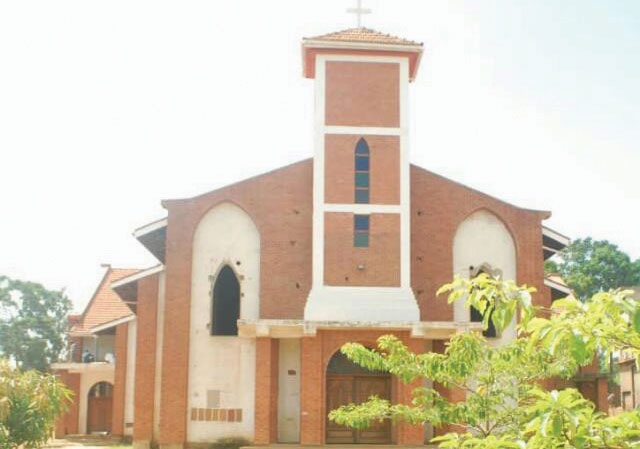 The church before it was razed to the ground

The bishop of Namirembe diocese, The Rt Rev Wilberforce Kityo Luwalira has expressed dismay at the demolition of St Peter’s church, Ndeeba.

The 40-year-old structure was razed under the cover of darkness, purportedly over a longstanding wrangle between the church leadership and a businessman only identified as Dodovico. For several months, the building was guarded by police.

“Today [Monday, August 10) we woke up to a disheartening development about the demolition of the church in Ndeeba...very unfortunate for an issue which has been handled since 1981 to conclude in such a manner. It hurts all of us and in a special way the Christians of St Peter’s Church Ndeeba,” the bishop said in an audio statement issued Monday.

He added that the beauty of the church structure was a clear manifest of the effort Christians invested in putting up the magnificent church, which was razed within minutes. Sadly, he added, callous people took advantage of the night curfew to erase the church history.

He appealed to Christians to continue focusing on God and take note of the trying times during which evil is being dignified. Bishop Luwalira said the act will not destroy the belief of the people.

Luwalira said land grabbers all over the country should rethink their actions. He assured Christians that the Church will not be derailed from spreading the gospel.

In a statement issued Monday, Kampala Metropolitan Police spokesperson Patrick Onyango said police  opened an investigation into the demolition of the church and three police commanders were arrested.

They are David Epedu, the Katwe divisional police commander, Mugira Yeko Kato, the officer in charge of Ndeeba police Station and Isabirye Kaloli, the Kampala Metropolitan South Region Field Force Unit (FFU) commander. According to Onyango, the officers have been charged with neglect of duty.

0 #1 Lakwena 2020-08-12 08:47
Unbelievable! Even the unthinkable like the demolition of a church, is apparent that all the abominations anybody can think of, can be committed in this country under the watch of the NRM leadership.

Why? It is because Mr. M7 and his NRA/M came to power through committing abomination of e.g., killing fellow countrymen, women and children in the name of power; and displaying their skulls/skeleton on the roadside like cabbages and sugarcane.

In which African culture are the remains of the dead (even of a stranger) displayed on the roadside for purposes of demonizing a political opponent?

Many Ugandans have already forgotten the shocking abomination of the destruction of Shimoni Demonstration School.
Report to administrator
0 #2 Lakwena 2020-08-12 08:52
Patrick Onyango should give Ugandans a break because, under his watch and conscience, the word "investigation" is a meaningless dirty word.
Report to administrator
0 #3 Jonathan 2020-08-12 11:41
What did the poor police men , Muhammad Kawooya,Muniru Bbosa,Amza Kiberu, Habasa Mutebi, Alisema Bulega,Simon Matovu and company do to deserve the arrest while the real culprits including a land grabber ,who went to court and secured a demolition order and a blockhead judge , who ordered the demolition of a church , are Scot free.

My question to Nakalema of this world is : did these police men whom Nakalema arrested go to court and claim that Land belong to them?
Report to administrator
0 #4 Nalongo Mutiima 2020-08-12 12:10
Police commanders don't wake up, mobilse people to demolish a church without receiving orders from above.

You are arresting the wrong people; some fat cat who is at large is behind this terrible act.
Report to administrator
0 #5 Moz 2020-08-12 16:54
Many people are shooting from the hip about this. There was a protracted legal process where witnesses and documents were examined.

The court concluded that some people stole from a dead woman's children. Forged signatures. Acquired the land and special titles fraudulently.

The widow of one of the bishops refused to participate in the fraud, asking how her late husband's name could have gotten onto the fraudulently acquired special title!

Now, some Ugandans are making noise about demolishing a "church" which came into existence by breaking the laws of the land and the Laws of God!
Report to administrator
0 #6 Wooden K. 2020-08-12 20:44
Dodoviko was a simple mechanic who just got the job of fixing army vehicles. This how he started acting as a surrogate for some powerful army officers to "supply air " .

Within no time , Dodoviko abandoned his job as a mechanic , moved to Kololo and started buying property everywhere , .

It is highly suspected that the property in question actually belongs to one army officer ; which explains why the army was involved in this activity while the police feared to interfeve.

This is a good thing because religious leaders have for long kept quiet about the many things going wrong under Mr. Museveni's watch.

The religious leaders thought that being co-opted into the NRM thieving/bribery culture would give them and their institutions immunity.
Report to administrator
0 #8 Wooden K. 2020-08-13 12:52
Miki, did you hear what the Bishops asked Falim Saleh to do for them ?
They want money , money and more money . As usual the good General promised money monet and more money.

Before Saleh showed up to deny and deny , the Bishops were asking the ones on power to protect the powerless.
You would think that this is what they would have insisted on telling Saleh.
Report to administrator