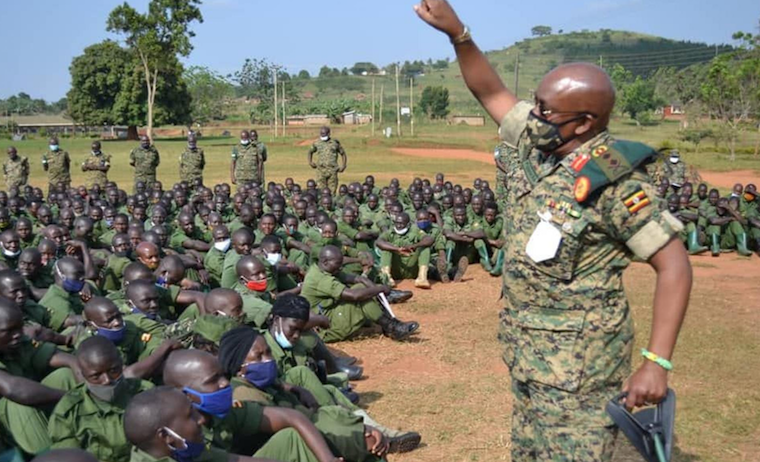 Freshly retrained Local Defense Unit (LDUs) personnel have been barred from any daytime security operations by the Uganda People’s Defense Forces.
A statement by the newly appointed Defense ministry spokesperson, Brig Flavia Byekwaso, says although LDUs who have completed a refresher training are going to be redeployed, their role is restricted to strengthening night operations to curb crime.

According to the statement, the LDUs will also participate in intelligence-led operations on specific targets on request and support of the Uganda police force.
“The LDUs shall not participate in daytime enforcement of Covid-19 directives outlined by ministry of Health and head of state,” Brig Byekwaso said.

Over 10 people have been killed by LDUs and other security operatives while enforcing Covid-19 preventive directives and guidelines. Some of the victims include Eric Mugasira, the Mukono headteacher and Margret Nanyunja, a resident of Kyengera.

Brig Byekwaso explains that several local leaders and members of the general public have been complaining that the withdrawal of LDUs has seen an increase in criminal activities particularly during night hours.

“Owing to the withdraw of LDUs from active operations to go back for refresher training, the level of criminality has since increased especially during the night. Severally, local leaders and the general public have petitioned security leaders to re-engage them in order to contain the situation,” Brig Byekwaso said.

More than 6,000 LDUs were withdrawn from Kampala and taken to Kakiri army barracks for refresher training. The training was majorly on crowd control, firearm handling and human rights observance.
Maj Gen Leopold Kyanda, who is also the chief of staff Land Forces, last week urged LDUs to work towards being citizens with a reputable image. Although Kyanda applauded LDUs for their contribution in fighting crime in Kampala Metropolitan areas, he said the few isolated cases of indiscipline have tainted the image of UPDF.
“In the UPDF, we have no space for any form of indiscipline. There is no amount of indiscipline that is small to us. A mere abusive language or annoying gesture to the civilians is too grave an act to do. You must work towards correcting these mistakes as you conduct your operations,” Kyanda was quoted in a statement issued by Lt Col Deo Akiiki.

Kyanda said the refresher course is very necessary for the LDU’s ideological growth, a prerequisite in their career in UPDF. He said it is important that LDUs grasp every bit of the lessons taught, saying it would help them in their day to day life and in the distant future.