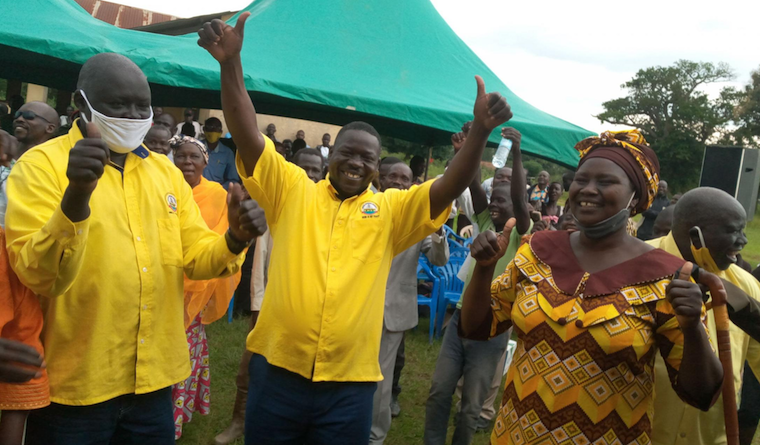 Bernard Atiku has joined NRM from the opposition

Atiku who is serving his second term, joined parliament on the Forum for Democratic Change (FDC) ticket in 2011. However, he fell out with the party and contested as an independent candidate in 2016 although he still remained within the opposition circles.

On Sunday, Atiku officially announced that he had changed his alliance and would seek re-election through the NRM party. The MP told several supporters and witnesses who converged at the Ayivu County headquarters at Onduparaka trading centre that he will still work to ensure that the people of Ayivu, get their share of the national cake.

According to Atiku, his decision to join NRM party is influenced by the desire to be a new breed and change agent in NRM so that it’s clean and corruption-free.

"Today is a historic day in my life because as you have all witnessed, I have fulfilled all the requirements of me to be able to secure the nominations of NRM. What people should expect is a new breed of NRM. For long the people of Ayivu have yearned to be at the centre of decision making in this mighty political party called NRM. I believe am coming as already made material to do this work." Atiku said.

"My coming to NRM is a well-thought-out decision, I have not been lured, it is a personal decision. There are people who are heartbroken, I will remain a friend. So my appeal to those who are actively involved in politics is to join the NRM like I have done today so that we struggle from within. So I come in as one of the change agents to ensure that NRM is a clean party." he added.

Arua district NRM vice chairperson Joyce Amaguru,  who officially received and dressed Atiku in yellow attire to signify his alliance with the party, applauded him for making the 'right decision', which will make it easy for him to lobby from the government. According to Amaguru, the people of Ayivu have lagged for long because of electing MPs affiliated to the opposition party.

"On behalf of the NRM fraternity, am very grateful to receive honourable Atiku into NRM party and NRM party welcomes anybody who is willing to join. For us, as NRM we know that honourable Atiku has followers who will also definitely join the NRM party. It is not easy to lobby when you’re in the opposition. So we feel that our MP of Ayivu has done well to come and join the mighty party of NRM so that he will be able to lobby easily for the people of Ayivu," Amaguru.

Nahori Oya, the resident city commissioner Arua who presided over MP Atiku’s official introduction and unveiling to NRM castigated the people of Ayivu for delaying to realize the need to be with the ruling government over the years.

Following the creation of Arua City, Ayivu Division has now been split into two constituencies of Ayivu East and West. Atiku has now become the first and more likely the only NRM flag bearer in Ayivu West and stands a high chance of being unopposed since all his potential opponents have been cut off to East Ayivu.

Think of this one, "According to Atiku, his decision to join NRM party is influenced by the desire to be a new breed and change agent in NRM so that it’s clean and corruption-free!". Interesting, isn't it???
Report to administrator
+3 #2 Nalongo Mutiima 2020-08-11 09:21
A new breed... clean NRM within bla bla bla. If NRM rebel MPs have failed to clean NRM from within, what is Atiku saying?

By the time NRM will be history, it will have left a breed of disgusting political prostitutes with no conscience to look in the eye Ugandans, victims of greed, sectarianism, corruption, dictatorship and rot.
Report to administrator
0 #3 Moz 2020-08-11 21:19
What did someone say about the stupidity of flies? Mbu they follow the body to the grave and get buried too!
Report to administrator
0 #4 Jama 2020-08-12 19:55
If those who were before you in nrm, failed to bring change what miracle will you perform to realize the nonsense you uttering?

You have not only betrayed those who elected you but you have proved how corrupt you are.
Report to administrator