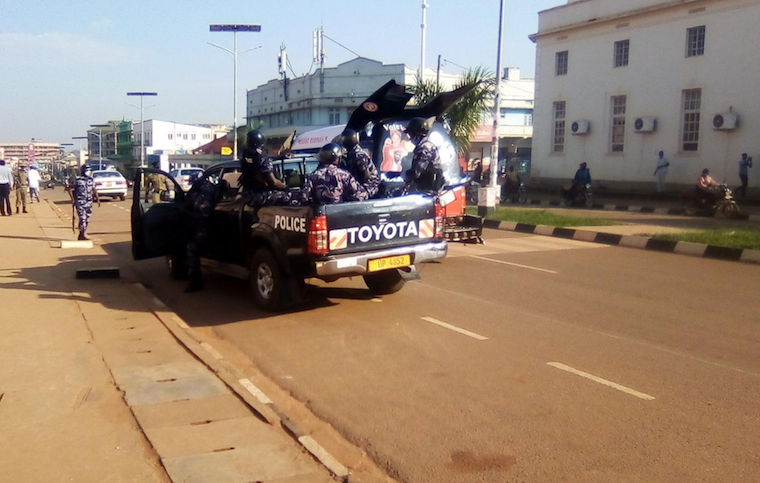 At least nine people have been arrested as police fired teargas and bullets to disperse supporters of Kyadondo East MP Robert Kyagulanyi aka Bobi Wine in Mbale today.

Those arrested include Abbas Wetaaka, the Mbale district People Power coordinator, Yusuf Kadama, the Nakaloke town council youth councillor and youth coordinator for People Power in Mbale, Judith Khakai, Abby Mutebi, Farouk Kato, Sam Ssenyonga, Kato Mulongo, Aqiram Kasirivu and Richard Musajjaawanza. They were arrested in skirmishes with police that had deployed to block  Kyagulanyi the president of the National Unit Platform (NUP) from appearing on a radio talk show at BCU FM.

Kyagulanyi was expected to appear on BCU FM between 9:00 am to 12:00 pm together with Manjiya County MP John Baptist Nambeshe, Mbale district Forum for Democratic Change chairperson and Margret Wokuri, one of the aspirants for the Industrial City Division parliamentary seat. Despite paying Shs 1.2 million to the station, Kyagulanyi was blocked by police from appearing on BCU FM.

Police used live bullets and teargas to disperse the supporters from the radio premises on Naboa road in Mbale. According to police, the suspects have been charged with staging illegal gatherings, which can cause the spread of the Covid-19.

Rogers Taitika, the Elgon Region police spokesperson, says the suspects were intercepted in a vehicle belonging to one of the aspirants for the Mbale Woman MP seat.

John Baptist Nambeshe, the Manjiya County MP and NUP coordinator for Bugisu region says they are going to sue police for stampeding their programs and tearing his People power attire he was wearing. He also blasted Electoral Commission for failing to prevail over the excessive powers of Police.

The arrest of Kyagulanyi's supporters happened on the same day when police once again looked away as the minister of Finance for Investment and Privatization who belongs to the ruling National Resistance Movement party, held a campaign procession in her home area in Koboko, attended by hundreds of people. This week, police said they had banned processions for candidates due to the coronavirus pandemic, only limiting politicians to move with just two people.

NUP spokesperson, Joel Ssenyonyi warned security against continuing to break the law by blocking Kyagulanyi from appearing on radio stations yet the Electoral Commission has sanctioned digital campaigns on radios and TVs. He says the officers mounted roadblocks on all roads leading to the station and directed management not to host Kyagulanyi.

"We’re saying that this is a warning, we’re not going to be bargaining for this because Uganda Police Force and the armed forces you’re not above the law. And going forward, we’re going to go after individual officers that are frustrating Hon. Kyagulanyi’s efforts to speak and engage in the media space because government has said we can only engage therein." said Ssenyonyi.

Ssenyonyi recalled a similar incident where the host and producer of a similar radio talk show on Baba FM in Jinja city were summoned for hosting Kyagulanyi two weeks ago.

He said that such incidents contravene the revised election roadmap that was issued by Electoral Commission directing aspirants to conduct most of their political engagements on the internet and via media platforms like radios and televisions.

Ssenyonyi revealed that they have now resolved to sue individual personalities both in government and in security forces abusing their constitutional rights while hiding under institutions. He said the party will no longer stop at complaining and crying out to their tormenters but will use legal means both at the local and international levels.

"So why is there a situation, it's okay for some for the Museveni’s to engage on radios and TVs but it is not okay for honourable Kyagulanyi Ssentamu to engage in the media. We’re saying what is good for the goose should be good for the gander and we shall not keep complaining and sending warnings. We’re going to take actions - legal action in every sense and internationally because Uganda is part of the international community. We’re not going to watch by as our rights are being violated." he added.

Godfrey Kakungulu, the BCU FM manager said security had warned him not to entertain Kyagulanyi at the station, saying he would attract members of the public. He, however, explains that he informed the district security team that he had only invited Kyagulanyi and three other panellists and asked the police to do their mandate and keep crowds away from station.

“But to our surprise police turned away everyone including Kyagulanyi,” he said.

Taitika says Kyagulanyi shouldn’t have organised a political rally in the middle of the city if he wanted to appear on a radio talk show.

+4 #1 Lysol 2020-08-09 03:11
It simply shows us how desperate and insecure the 83 years old Museveni is doing everything to hold onto power. In the Natural law, a youngster must displace the old one.

He must be prevented to talk since he is chetear and liar.No passaran Dingo Pig.
Report to administrator
+5 #5 bwineuk 2020-08-09 16:37
Ugandan police more useless than ever. can never have intelligence on real crimes but always know where m7 opponents are.

is it because only m7 will allow the current police force to carry out criminal activities like accepting bribes, billing civilians to do half work investigations, rent guns to criminals. opposition going to a radio station scares m7. talk about weak scared leaders
Report to administrator
+3 #6 Jonathan 2020-08-09 18:57
Quoting Wainaichi:

He must be prevented to talk since he is chetear and liar.No passaran Dingo Pig.

If Bobi wine, is a liar as you claimed , what about president Museveni ,who promised to provide free food and masks to longtime suffering people of Uganda , during lockdown? But he never filled his promises.
Report to administrator