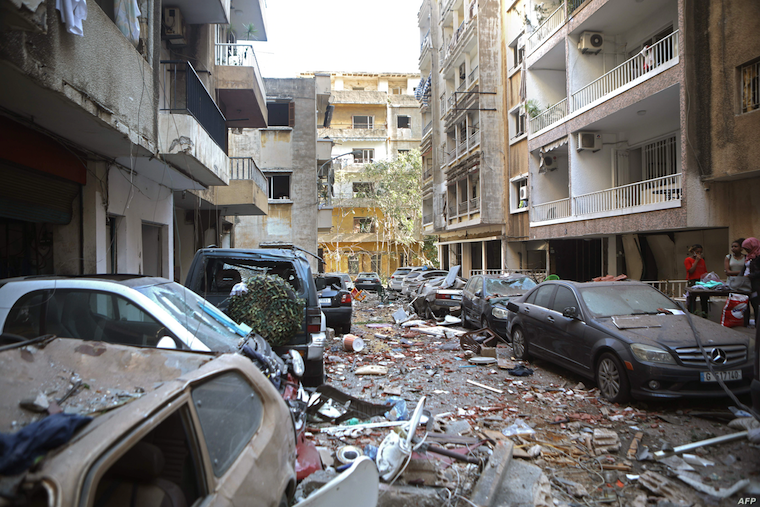 A view of the partially destroyed Beirut neighbourhood of Mar Mikhael on Aug. 5, 2020 in the aftermath of a massive explosion in the Lebanese capital

Lebanon’s cabinet declared a two-week state of emergency Wednesday in Beirut and ordered the military to place anyone under house arrest who was involved in warehousing explosive material that detonated at the city’s port, devastating entire neighbourhoods and killing scores of people.

The declaration effectively gives the military full powers after Tuesday’s massive explosion. The exact cause of the blast was not clear, but Lebanese officials put the focus on what they said was tons of ammonium nitrate that had been stored at port warehouses for the past six years.

Rescue crews continued their search Wednesday for survivors as Prime Minister Hassan Diab declared a day of mourning in the country. Officials said they expected the number of victims to rise as crews worked their way through rubble of damaged buildings and people searched for missing family and friends.

The explosion took place in the evening, sending a huge mushroom cloud into the sky and shockwaves that blew out doors and windows far from the port, overturned cars and damaged numerous buildings.   In the aftermath, hospitals were overrun with people seeking care.

The World Health Organization said Wednesday three hospitals in Beirut were heavily damaged in the blast and are not currently functional. The WHO said two other hospitals are only partly operational. The US Embassy in Beirut urged people to stay inside due to reports of toxic gases being released in the blast.

Leaders called for a quick investigation, with Diab pledging “those responsible will pay the price.”

Lebanese President Michel Aoun, who called an emergency cabinet meeting Wednesday, said those accountable would face “the most severe penalties.”

“It is unacceptable that a shipment of ammonium nitrate estimated at 2750 tons has been present for 6 years in a warehouse without taking preventive measures that endanger the safety of citizens,” Aoun tweeted.

In addition to wrecking the main entry port for a country heavily reliant on food imports, the blast also destroyed a massive grain silo at the site. Economy minister Raoul Nehme told Reuters on Wednesday that the country had enough grain reserves to last “a bit less than a month,” and that it needed reserves of at least three months to ensure food security.

The international community has responded with both condolences for the dead and offers to help the people of Beirut with recovery efforts.

French President Emmanuel Macron will visit Beirut on Thursday to meet with political leaders, his office said Wednesday. France previously said it was sending emergency doctors and several tons of medical equipment, while Russia said it would contribute a mobile hospital along with doctors.

Qatar is transporting field hospitals and medical aid to Beirut, according to the state news agency QNA. Jordan said it was sending its own field hospital and medical workers to Lebanon, while Iranian President Hassan Rouhani said his government stood ready to dispatch medical aid.

Czech Republic Interior minister Jan Hamaceck said Lebanese leaders had accepted his country’s offer to send 37 rescuers with sniffer dogs to help search for people in Beirut. The United Nations also said it was helping with the response and “remains committed to supporting Lebanon at this difficult time.”

A spokesman for UN Secretary-General Antonio Guterres said he “expresses his deepest condolences to the families of the victims, as well as to the people and Government of Lebanon, following the horrific explosions in Beirut today. He wishes a speedy recovery to the injured, including several United Nations personnel working in Lebanon.”

The United Nations peacekeeping force in Lebanon said the blast damaged one of its ships docked at the port and injured some peacekeepers.

“We are with the people and the Government of Lebanon during this difficult time and stand ready to help and provide any assistance and support,” UNIFIL Head of Mission and Force Commander Major General Del Col said.

US President Donald Trump told reporters at the White House on Tuesday that the United States “stands ready to assist Lebanon,” adding that the blast “looks like a terrible attack.”

When asked whether he was confident the incident was an attack, and not an accident, Trump said: “Well, it would seem like it, based on the explosion. I've met with some of our great generals, and they just seem to feel that it was. This was not a -- some kind of a manufacturing explosion type of event. This was a -- seems to be, according to them -- they would know better than I would, but they seem to think it was an attack. It was a bomb of some kind.”

The Department of Defense, when asked about Trump’s comment, referred VOA to the White House. The New York Times, Reuters and CNN all cited U.S. officials saying initial information about the explosion did not indicate the cause was an attack.

Former US vice president Joe Biden, who is opposing Trump in this year’s election, expressed sympathy for the victims of the explosion and urged the Trump administration and international community “to immediately mobilize assistance to the thousands injured in the blast.”

At the Vatican, Pope Francis offered prayers Wednesday for Lebanon.

“We are praying for the victims and their family members and we are praying for Lebanon because with the efforts of all of its social groups – political and religious – it can face this tragic and painful moment and with the help of the international community, it can overcome the grave crisis it is going through,” the pope said.

0 #1 Akot 2020-08-06 18:18
[“It is unacceptable that a shipment of ammonium nitrate estimated at 2750 tons has been present for 6 years in a warehouse without taking preventive measures that endanger the safety of citizens,”]

So, What was the impouned shipment with such dangerous material still doing there, forgotten?

It all comes to good governance & ensuring safety of people & environment, especially in a country supported, financed, built by International Community like Lebanon!

See, French president Macron hasen't visited all parts of his country so touch by Covid-19, but immediately went to assure Lebanese of French presence on their side, support, finance!

Why don't Ugandans want to be ONE people to get help & support from International Community?
Report to administrator