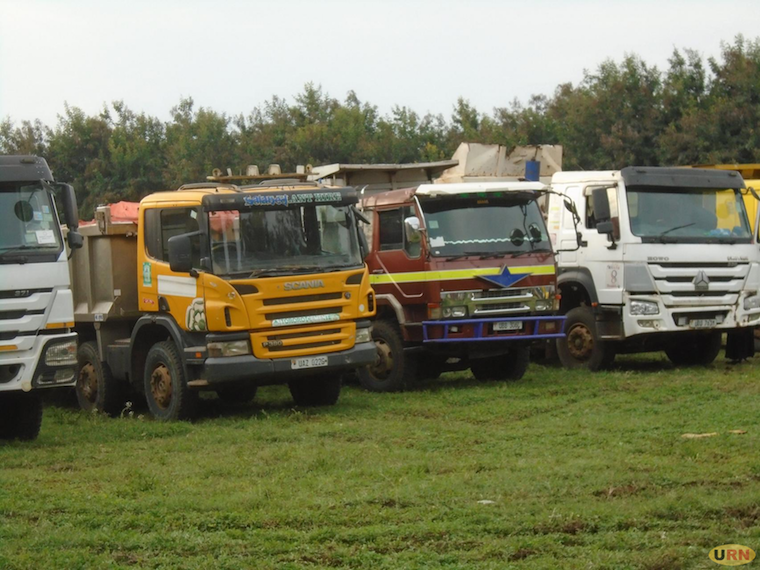 The operation led by the Moroto regional police commander, SSP Gerald Tushime also resulted in the arrest of scores of drivers. He said the trucks would be cleared on condition that Tororo Cement complies with licensing and tax policies and mining regulations as set by the government.

Tushime said the operations will continue until sanity returns to the mining sector in south Karamoja, which is threatened by the black market and a chain of middlemen. He added that the government was losing billions of shillings as a result of dubious activities in the mining sector.

Tushime warned that the drivers would be held responsible and face charges of transporting minerals illegally, contrary to provisions of the Minerals Act. According to the act, no one is allowed to process, smelt, refine, fabricate, cut, blast, polish, store, transport or trade-in minerals or otherwise deal in or possess commercial quantities of minerals without a licence issued by the minister.

"We’re telling them; go and tell your people [superiors] and have these documents in place. The operations will continue because it was realised that the ministry and the government [are] losing a lot of revenue because it seems much of the mining activities are on the black market. People are not bothered [with] verification to prove that so and so is a dealer in minerals and has got a licence. But never the less, right now they are our suspects because they are driving these trucks and onboard they have stones. But these goods they are not supposed to carry them without these documents." said Tushime.

The enforcement comes weeks after a sensitization drive conducted jointly by the police, officials of the ministry of Mineral Development and local government officials across the mining communities and companies dealing in the mineral sector. He adds that after the sensitisation, the police has now embarked on a drive to ensure compliance with the law.

"They are not having the dealers licence and the movement permits. All these documents are given by the ministry and for us, as police, it is enforcement to ensure compliance. We have the Police Minerals Protection Unit, it is in the lead of handling these operations but before we did the operation, we had to sensitise these people." added Tushime.

Robert Mugabe, one of the affected drivers for Tororo Cement, said the issue of a license is a management issue for which drivers should not be arrested.

"They have been telling us but that permission - the dealers' licence, it was expired but it is in the process of renewing it and they were informed but they are still impounding our vehicles. For us we’re drivers, we do not know what is going on in the office. We just take the vehicle and we bring it back." Mugabe said.

Another driver who identified himself as Maluku said this was an issue between the company and government and that drivers had no control over it.

Emmanuel Lokii, the secretary production and marketing in Moroto district local government welcomed the police operation saying many miners were flouting the regulations and were often bent on exploiting the local community. URN could not get a comment from Tororo Cement.

Gerald Eneku, the inspector of mines in Karamoja noted that there were guidelines by the minerals ministry to ensure all miners in the sub-region complied with the licensing and taxation regulations.

Despite its rich minerals wealth, Karamoja remains Uganda's poorest region with more than 61 per cent of its 1.2 million people living in absolute poverty according to statistics from the Uganda Bureau of Standards, 2016.
Karamoja’s collective GDP accounts for less than 1 per cent of Uganda’s total GDP (USAID, 2017) with the proportion of people trapped in chronic poverty as high as 24 per cent, twice higher more the national average of 10 per cent according to the Uganda National Housing Survey 2017.

Squeeze ordinary good traders for more taxes while letting the thugs put mineral revenues in their own pockets.
Absurd.
Report to administrator
+2 #2 Lysol 2020-08-04 18:32
"Welcome to Moroto, come again!" That used to be the sign of welcome to Karamoja.

Now the mafias of the corrupt regime are looting the resources of Karamoja dry. The regime has miserably failed to develop that part of the country.
Report to administrator
0 #3 Akot 2020-08-04 18:56
Yusufu Bukenya, thanks.

The "thuggery" will stop when Ugandans bring an end to the misrule, looting or their land by saying;

Either way, Ugandans will be owners of their land & become political players, managers, administrators...of their God given land richess!

Has Museveni's wife been brought to account for the looting of Karamoja gold?

Why are Ugandans letting Museving tribalistically rule them, yet own tribal land richess?

Who are keeping Museveni in power, who are helping/letting him rule for life, who have joined him in looting tribal land richess?

What/Who are Ugandans waiting for to liberate them of Museveni & impose who as president/chief tribal leader?
Report to administrator
0 #4 Akot 2020-08-04 19:10
Karamoja, like many tribal lands, is so rich naturally, yet this is also land that has the most uneducated, most poor!

But then again, look at Acholi killed, destroyed, unwanted by Museveni, confined in UN refugee camps in the country, yet Acholi look up to Museveni to give Amuruland to China so that food is grown & sent to feed Chinese back home!

Not 1 Ugandan from a tribal land knows what a"country, nation" mean nor what leadership is, yet all are glued to tribal belonging, poor on their land full of gold, copper, waters that hold electricity power stations, agricultural land, oil...!

34 years & Museveni is assured of continuity, but Ugandans ensure the divisive tribalistic system that disempowers them, holds firm, thus no chance to UNITY to show Museveni way out!

No tribe has leadership to set them FREE of migrant Museveni & all tribes ensure he rules in peace!
Report to administrator
0 #5 Alibe Jamal 2020-08-05 11:25
It's unfortunate that Karamoja has since remained in absolute poverty, Gadaffi turned Benghazi from a desert to a rich land in few years, yet Karamoja is actually better than the desert Benghazi then.

The government really needs to be balanced in its planning.
Report to administrator
0 #6 Alibe Jamal 2020-08-05 11:29
It's unfortunate that Karamoja has since remained in absolute poverty.

Gadaffi turned Benghazi from a desert to a rich land in few years, yet Karamoja is actually better than the desert Benghazi. Government really needs to be balanced in its planning.
Report to administrator
0 #7 Habasa Edward 2020-08-05 22:50
No wonder!!!!!
Remember Trucks were allowed to go on......

During lockdown. Truck drivers increased Covid cases
in Ug. So one can easily see the logic behind trucks and their drivers.....

Actually more Gold must have been smuggled out before.......
Such people you never regret of Covid!
Report to administrator