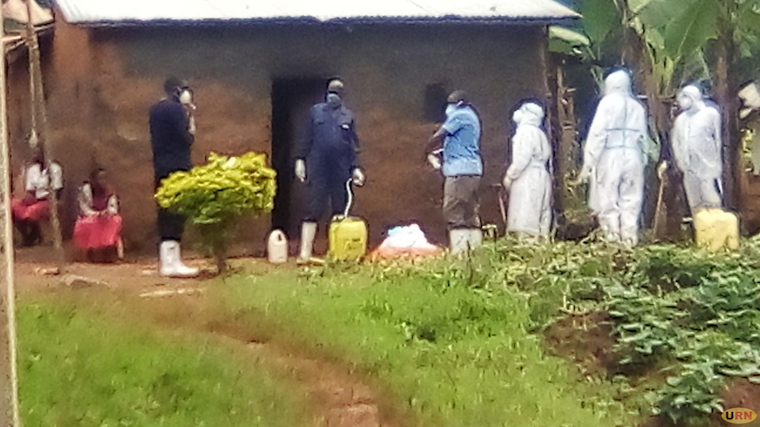 Namisindwa resident district commissioner, Kigai Mweso Wamoto has dismissed as baseless claims that the body of Uganda's first COVID-19 victim was exhumed and eaten by dogs.

Eunice Chimatala, who succumbed to COVID-19 at Joy Hospice centre in Mbale last week was buried hurriedly by the safe and dignified burial team under tight security in Sisongofwa village in Namabya sub-county.

But on Tuesday, Namisindwa Woman MP Grace Watuwa told parliament that the body of late Chimatala was badly buried and that the entire area was stinking.

Watuwa said that as a result, the grave had been ransacked by dogs sniffing out some of the deceased's body parts. Similarly, Richard Ssituma, the Gombolola Internal Security Officer (GISO) of Namabya sub-county said that residents had started abandoning the village due to the stench that was coming out of the grave.

But RDC Wamoto dismissed the claims, although he hastens to add that the grave had developed a crack as a result of bad soils coupled with heavy rains. He said that the health teams from Mbale regional referral hospital have since rectified the problem.

"The soils are weak here, the body was buried by the team which was sent by the ministry of Health through the Mbale director and they came and they observed the burial standard procedures. That is what we witnessed. It was just a crack because our soils are weak. It rained the other day, it was heavy raining. So it was a crack, and as we speak now the team came from Mbale, the DHO team from Namisindwa and the crack which was there they properly sealed it. So the grave is now okay. The dogs have not eaten anybody down as it was alleged." said Wamoto.

Meanwhile, the search for the contacts of the late Chimatala is still on including the bodaboda rider who took her to the health clinic where she died from. Wamoto says that the COVID-19  task force has alerted the public about the danger he poses to the community and intensified the search for him. Over 90 people have since been quarantined at Magale secondary school in Namisindwa district and the search for more contacts is still on.

All we know is comedy when shall we be serious? Even those we should respect are just comedic...
Report to administrator
0 #2 sn 2020-07-30 15:22
Quoting Nuwagaba Derick:

The cash accruing is huge, and some amongst us know pretty well how to chew any loads of cash from anywhere,for any reason
Report to administrator
0 #3 sn 2020-07-30 15:37
Finally there is a name to this lady. The name sounds Kenyan. It is over a week since she was kept at a village health centre for 5 days or more.

Was she a paramedic, who did not know about COVID19 symptoms herself?

Who treated her for those 5 days?
When condition worsened why was she not taken to Mbale referral hospital?

Joy Hospice centre should be gor the terminally I'll.
Who judged her to be terminally ill?

For a paramedic, why was she transported on a boda-boda?
Is Namisindwa so ill prepared, no ambulance?

Where have COVID19 funds including RDC 53m been placed?
Is this shame or are there culprits?
Report to administrator
0 #4 Lysol 2020-07-30 19:06
Dogs can transmit COVID-19 too. Pet owners should not let their pets lick or kiss them.

Some countries have abandoned their citizens to die abroad because of fear of infecting others.
Report to administrator
0 #5 Mbeho Achuc 2020-08-02 03:16
Quoting Nuwagaba Derick:

If these deaths are due to intentional/ criminal negligence to justify more cash, those embezzlers asof Covid 19 pandemic money will tangle with the ghosts of the poor victims who are fatalities!

Only fools think Covid 19 is not going to catch them or their children if it is mismanaged!!!
Report to administrator