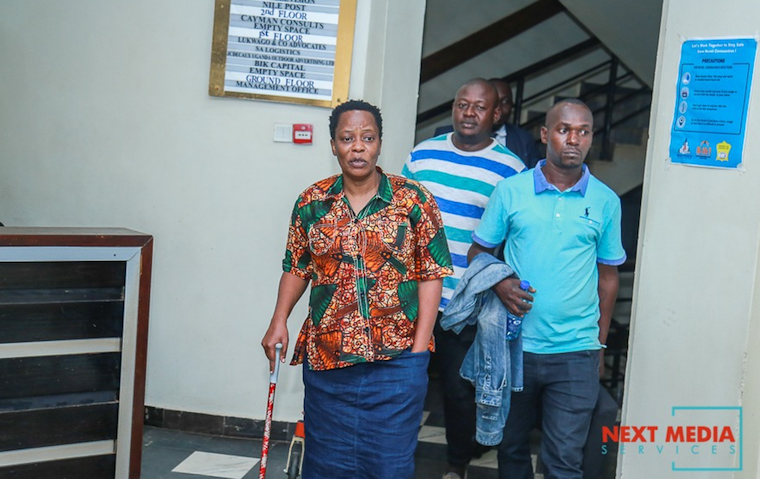 Kira Municipality MP Ibrahim Ssemujju Nganda and his Mukono Municipality counterpart Betty Nambooze were forced to spend a night in the NBS TV studios for fear of being arrested.
Police yesterday surrounded Media Plaza which hosts NBS TV after police reportedly surrounded to get the seasoned politicians arrested for flouting curfew guidelines.
Ssemujju, Nambooze together with Fred Nyanzi, the People Power coordinator in charge of the informal sector, presidential aspirant Charles Rwomushana and the Kabula County MP James Kakooza appeared on NBS TV's Barometer talk show where they debated current affairs in the country.
As the guests departed the show after around midnight, they found heavy police deployment waiting outside the premises. Luke Oweyesigyire, the deputy spokesperson of Kampala Metropolitan Police says their officers were stationed at the junction of Kayunga Road to intercept any drivers and pedestrians who might have used any of the four roads that intersect at the point they were positioned.
He says they were not targeting anyone in particular but focusing on everybody found in breach of the 9 pm-5.30 am curfew decreed by President Yoweri Museveni recently to combat the spread of coronavirus in the country.
Ssemujju says the opposition commentators believed that the deployment was aimed at arresting them after probably having said something on the show moderated by Zambaali Blasio Mukasa that didn’t amuse the state.
"So they barricaded both ends and the upper part of the road. Honourable Kakooza drove away first because him is guarded by UPDF. Rwomushana also drove there briefly and he later drove away. I think either Nyanzi, Nambooze or myself were the target. We had to sleep on the floor, me and my wife and we stayed there until the morning…Even Kakooza they asked him why he’s moving around at that time but he told them he’s being guarded by the UPDF and he has a 24-hour pass to move." said Ssemujju.
In the operation, four people were arrested including Guster Opondo, James Mubiru, Charles Rwomushana and Ali Abdallah. For Ssemujju and Nambooze, they rushed back to the premises of NBS where they spent the night. Ssemujju adds that in the morning at around 6 am, the police withdrew from area hence allowing them to go back to their homes.

+2 #1 Lysol 2020-07-29 18:59
It is the usual desperate attempts by the regime to bully, intimidate and silent the voices of the opposition. By using the same old excuses and tactics.

History dictates that those who are oppressed will always be emboldened and will persevere. Eventually they will overcome and prevail. Never give up.
Quote | Report to administrator
0 #2 Wainaichi 2020-07-29 22:08
These muyaye never give up. And look who is here,one of the Nyanzis!!!

The police's job is to persecute the opposition, especially Semuju and Namboze in this case. They were the main fish to catch.k
Quote | Report to administrator
Refresh comments list
RSS feed for comments to this post
Add comment