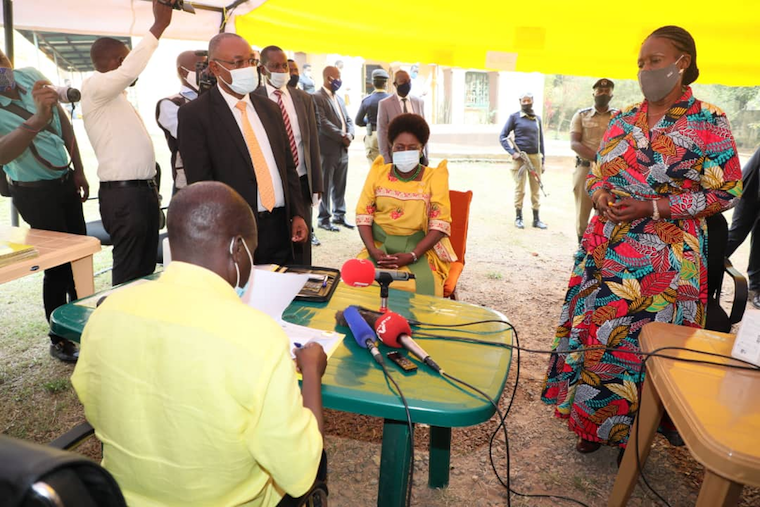 The ruling National Resistance Movement (NRM) party has no manifesto for its members to plunder and rob the country's resources with continued impunity, speaker of parliament Rebecca Kadaga.

Kadaga says because she's fond of talking about corruption within government, the corrupt are now out to fight her politically. She made the remarks at the NRM party headquarters on Kyadondo Road shortly after her nomination to contest for the NRM 2nd national vice-chairperson (female) of the NRM central executive committee (CEC).

Kadaga was quoted today by Daily Monitor saying that some corrupt people in NRM are baying for her blood, accusing her of being too old and should give way to the youth. She wondered why the same yardstick is not being used on President Yoweri Kaguta Museveni who is 75-years-old, but her who is just 60 years.

Kadaga was nominated for the position by the minister for Local Government also Igara East MP Raphael Magyezi and seconded by Amelia Kyambadde, the minister of Trade, Industry and Cooperative.

"Am not here to name names, I said yesterday and outrightly I speak against it [corruption] and there are people who don’t like it when I talk about corruption. I said that as NRM members we don’t have a manifesto to be corrupt. So the corrupt people are doing it on their own not because of the party." said Kadaga.

Kadaga who is contesting against Bukono County MP also the minister of state for Lands Persis Namuganza said, she is confident that the NRM members who trust her leadership will again vote for her.

“I want to assure NRM members across the country that I have been formally nominated; I want to tell them that I’m ready to serve you and I’m looking forward to your support as usual,” said Kadaga.

But Kadaga wouldn’t take any questions on why she has a penchant for contesting for only female positions. She has been a Woman MP for close to 30 years now.

Her competitor Namuganza said she was surprised that Kadaga had picked nomination forms. She said in 2015 elections, people stood down for her on the understanding that she wasn’t going to seek another term. Namuganza went to a great length to explain that the decision to challenge Kadaga has nothing to do with their Busoga rivalries.

Kadaga and Namuganza no longer see eye-to-eye after the former went to the constituency of the latter and allegedly installed Gabula Nadiope as the Kyabazinga of Busoga without her knowledge. Namuganza said she was confident that the NRM delegates will overwhelmingly vote for her.

To eliminate corruption, foreign aid that has kept the wretched black Africans surviving, should be given to African countries accompanied by a monitoring specialist from the country giving the aid.

It is becoming apparent that the unprecedented corruption in Africa won't end as blacks sink deeper into poverty because of Corrupt thieves.

Africans MUST ensure they have real leders & good governance first, if they want to benefit from foreign aid!

Museveni's governmet has benefited hugely from foreign aid, yet look at how Ug.population that doubbled since 1986 is so so in need!

Ugandans MUST become actors & not oppressed abused slaves without a say in their country!
Report to administrator
0 #12 Akot 2020-07-28 13:32
Quoting Juwait kali:

Officially Uganda has been unveiled as third ranking in the world's poorest country, and yet kadaga has been one of the architecture of the sole candidature in M7.

Endorsing musanvu means continuation of corruption. I don't expect more from the likes of you!

Yet, only bringing down the tribalsitic system will give chance to UNITY to ensure Museveni doesn't use police, army, those in posts to bolster his position & rule for 40++++years!

Next fake presidential/parliamentary elections will be the fresh air Museveni needs to legitimize his position & Ugandans must know he's the only candidate/winner!
Report to administrator
0 #13 Akot 2020-07-28 13:42
Lakwena, thanks.

Ugandans should by now know/understand that Museveni introduced 'presidential' election' to ensure his lifetime rule, while the tribalistic system ensures Ugandans are divided & powerless!

Before, Uganda had parliamentary election that brought to presidency the candidate who has majority mps, right?

Would Museveni still be on if it was through parliamentary election?

Would every tribe be slaves of Museveni without the tribalistic systrem he so cleaverly put in place?

As long as the tribalistic system stands, Ugandans will never have common National Leadership, but will have Museveni as common enemy who holds every tribe by the balls, owns land riches/tax money & those in posts will do their best to serve him!
Report to administrator
0 #14 Akot 2020-07-28 13:55
Quoting Concerned Ugandan:

Kadaga is arguably one of the most wasteful and lavish public officials in Uganda today! her lavish and extravagant lifestyle is on full display for all to see.

It is no secret that travel overseas has been her number one activity on her schedule of duties!

It is only the State House budget that can rival the one that goes into the office of the Speaker! Fighting corruption my foot! She is just looking for a way to continue to live large at taxpayers' expense!

Why will Ugandans go for next fake parliamentary election to keep open the useless House that serves electorate no purpose?

Why will Ugandans yet legalize, officialize, constitutionalize Museveni/nrm & useless parliament?

Museveni can go on with or without fake elections, so why have mps/keep open useless parliament to legalize the demon?
Report to administrator
+4 #15 MuwangaTheUgandan 2020-07-28 16:10
Quoting Mbeho Achuc:

To eliminate corruption, foreign aid that has kept the wretched black Africans surviving, should be given to African countries accompanied by a monitoring specialist from the country giving the aid or even an international bank.

First I would like to state it clearly that Africans are not a wretched people. That is simply offensive.

Secondly, specialists were sent and reports shared that clearly indicated massive corruption and embezzlement of funds during the Global Fund saga. Unfortunately, the same donors still send money through various organisations. So, this has not worked.

That said, I believe all solutions to our problems lie with us not with the "donors". They have their own agendas. Question is "what is ours?" and how do we handle it?
Report to administrator
12