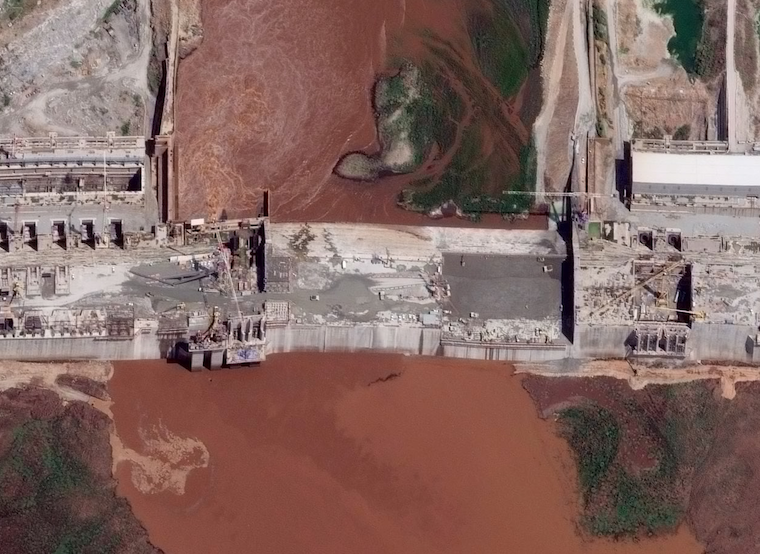 After Ethiopia acknowledged last week it has begun to fill the reservoir at its massive dam on the Blue Nile River, observers worry that neighbouring countries may feel they are running out of options to respond to a long-planned energy project that could endanger their access to fresh water.

Mirette Mabrouk, a senior fellow and director of the Middle East Institute’s Egypt Studies Program, told VOA that news about the Grand Ethiopian Renaissance Dam (GERD) being filled could ratchet up tensions between Egypt, Sudan and Ethiopia.

She believes military aggression is “option Z” in a long list of strategic moves, but remains possible.

“Nobody wants that kind of conflict. But I do think that if Egypt and Sudan have their backs up against the wall, it may be a final option,” Mabrouk said.

“At least possibly for Egypt, with the understanding that Egypt understands very, very well that any military option is really not going to be in anyone’s favour.”

In mid-July, reports emerged that Ethiopia had begun filling the 70 billion cubic meter dam, which lies along the Blue Nile tributary of the Nile River. The claims were backed by satellite images, which appeared to show the dam filling. Ethiopia had previously attributed the water to seasonal overflow.

“There is no other option. Ethiopia has its own natural rights. Ethiopia doesn’t ask for water from Egypt. It is Ethiopia’s own water resource, and, [within] its sovereignty," Seleshi said. "Therefore ... [finding] a peaceful solution is for all parties to recognize developmental goals and find a medium where there is effectual development.

"But it is clear that the path forward is not sustainable if one party gets zero and the other full benefits,” he added.

Internally, Prime Minister Abiy appears to have gained support from some opposition parties.

“We believe that it is a good thing that a certain amount of water has already started filling, and, especially when we look at the issue from the Egyptians’ perspective, their stance appears to be that they wouldn’t want a drop of water to fill," Kejela Merdasa, public relations head of the Oromo Liberation Front, told VOA’s Amharic service.

"And so, if you look at it from this perspective, it is a good sign that it is being filled. But even now, there is more work left to be done.”

“The Nile dam is being built not with the intention of harming others, but so that Ethiopians can be self-reliant,” said Mulugeta Abebe, the deputy president of the All-Ethiopia Union Party.

“It is great that the dam has reached this level of initial filling despite the environment where there are many internal and external armed groups, and our organization is happy to learn about the development.”

Outside Ethiopia’s borders, the news has angered Sudanese and Egyptian negotiators who believe the 2015 Declaration of Principles signed by the three nations forbids unilateral filling.

Sudan has recorded a drop of 90 million cubic meters per day at its al-Deim station on the Blue Nile since Ethiopia began filling the dam. That could spell trouble for the nation’s access to fresh water.

Sudan is 50 per cent desert and Egypt is 96 per cent desert, Mabrouk said, and both rely heavily on the Nile for fresh water. Egypt, for example, has about 560 cubic meters of water available per person, far less than the 1,000 cubic meters needed to be above the UN’s water poverty threshold.

“The amount of water that Egypt gets from the Nile basin annually to date is more or less 55 billion cubic meters. Egypt uses between 80 to 90 billion cubic meters every year. And that difference has got to be made up by clever water use. And it’s mostly reuse of water,” Mabrouk said. “Egypt is very, very conscious of its water use and it’s been working on [it] a long time. It has cut down on water-intensive crops like cotton.”

A quick resolution to the GERD conflict appears unlikely. Ethiopia says it will complete the dam between the year 2022 to 2023, but filling it might continue for a year or two after that, Seleshi told VOA Amharic.

It will happen over the Nile River. Ethiopia supplies over 80% of the water which flows downwards to Egypt. Some million of years ago, the Nile used to flow backwards from Egypt. Ironic.
Report to administrator
+4 #2 Miki 2020-07-28 04:26
The Observer is covering this conflict for the first time but in a shallow scatter-shot story that is short on details and context for its readers.

The story is about a conflict between Egypt and Sudan on the one hand and Ethiopia on the other regarding a mega hydro-electric project the latter is currently building on the Blue Nile which is one of the two major tributaries that make River Nile .

The blue Nile which is responsible for over 85% of the entire River Nile water volume flows out of Lake Tana in the Ethiopian Highlands.

The contentious dam, otherwise known as the Grand Ethiopian Rennaissance Dam (GERD) has a design capacity to hold water almost equivalent to the entire annual flow of the Blue Nile, and is only 12km from Ethiopia's border with Sudan.

The location of the dam enabled the Ethiopians to tie into their dam all the tributaries that feed the Blue Nile. But it also potentially gives Ethiopia the ability to control how much water flows down stream.
Report to administrator
+3 #3 Miki 2020-07-28 04:56
Ethiopia says it is building the dam to be able to provide electricity for 65% of its 110million who have no access to electricity.

And it also aims to become a major hydro electricity exporter to the region, Ethiopia initially wanted to fill the mega dam in 2 to 3 years.

Down stream, Egypt which is a desert country of almost 100million people, for most part relies on the River Nile for over 90% of her fresh water needs a bulk of which it taps and stores in its Aswan High Dam, while Sudan another desert country of almost 40 million people (though not as severely affected as Egypt) relies on River Nile for almost 50% of its fresh water needs .

Both countries, more especially Egypt which see Ethiopia as an emerging geo-political rival in the horn of Africa, suspect and fear that Ethiopia is trying to establish hegemony over the Nile waters putting them at the latter's mercy. They also want Ethiopia agree to fill the GERD in a longer period, and a say on how to operate it.
Report to administrator
+3 #4 Miki 2020-07-28 05:17
Over many years Egypt has been treating the entire Nile River and its basin as its own basing on what Egyptian refer to as historical rights, and also from colonial era agreements between Britain and Egypt.

In the colonial era, Britain which had major economical interests in the Suez Canal, allocated the lion's share of River Nile waters. Britain also gave Egypt veto powers over any future project on the Nile River. None of the people colonized by Britain were consulted.

The first Anglo-Egyptian treaty was in 1929. Britain committed its colonies of Sudan, Uganda, Kenya, and Tanzania to literally surrender their natural water rights in River Nile and all water bodies associated to it, to Egypt.

Ethiopia which was never colonized but constantly lived under the fear of colonialism as many African societies then, had earlier been forced by Britain on behalf Britain's Sudan colony in 1902 to sign a treaty undertaking not to use water or do any projects in the Blue Nile basin!
Report to administrator
+3 #5 Miki 2020-07-28 05:34
It is important to know that Ethiopia then under imperial rule and later as a republic never entered into a direct Nile River treaty with Egypt. It even gets better.

In 1959, Egypt and the then newly independent Sudan signed a treaty where the two countries allocated themselves the entire water volume of both the Blue Nile and the White Nile and also being careful to allocate some water to provide for evaporation!

Nothing was allocated to Ethiopia, Uganda, Kenya, Tanzania, Rwanda, Burundi and the Congo from where all the water in the River Nile originates.

And in Egypt's wisdom all these countries have to get permission to undertake any project that is not for drinking purposes. And Egypt has been clinging to those unjust agreements and working to ensure that all the victim countries uphold them even under the threat of military force by Cairo! The other countries reject those treaties and assert their natural rights over Nile waters in their boundaries.
Report to administrator
+1 #6 Akot 2020-07-28 14:17
Miki, thanks.

While the fight for Nile water gets more inhuman, all forgot that it's climate change that will be more problematic & the fight should be to preserve climate, if we are to ensure natural flow of Nile River!

But, it takes good governance & humans understanding they are not the creator of nature, but beneficiaries, so MUST ensure good use with respect of natural resources!

Before Museveni came to power, Ugandans respected natural spots; Mabira Forest, Amuruland, Karamoja goldland...but today, all we do is help Museveni destroy our natural God given land & lost all humanity!

What will the situation be in 15++years with ever increasing African poor population?

Are Ugandans aware they were 16 million in 1986, but today they are 34 million, with Museveni for 34 years?
Report to administrator