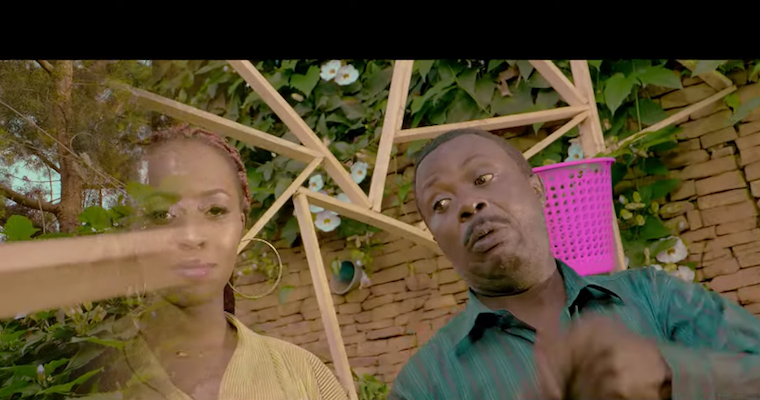 A screen grab from the contentious song, Nantaba

CID recorded Nantaba's complaint on GEF 442/2020 on Thursday before police went ahead to arrest the musician from his home in Maganjo in Wakiso district.
Kampala Metropolitan Police spokesperson Patrick Onyango confirmed that Kiwewa has been arrested and is currently being interrogated at CID.

"We have arrested Gerald Kiwewa because we recorded a complaint from Hon Idah Nantaba saying the lyrics in the song directly attack and defame her," said Onyango.

The song video which also features Dina Rukoti was created and released about three months ago by Runo Concepts, Kiwewa sings that Nantaba should leave Zaake because she is the reason why he is always beaten to a pulp. According to the song's blurb, the song talks about Nantaba, a beautiful girl who is loved by both young and old men, rich and poor because of her physical appearance.
"Nantaba leave our child Zaake because they beat him saying let canes be lit," Kiwewa's Luganda lyrics flow.

In previous interviews, Kiwewa dismissed suggestions that the insinuates a perceived relationship between the two legislators, Nantaba and Francis Zaake - the cause for the persistent brutality and police beatings. Kiwewa said in Zaake, he was referring to another local musician Chris Evan Kaweesa's earlier song in which he dares fellow suitors to bring on their game and win over the girl's heart.
Onyango added that the MP insists that Kiwewa's song does not only attack and defame her, but it also spreads hatred.

"It is as if this musician intends to make people hate me. I can't tolerate that kind of attack," a detective quoted Nantaba's statement.

Nantaba was the junior ICT minister till early this year when she was dropped and replaced with MP Peter Ogwang. Last year Nantaba made headlines on media platforms after a biker, Ronald Ssebulime was arrested, handcuffed and then executed by police on claims that he wanted to assassinate the minister.

It was later established that Ssebulime was actually carrying a bag containing food items which he was taking to his children on visitation day at St Andrew Kaggwa on Kayunga Road.

Kiwewa is not the first Ugandan musician arrested over composing songs that have rubbed prominent persons the wrong way. Nearly two years ago, David Mugema, a musician, and his music producer, Jonah Muwanguzi, were accused of composing a song that disturbed President Yoweri Kaguta Museveni peace.

Titled; Wumula Mzee loosely translated as take a rest old man, the song saw Mugema and Muwanguzi charged with two counts of offensive communication under Section 25 and 21 of the Computer Misuse Act of 2011.
Kiwewa's arrest comes at a time when Ugandan artists are protesting government's new regulatory proposals that require all artists including musicians, poets, comedians to submit their works and scripts for review and approval by government agencies before they can be released into the public domain.

Hon Nantaba smells a rat and accuses the Police of playing the same deadly games they did when the man she suspected of trying to harm her was quickly executed .

Hon. Nantaba warns Kiweewa not to risk his life by involving himself in stunts with killers.within the "security" gangs.

QUESTION : who issued the ORDER to arrest Kiweewa and WHY?

Good afternoon Lakwena !
Believe me , there has been a lot of smoke talk around the deal between this very sexy lady and the Obove.

Now that someone has chosen to take place the matter on the table, careless whispers may have to be shouted out

Personally , I am not opposed to idea of Super Glue trying to get a life . Maybe , that would make him take his knee off our throats.

Enkulu tenywa ? ( even an old cow gets thirsty )

Gutten morgin Wooden, I think you have better Baganda sayings than Mr. M7 and his shallow Banyankole sayings.
Report to administrator
0 #24 Wooden K. 2020-07-27 11:02
Kirya , this lady has never killed anybody.

It was the Police that shot the guy and have never explained why.

This is the same Police that now allages that this lady filed a complaint against Kiweewa. The lady demands to know where and when she filed that case.

This lady was not charged for the murder of a young man who was minding his business. She has no shame
she should be serving time.

This lady was not charged for the murder of a young man who was minding his business. She has no shame

she should be serving time.

Naye Mr. Kirya, put a little effort in being intelligent, she never carried a gun, she never pulled a trigger, a handcuffed man was shot by a police officer, she has always questioned who gave the police officer the order to shoot! And there is Kirya!
Report to administrator
123