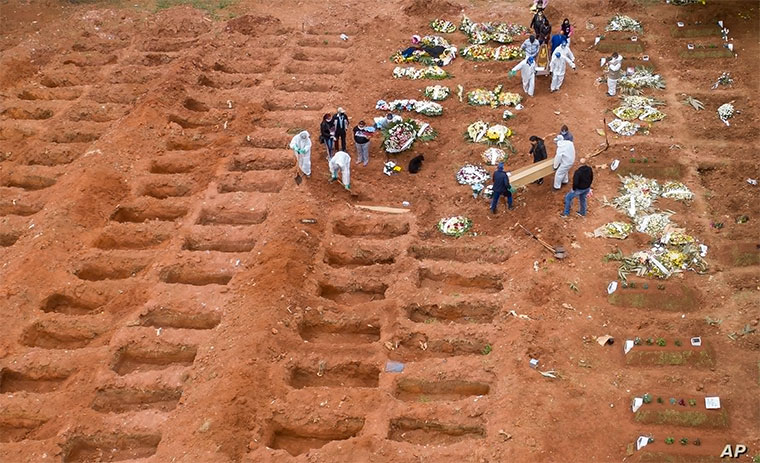 A thousand deaths a day. Since late May, three months after Brazil's first reported case of the coronavirus, it has recorded more than 1,000 daily deaths on average in a gruesome plateau that has yet to tilt downward.

On Thursday evening, the federal health ministry reported that the country had passed 2 million confirmed cases of virus infections and 76,000 deaths. Even as cases wane somewhat in the biggest and hardest-hit Brazilian cities, the virus is peaking in new locations across the largest country in Latin America.

Experts blame denial of the virus' deadly potential by President Jair Bolsonaro and lack of national coordination combined with scattershot responses by city and state governments, with some reopening earlier than health experts recommended.

An interim health minister untrained in the field is presiding over pandemic response. Bolsonaro himself is sick with COVID-19 after repeatedly flouting social distance recommendations and undermining local leaders' restrictions on activity. Brazil's roughly 7,000 COVID-19 deaths in each of the last seven weeks is equal to several airplanes packed with Brazilians crashing every day, former health minister Luiz Henrique Mandetta told The Associated Press.

Brazil's 2 million-plus cases is second only to the United States, and experts believe the number to be an undercount due to widespread lack of testing. A model created by professors from several Brazilian academic institutions, based on the number of confirmed deaths, estimates Brazil has had 10 million infections.

"The virus would have been difficult to stop anyway. But this milestone of 2 million cases, which is very underestimated, shows this could have been different," said Dr. Adriano Massuda, a health care administration specialist and professor at the Getulio Vargas Foundation, a Sao Paulo university. "There's no national strategy for testing, no measures from the top, ... too little effort to improve basic care so we find serious cases before they become too serious, no tracking."

The virus has begun reaching cities and states previously spared, offsetting declines elsewhere. The number of deaths has been ebbing in states including Rio de Janeiro and Amazonas, where people were buried in mass graves in the capital, Manaus. In the last two weeks, 10 of Brazil's 26 states and its Federal District saw increases, with two southern states' average daily death tolls doubling.

Bolsonaro has consistently downplayed COVID-19's severity, saying strict social distancing measures that sacrifice jobs and income will ultimately be more harmful than the virus itself, and calling on supporters to encourage their local leaders to lift restrictions on activity. Many mayors and governors have struggled to hold the line.

In Ribeirao Preto, a city in Sao Paulo state, protesting shopkeepers on Wednesday demanded they be allowed to reopen. They surrounded the mayor's car as he left City Hall, punching his windows and cursing at him.

Campinas, a city of 1.2 million people closer to the state's capital, adopted quarantine measures early, but succumbed to political pressure and reopened commerce on June 8, said Pedro de Siqueira, a Campinas city councilman. The city centre swarmed with shoppers like an overturned anthill, he said in an interview.

Two weeks later, the number of COVID-19 deaths had roughly tripled to 253, as did the number of confirmed cases, to 6,324. Intensive-care beds refilled with patients, prompting the mayor to reinstate restrictions on commerce on June 22, but allowing offices and churches to continue operating.

"Campinas reopened prematurely and erroneously, supported by the state government," Siqueira, who is also a public health physician, said at the time. "This reopening was so catastrophic that Campinas had to step back but did so only partially."

Since then, Campinas' number of cases and deaths has doubled once more. On Wednesday, the city extended restrictions until July 30. Daniel Soranz, a researcher at state-run biology institute Fiocruz's national health school, said Brazil's center-west that includes the agricultural heartland will be the last region slammed by the virus. And, looking at deaths from severe respiratory insufficiency, it appears Brazil as a whole has begun turning the corner, he said.

"By the end of August, we should be at a much better place than today," Soranz said.

In Sao Paulo, Brazil's most populous state with 46 million residents, the number of deaths has stabilized at a level slightly below its peak. At one of the capital's cemeteries on Wednesday, Michelle Caverni buried her 88-year-old aunt, who died of COVID-19 and also suffered from pulmonary emphysema. The same day a friend of Caverni's buried her 57-year-old mother. She also died of COVID-19.

"Until it knocks at your door, people are indifferent," said Caverni, 40, a restaurant cook. "Yesterday there were 1,300 deaths from COVID-19. Is that supposed to be few? People are saying that's just the media. I hear that every day at work."

Most people show only moderate symptoms from COVID-19 and recover. Some, including the elderly or those with longstanding health problems, are more susceptible to severe illness, including pneumonia, or death.

Modelling by the University of Washington's Institute for Health Metrics and Evaluation projects that Brazil's death toll will reach almost 200,000 by November, nearly closing the gap with that of the U.S. The forecast has a wide margin of error.

"We will see how this patient known as Brazil will behave until the end of this epidemic," said Mandetta, who Bolsonaro fired as health minister in April for backing state governors' quarantine measures.

We can ask the clueless Aceng the question who is just appeasing her boss. She is doing a terrible job, that is why she is fighting hard to be a mere MP before she is fired before the truth comes out.
Report to administrator
0 #2 Akot 2020-07-18 21:04
Lysol, thanks.

Does Museveni do what mps tell him?

Parliament is open with mps elected by naive electorate who legalise Museveni's 1 man rule in the country he owns & in which he controls every institution!

How can a normal people in a normal country be tribalistically divided & ruled/terrorised by a migrant they gave shelter to?

Either it's Ugandans or Museveni who will finally bring down the tribalsitic system & Reform the Republic to make Uganda part of today world!

So, who will it be?
Report to administrator