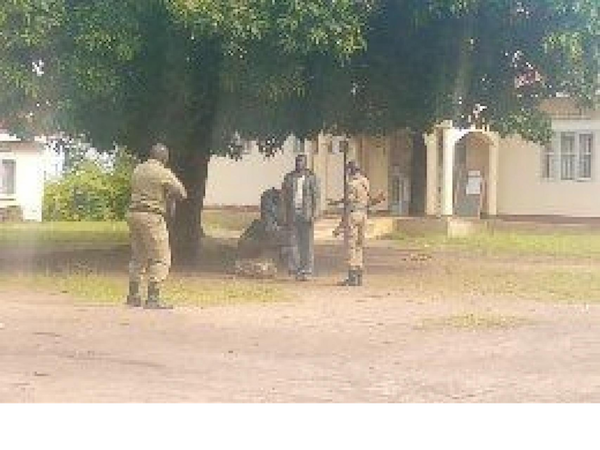 A 30-year-old man in Arua district is nursing an injured foot after being shot by a police officer for allegedly failing to wear a face mask.

The gunshot victim is Bazil Asindua, a resident of Ediofe village in Arua city. Asindua met his fate at Manibe sub-county headquarters on Tuesday morning as he and his brother only identified as Mawa rode on a numberless motorcycle to attend the funeral of their late father in Terego.

He explains that when they approached a police checkpoint at Manibe, a police officer identified as Odong who is attached to the National Forestry Authority (NFA) ordered them to stop and surrender their motorcycle. He says a scuffle broke out prompting Odong to slap him on the face and accusing him of failing to wear a face mask.

“After slapping me twice, I also had to slap him and we were later taken to sit under a near-by a mango tree at the sub county, but I realized the kilo of meat and some other food items we were carrying home had fallen by the roadside,” Asindua told officers from the Professional Standards Unit (PSU) on Wednesday.

He explained that he tried to get up and pick the items from the roadside but Odong cocked his gun and shot a bullet in the air. He reportedly turned his gun and aimed at him and shot his right toe as his brother Mawa looked on.

“Many people who were at the sub-county scampered for their lives on hearing the gunshot but for us we told Odong and his two colleagues to kill us if they wished as I started bleeding,” Asindua narrated.

According to Asindua, the officer accused them of not wearing face masks yet they had them in their pockets, riding a numberless motorcycle and carrying a passenger in contravention of the Covid-19 standard operating procedures.

The two were later picked up by a police patrol and driven to Arua central police station where they were locked up. Asindua was later taken to Arua police health centre III where his toe was dressed before he was asked to return home. Mawa remained in the cells until Wednesday when he was released unconditionally prompting them to report the matter to the PSU in Arua.

Evans Vuata, the commandant of PSU in West Nile, says the police officer used excessive force and urged Asindua and his brother to report the matter to the Criminal Investigations Directorate.

“If they had a case to answer, then they should have been brought to the CPS not resorting to shooting the way he did,” said Vuata. He urged the victims to report the case warning that if they refuse, PSU will pick it up.

Josephine Angucia, the West Nile Region police spokesperson declined to comment on the matter, saying she wasn’t aware of the incident.

+1 #1 WADADA rogers 2020-07-15 21:13
Can you imagine, where does a police officer get the anger to shoot at an unarmed civilian because of a mere mask that even the minister of Health Aceng finds hard to wear, are the covid 19 measures still necessary
Report to administrator
0 #2 Juwait kali 2020-07-15 22:15
Grow up Ugandan media this is not news in this makamo Republic anyone can be short for any reason.

You are all athletic just like your president otherwise by now everyone would have put down enkumbi and sort this nightmare out.

You are even ashaming yourselves more by printing these things. Yesterday during the arcade faracus how many people died.
Report to administrator
0 #3 Larry james 2020-07-16 08:07
I've said this before and I'll say it again. As long as we have these P2 chaps dressed in police uniforms and carrying guns, we will never have peace.

This is done intentionally because we have educated young men and women with clear backgrounds and psychological profiles who can logically and responsibly police Ugandans.

I'm so scared of those thugs that I comply with any of their ridiculous demands because they are so ignorant and trigger happy, and corrupt to the core.
Report to administrator
0 #4 Juwait kali 2020-07-16 10:06
Wanted to mean pathetic this automatic speller also!!!! Yeah everyone needs to wake up. Afterwards Museveni will offer ten million to the Family .

The coffincer will not be charged because they will need him to stop pipo pawa in the selection process soon and murder would have become a norm. The good news going by previous experiences, those are indications of the beginning of the end!!!!!
Report to administrator
0 #5 Wainaichi 2020-07-17 03:40
This is very unfortunate incident and such things should ne avoided.

Instead,police officers should call patrol and arrest citizens who are breaking rules or maybe like in India wipe them to feel the pain and follow precautuonsmShootongs should be only reserved to killers and criminals refusing citizens arrests.
Report to administrator
+1 #6 Lakwena 2020-07-17 14:03
Who has bewitched our security personnel, so that they are so unreasonable? Besides, why are our policemen/women and LDU armed with the deadlyAK47, which is a war weapon, meant for deadly foreign enemies.

In other words, in the eyes of Mr. M7/NRM Ugandans are the enemies. That is why he is always talking about "fighting".

Even among savages, barbarians and at a family level; which society in the world encourages and glorify "fighting" in the name of solving disagreement or disputes?

I am always dumbfounded to see people clap and cheer, when Mr. M7, intoxicated with violence; talks and "glorifies fighting".

Yet it is his violence and fighting, which since 1981, has taken Uganda 35 years backward, with many lives, properties and opportunities lost.
Report to administrator