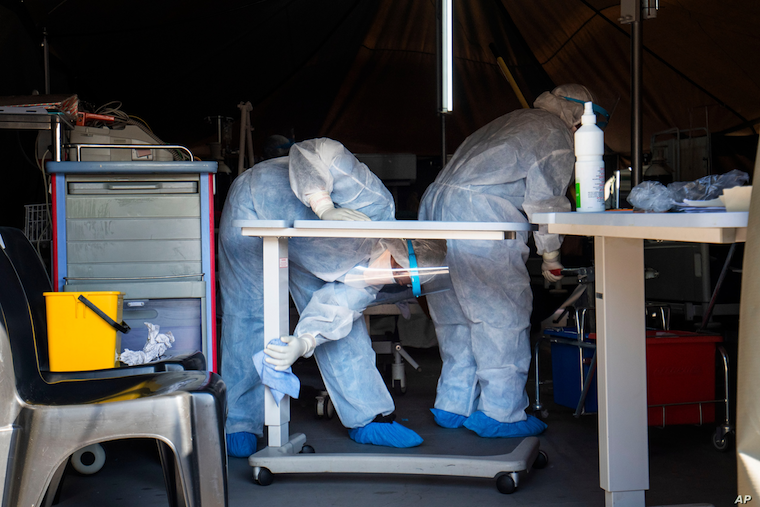 Medical staff cleans a tent where Covid-19 patients are being treated at the Tshwane District Hospital in Pretoria, South Africa, July 10

The coronavirus storm has arrived in South Africa, but in the overflowing COVID-19 wards the sound is less of a roar than a rasp.

Oxygen is already low in hospitals at the new epicentre of the country's outbreak, Gauteng province, home to the power centers of Johannesburg and the capital, Pretoria.

Some of the hospital's patients spilled into heated tents in the parking lot. They lay under thick blankets in the middle of winter in the Southern Hemisphere, with a cold front arriving this weekend and temperatures expected to dip below freezing.

South Africa overnight posted another record daily high of confirmed cases, 13,674, as Africa's most developed country is a new global hot spot with 238,339 cases overall. More than a third are in Gauteng.

"The storm that we have consistently warned South Africans about is now arriving," Mkhize said this week.

A nurse at Chris Hani Baragwanath hospital — the third largest hospital in the world with more than 3,000 beds — painted a bleak picture, saying new patients with the virus are now being admitted into ordinary wards as the COVID-19 ones are full.

"Our hospital is overloaded already. There has been an influx of patients over the last two weeks," the nurse said, speaking to The Associated Press on condition of anonymity because they were not authorized to give interviews.

More and more colleagues at the hospital are testing positive daily for the virus, the nurse said, "even people who are not working in COVID wards."

Already more than 8,000 health workers across Africa have been infected — half of them in South Africa. Any struggles in how the country manages the pandemic will be amplified in other nations across Africa, which has the world's lowest levels of health funding and health staffing.

The continent as of Monday had 599,355 confirmed cases, but shortages in testing materials means the real number is unknown. South Africa's surge in cases comes as the country loosens what had been one of the world's strictest lockdowns, with even alcohol sales banned until June 1. Now restaurants have sit-down service and religious gatherings have resumed. The economy was hurting and needed reopening, authorities said.

But nervous officials in Gauteng province have called for stricter lockdown measures to return. On Friday, Gauteng Premier David Makhura announced he had tested positive with mild symptoms.

"We must double our efforts," he said in a statement, urging people to wear face masks, wash their hands and distance themselves.

Warning signs keep flashing. Hospital beds in all provinces could be full within the month, the Health minister said this week. On Friday he said a team is looking at 2,000 additional beds for field hospitals in Gauteng. In addition to the shortage of beds, many hospitals are grappling with limited oxygen supplies to treat patients with the respiratory disease.

Guy Richards, director of clinical care at Charlotte Maxeke hospital in Johannesburg, told the AP they are extremely worried about potential shortages.

"Even a big hospital like ours has difficulty supplying sufficient amounts of oxygenation for our patients. The same thing is happening at Helen Joseph (Hospital), and this is a major problem," he said.

"Currently we are stretched but we are still coping in terms of our wards, our sisters and doctors are working extremely hard," she said.