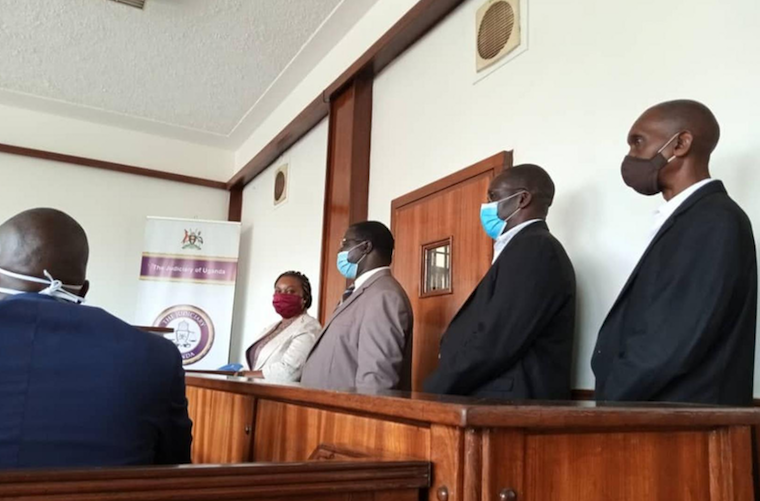 Accused OPM officials in the dock

Four senior officials from the Office of the Prime Minister (OPM) have been slapped with 24 fresh charges relating to flouting procurement process while purchasing COVID-19 relief items.

The officials who include the permanent secretary Christine Guwatudde Kintu, accountant Joel Wanjala, assistant commissioner for procurement Fred Lutimba and commissioner for disaster management Martin Owor will now face 12 counts related to abuse of office and 12 others on false accounting.

According to the new charge sheet presented by the resident state attorney Janat Kitimbo, the accused persons did acts prejudicial to their employer when they prepared and issued false entries in award letters to several companies to supply COVID-19 relief items such as maize and milk worth more than Shs 32 billion in total disregard of the procurement procedures.

The other companies include Mehta Group C/o SCOUL was given Shs 900 million, Operation Wealth Creation which was paid Shs 450 million, Pearl Dairy Farmers Limited with a bill of Shs 525 million, Nmacks Investments Limited Shs 225 million and Global Centre Limited which was given Shs 240 million.

It is also alleged that the accused persons used their offices to defraud government after making false entries of the said award letters to the companies to supply relief items purporting that the monies had been allocated by the OPM contracts committee which was false. The trial will now be transferred to the Anti-Corruption court which has the jurisdiction to try the new offences that have been slapped against the group.

The four had initially been charged with one count of colluding to commit a fraudulent act during the procurement of COVID-19 relief items by inflating prices of commodities such as beans and maize which caused a loss of Shs 4 billion to the government.

The accused persons were represented by a lawyers McDusman Kabega, Andrew Mumpenjje, Evans Ochieng and Medard Lubega Sseggona. The legal team asked the state to disclose the evidence they intend to use against their clients as they head to the Anti-Corruption court.  The state noted that all this will be done when proceedings at the Anti-Corruption court commence.

And much of the money lost from this government criminal service will be recovered and put to good use.
Report to administrator
-2 #2 kabayekka 2020-07-10 05:13
It is unfortunate that such NRM diehard that have served government for sometime cannot be forgiven!

For their misdeed during the lockdown, no Ugandan citizen has died of starvation! And no Citizen has died anyway of this international pendamic!
Report to administrator
0 #3 Amooti Mugi 2020-07-10 08:48
One of the remaining options to stop theft in Uganda is to close offices that steal government funds!!!

That office in the OPM should also be closed!!!
Report to administrator
+1 #4 Amooti Mugi 2020-07-10 08:48
One of the remaining options to stop theft in Uganda is to close offices that steal government funds!!!

Everything start and stop with the head of an agency/ministry. That office is know for corruption and it should be closed.

Why is the PM not questioned for all the loses in tax payers money. Nobody has respect for that office. It’s as rotten as any government agency in Uganda. M7 has to go and the entire system has to be turned upside down and start all over.
Report to administrator
0 #8 kirya 2020-07-11 01:01
The mothers of corruption live in the state house.
They steal 24/7,rape Uganda everyday.kill Ugandans
daily Grabb baganda lands 365 days.

Government properties hotels belong to the family of thieves!!
Report to administrator