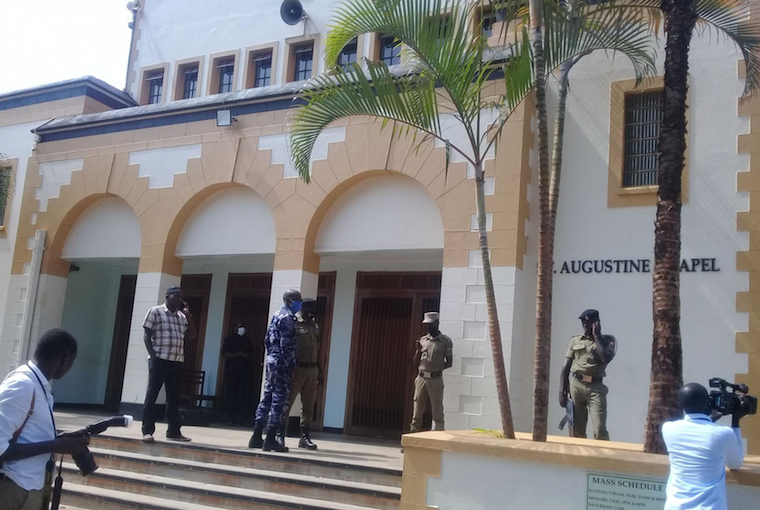 Police today blocked St Augustine Chapel from releasing to journalists the Closed Circuit Television (CCTV) footage showing events that led to the death of Makerere University student Emmanuel Tegu.
Police claimed Tegu, a third-year Veterinary student was attacked by a mob that mistook him for a thief at around 11 pm on June 27. He succumbed to injuries sustained from the attack on July 4 from Mulago hospital.
Tegu's family claimed that in his dying declaration, he said that he was beaten by Local Defense Unit personnel and police officers who accused him of flouting curfew guidelines. Amidst the contradictory accounts surrounding Tegu's death, Fr Joseph Ddungu, the church's chaplain promised to release the CCTV footage in the presence of both police and media personnel.

Yesterday, Fr Ddungu informed journalists that the CCTV clips were to be officially released to police and journalists on Wednesday at around 11 am. However, upon accessing the chapel's CCTV control room, the police detectives and police ICT team blocked access to journalists and Makerere guild members.

Fr Ddungu who had left everything to the church administrator, a one James, came from his office and insisted that the CCTV be released to the media.

“I am being called every day and by many people wanting to see this footage. It must be given to the media. I am tired of being called and I want this to be concluded. The journalists are here, allow them to see,” Fr Ddungu told police.

But the Makerere University officer in charge of criminal investigations, Priscilla Amuko said the footage could not be accessed by journalists because investigations are still ongoing.

“If you have any other queries to make you can go through the PRO [police spokesperson]. We have not taken over anything. Let’s work together to see the deceased gets justice,” ASP Amuko said.

The police team was reinforced by Wandegeya Division police commander Samuel Odongo the officer in charge of operations Mubarak Ssemakula and the Makerere University OC alongside other policemen who surrounded St Augustine chapel until the CCTV footage was extracted.

Church and Makerere University members who had earlier on accessed the footage but preferred anonymity, said Tegu is seen being chased by police at around 9 pm.

Police reportedly fired thrice as the student ran for dear life. But he returned about 25 minutes later and tried to charge at one of the police officers. Police later chased him towards Centenary bank near Lumumba hall from where he was found beaten to a pulp. Makerere University guild president, Julius Kateregga, who was allowed to watch the CCTV footage corroborated the narrations.

"The footage we saw is the footage at the church not at the Students Centre…it shows when policemen charged towards him first. Then when he comes back and he disperses them, then he runs after one. We don’t know what happened and they tried to chase him away, he does not fight them but he charges towards them and then he ran. That is the second time. The first time, they shoot and run after him and he runs away. Then the security personnel gather and they start briefing themselves. Then he comes back, he comes back the second time and disperses them and he runs after one and they run in different directions and then we don’t know what happened after there. He was half-naked," said Kateregga.

Tegu was beaten near the Students’ Centre that also houses Centenary bank in Makerere Zone V near Lumumba hall of residence. Police have so far arrested 13 people including three security guards and 10 youths who are children to Makerere University administrative and support staff.

According to police sources, the arrests follows a meeting between the deputy inspector general of police Maj Gen Stephen Muzeyi Sabiiti and Kampala Metropolitan police commanders on Sunday.

Sabiiti reportedly stormed out of the meeting after the commanders said there were no arrests and yet there was reportedly a dying declaration of the deceased on his alleged attackers. It is alleged that the suspects have counter accused each other of beating the deceased student.

+3 #1 Kalibbala 2020-07-08 22:26
Police reportedly fired thrice as the student ran for dear life.It is alleged that the suspects have counter accused each other of beating the deceased student...# Here we are Again!

First and Foremost Police using Brutal Force with Assault Rifles Shooting at Civilians without Arms!! Secondly This was a Student!!thirdly like I said Before Confiscating Evidence in order to come back with a Distorted Report! Who is Fooling WHO!!??

Sabiiti Muzeyi is a Military Personnel with NO Police Training from Scotland Yard or anywhere!! His Orders are to Combat Ugandans as If they were Enemies in Their Own Country!!..The World is Watching and All of you will land in den Hague for Crimes against Humanity!!
Report to administrator
+5 #2 Lakwena 2020-07-09 08:35
In other words, what the armed forces of this country are doing to Ugandans, is what they have been physically and psychologically trained to do. E.g., how many times have we heard Mr. M7 say that for the NRA/UPDF, they aim at the head and the heart (to kill).

They are trained to look at every Ugandans as a potential enemy, hence they are armed with AK47 to "fight" Ugandans.
Report to administrator
+2 #3 WADADA rogers 2020-07-09 09:41
I dont think the police knew that the chapel had cameras, now that they have told lies to the public which can be disproved by the footage of the CCTV camera, the battles lines are now drawn.

Lies will lead Uganda to an abyss!!! Even the mavericks like Mr.Tamale Mirundi are genius enough to record whatever they say on TV or Radio, that is why people fear to take them to Courts of law!!! Ha ha ha hi hi !!!
Report to administrator
+1 #7 Nalongo Mutiima 2020-07-10 09:51
Subject NRM security officers to psychological pressures suffered by the soldiers of the past regime, and you'll see no difference in extrajudicial killings and thuggery.
Report to administrator
+3 #8 Jonathan Luyirika 2020-07-11 13:14
In a military state, when there is no war, the citizens become target.
Report to administrator