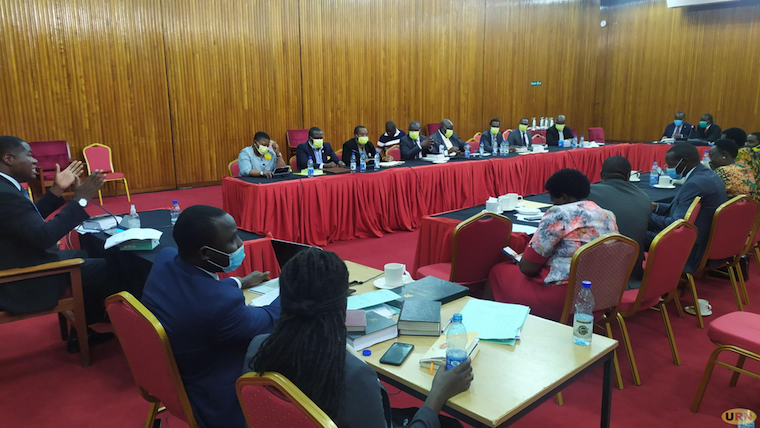 The ruling National Resistance Movement (NRM) party is opposed to calls demanding that the government declares a state of emergency because which would result in the postponement of the 2021 general polls.
A state of emergency is where government suspends normal constitutional procedures to regain control. It is usually declared during national disasters, war and civil unrest, a pandemic or epidemic among other risks. Ever since the Electoral Commission released a revised roadmap, banning the mass rallies and campaigns, opposition groups and other stakeholders have cried foul, saying the proposed digital campaigns are going to disenfranchise a lot of people who have no access to electricity, radio, social media or TV.

Several political actors in the country have called for the postponement of next year's elections due to the coronavirus pandemic. But NRM party officials led by the secretary-general Justine Kasule Lumumba and NRM’s legal director, Oscar Kihika while appearing before the Legal and Parliamentary Affairs committee, said President Yoweri Museveni isn’t satisfied that the current COVID-19 circumstances require a declaration of state of emergency provided for under Article 110 of the Constitution.
“Clearly as things stand, the president is not satisfied. This Article expressly provides that the president must be satisfied before he declares a state of emergency. Now, obviously the declaration of a state of emergency is not a simple matter because most of the arguments that we have heard is that there should be a state of emergency and what follows thereafter is a postponement of the election. That decision is a very serious one because you are pulling the power of people of selecting their leaders away from the people. I believe that His Excellency doesn’t take this matter very lightly,” Kihika said.

According to Kihika the president is convinced that elections with restrictions can be held under satisfied current circumstances and hence no need to declare a state of emergency. The lawyer further explained that declaration of a state of emergency brings in serious consequences relating to civil liberties and can lead to abuse of power.

"One, you remove the power of the people to elect their leaders. That is a serious constitutional abrogation. If you’re going to invoke Article 110, you have to be very very careful and that decision has to be considered extremely seriously because that is the effect. Number two, those of you who are agitating for a state of emergency, from a legal standpoint, it has a serious consequential effect. It takes away civil liberties which can be easily be abused. And so when the president chooses not to take this step, you must understand where he’s coming from. It is because he respects the power of the people." Kihika added.
Kihika also noted that in case of a state of emergency, Uganda has an existing law on emergencies passed in 1968 - The Emergency Power Act.

“It gives a lot of powers to the minister of Internal Affairs to pass all manner of statutory instruments which would actually give him powers to arrest people without due process under the excuse of trying the maintain emergencies. Actually, when you read that Act now, there might be certain aspects that are probably inconsistent with our current Constitution,” he said.

Kihika, however, said that up until the declaration is made, the powers that would be concentrated in a couple of people are frightening especially if one is not sure that the person is governing the country in the best interest of the population.

However, Masaka Municipality MP Mathias Mpuuga downplayed Kihika's comparisons of the current coronavirus situation to the 1966 crisis that led to the declaration of a state of emergency.

"With due respect to senior counsel, the 66 crisis that endangered the state of emergency and the situation we’re discussing now, to they are really different. We’re discussing two constitutional orders and am constrained to agree with him [Kihika] in relation to these two situations…We all know the circumstances that endangered the 66 declaration and where we’re now in the pandemic situation." Mpuuga said.

Kiryowa Kiwanuka another NRM lawyer also weighed, saying that the mode of election activities always keep changing, arguing that changes in an electoral process does not mean that the election is abnormal.

"Honourable members and chair, we can also state that even if the regulations were not passed, this election must take place and NRM must participate in it and we shall use the legal means available to convince the party members on how to participate in an election without breaching the COVID regulation. We’re within the framework, that one we can give you comfort on," Kiwanuka said.

His statement followed a submission by Lumumba who said that there should be an election come 2021 since it is government’s responsibility to make sure that Ugandans exercise their right to vote as per the Constitution.

"No election or election, as NRM there should be an election and the election should be done within the time unless something out of the ordinary happens. Why? On the 12th of May 2016, HE Yoweri Kaguta Museveni, the president of the Republic of Uganda and the national chairman of NRM took an oath to protect Ugandans. The two cardinal responsibilities he took was to protect Ugandans, protect their lives and properties but also to make sure to uphold the very constitution and make sure we hold elections and hold elections in time." Lumumba said.

I also wonder if you can remove dictatorship without kakumbi!!!!
Report to administrator
0 #3 Kalibbala 2020-07-08 22:35
Notorious Robbers! Are you on Mars!?? look around You..Elections are Held around the World! Poland has held Elections plus other Countries!!

Do not Deceive yourself that The World is Not Monitoring Uganda!! Just make that Blunder of Refusing Us our Constitutional Right and Mutapata cha Mtema Kuni!!
Report to administrator
0 #4 WADADA rogers 2020-07-09 09:45
Let them play all the games that they can just because they are in power but the way things are looking, there will be a thousand successful cases in court against government, you cant infringe on peoples rights enshrined under the constitution by relying on mere Public Health Act under which the President declared all those unfair restrictions that have outlived their usefulness but still continue to be implemented.
Report to administrator
0 #5 kabayekka 2020-07-09 13:52
After the postponement of the national election of 1965/66, Uganda has since had sham elections that have failed to upgrade African democracy.

It is high time the country of Buganda acquire a better political direction.
Report to administrator
0 #6 Juwait kali 2020-07-09 22:45
Kabakayekka that is precisely what for decades we have been demanding from our katikiros over the years.

Mayiga was supposed to demand for Federal dead or alive but wapi. Anyway next year we going to fight for it!!!!!
Report to administrator
0 #7 Wainaichi 2020-07-10 15:07
No need to panic.As long as pandemics is under control and as long as Uganda is registering relatively small numbers of infections and almost no casualties, it is prudent to keep a watchful eye and carry on business as usual.

Uganda and Ugandans are very very but very very lucky that there are minimal losses.

Lives have no price and ecmcerybody has to observe rules and protect themselves and others.
Report to administrator
0 #8 kirya 2020-07-11 20:28
Quoting kabayekka:

After the postponement of the national election of 1965/66, Uganda has since had sham elections that have failed to upgrade African democracy.

It is high time the country of Buganda acquire a better political direction.

No need to panic.As long as pandemics is under control and as long as Uganda is registering relatively small numbers of infections and almost no casualties, it is prudent to keep a watchful eye and carry on business as usual.

Uganda and Ugandans are very very but very very lucky that there are minimal losses.

Lives have no price and ecmcerybody has to observe rules and protect themselves and others.

Fake number to scare and use for political gain.
Report to administrator
0 #10 kirya 2020-07-11 20:38
We need to get back to the drawing board and figure out how to run Uganda or split it up.

Uganda has not worked as we have had one dictator after another who have killed innocent Ugandans. m7 is getting loans in our name and distributing it among his family members!

Our land is being grabbed by the same family. Our children are exported to Middle East as slaves. Ugandan live in all corners of the world because of the refuges we gave shelter!!

No enough is enough we have to fight back by all means. Yes we have the money to liberate our country.
Report to administrator