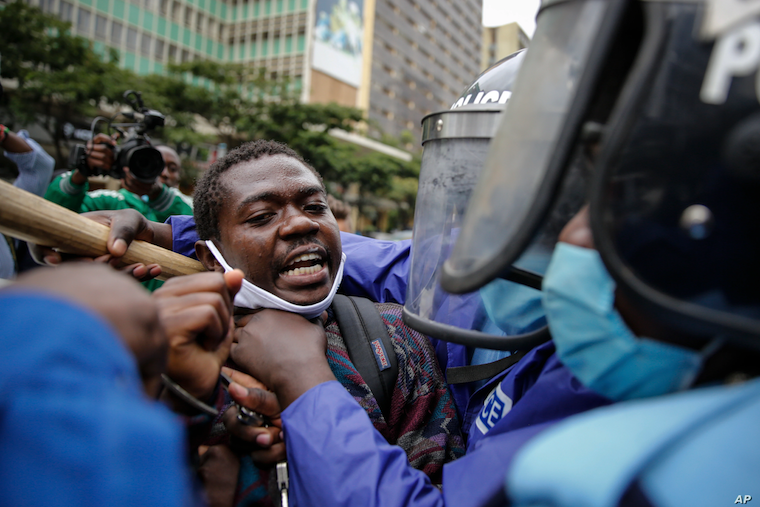 Kenyan policemen grab a protester by the throat as they detain him at a demonstration in downtown Nairobi, Kenya

Hundreds of demonstrators, mostly from poor parts of Nairobi, marched through the streets Tuesday of the Kenyan capital to protest against violent policing and the lack of basic services in their areas. Police used tear gas and arrests to block the protesters as they tried to reach the president’s office to deliver a petition.

Saba Saba is a Swahili phrase that means “Seven Seven” in English, denoting the date, the 7th of July. It’s remembered in Kenya as the day in 1990 when opposition parties attempted to hold a series of nationwide rallies to protest the then-one party state and call for political reforms. Hundreds were arrested and dozens killed as security forces squashed the protests.

On July 7, 2020 – the 30th anniversary of those protests – hundreds of people marched through the streets of Nairobi to demonstrate against what they describe as social and economic injustices.

Most are residents of Mathare, Kiamaiko and Dandora, some of the poorest parts of Nairobi. Many protesters said the government is depriving them of basic needs, including the right to life.

32-year-old George Muhia, a community organizer from Kiamaiko, a poor neighbourhood in Nairobi, was among those hoping to deliver a petition to the president.

Since January to date, Missing Voices, a coalition of at least a dozen rights groups in Kenya, has documented 100 cases of police killings. Some of these victims, Muhia says, were people known to him.

Muhia says the economic situation in Kenya does not allow poor people to access basic things like a good education and job opportunities.

Aileen Wanjiku is the research campaigner at Missing Voices.

"So, we are also seeing that – this one is being disrespected in different ways, we have violent policing, we have a lot of people dying at the hands of police officers.”

Police used tear gas to break up the march Tuesday, and they arrested more than 50 people. The protesters were unable to reach the president’s office to deliver their petition.