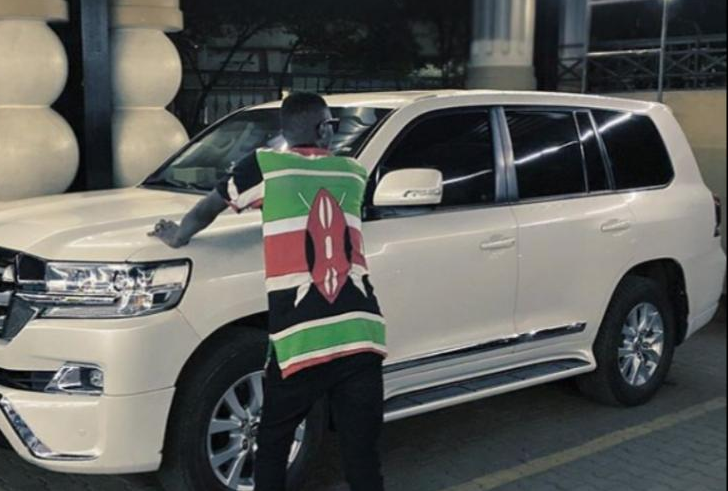 Jose Chameleone poses next to his vehicle

The Anti-Corruption court has issued criminal summons to popular music star Joseph Mayanja aka Dr Jose  Chameleon to appear and face charges related to his failure to pay import duty tax worth more than Shs 137 million.

Anti-Corruption court chief magistrate, Pamela Lamunu Ocaya issued the criminal summons on Tuesday requiring Mayanja to appear before her on July 30 to answer the offences against him.
Mayanja faces two accounts of being in possession of unaccustomed goods and failure to produce documents when required to in line with the East African Community Customs Management Act of 2004.

According to the charge sheet signed by Simon Peter Ogwang, a customs officer with Uganda Revenue Authority, Mayanja was found in possession of a South Sudanese vehicle, registration number SSD 499B Toyota Land Cruiser V8 Model along Wakaliga-Bulange Mengo on April 12, 2020.

Ogwang says they tasked Mayanja to avail the URA team with documentation regarding the legal status of the vehicle in Uganda, which he promised to bring in vain. URA notes that the artist has never paid the import tax duty for the vehicle valued at Shs 137 million.

Trouble's for Mayanja started on Easter Sunday as he was going to perform live at BBS Terefayina, a local TV station. URA intercepted him in Wakaliga to provide the documentation for the vehicle in vain.

A video went viral on social media showing the singer asking the tax officials to go and pick the documents from his home. Mayanja couldn't be reached for a comment on the charges against him.

-2 #1 WADADA rogers 2020-07-08 10:46
I guess somebody wants to kill Chameleon's political life using this case. why take him to court if he is ready to provide the documents and to pay the taxes
Report to administrator