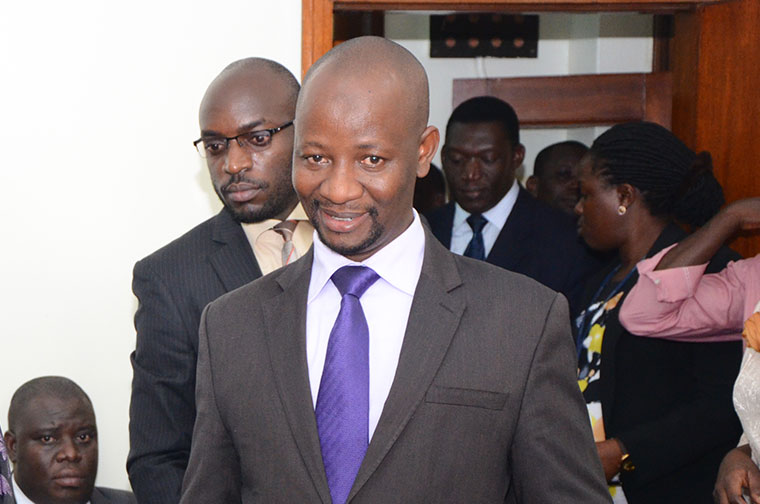 Uganda's biggest opposition political party, the Forum for Democratic Change (FDC) has announced an extension the term of office for its leaders until after the February 2021 general elections.
FDC spokesperson, Ibrahim Ssemujju Nganda says the coronavirus pandemic and its restrictive guidelines and circumstances in the country can’t allow them to conduct the elections as required by their party constitution.
The party was due to conduct internal elections this July. However, since March this year when Uganda registered its first coronavirus case, nearly all political activities including rallies like all other mass meetings and gatherings were banned by the government as a preventive measure against the spread of the highly infectious COVID-19 that continues to ravage the entire globe.
Uganda's cases now stand at 953 with 892 recoveries while the active cases are 206 including foreigners and refugees according to the ministry of Health. Whereas all political parties bar the ruling National Resistance Movement in the country have called for the postponement of next year's general elections until when there is a conducive environment to conduct inclusive free and fair elections, government has ruled that out, instead advising politicians to embrace digital campaigns via radio, TV and social media.
Ssemujju says FDC can only conduct its party elections when people assemble. For those who want to contest in the general elections on the FDC ticket, Ssemujju said that they already issued expression of interest forms to know how many people are interested. He said in places where there will be more than one candidate, they will conduct party primaries the same way they have been conducting them in the past.

“We have sequenced these exercises to take us through the month of July and August. FDC internal program is not affected by any other program. In some constituencies you have about 300 people who make up the electoral college, those will have to physically assemble. There is no any other way. We shall not have elections on phone or circulate papers like the NRM is saying,” says Ssemujju.

In the revised Electoral Commission roadmap, parties are prohibited to carry out open-air campaign as means to control the spread of the coronavirus (COVID-19) disease.

Ssemujju said that the party equally rejects the guidelines that were recently presented before parliament by the Justice and Constitutional Affairs minister Prof Ephraim Kamuntu, that allows the national executive committees of political parties to make decisions including selecting candidates to vie for political offices.

"Because the NRM failed to hold their own internal elections under the guidelines, they now went into cabinet and agreed that let us develop guidelines under the Political Parties and Organizations Act that will enable us issue an NRM roadmap that doesn’t contradict the NRM constitution. That is why they have provided about seven avenues through which a political party can choose leaders and flagbearers. And am told, now they want to go back to electoral colleges to reduce the number. So we’re just facilitating NRM to go through internal elections and go and steal. I don’t see how FDC will benefit from its leaders not meeting," said Ssemujju.

But NRM's senior media manager Rogers Mulindwa said the opposition will reject everything for as long as it has been suggested by the government. Currently, the Legal and Parliamentary Affairs committee is scrutinizing the guidelines including consulting stakeholders.

His both Besigye would be protesting the fake election results, semujju would race to parliament for his proceeds.

Semujju is an accomplished political business man I hope people power fills a candidate against him in his constituency. Shame on you young man considering how many people have died whilst you are playing these personal gain games!!!!!!!!!!!
Report to administrator
-1 #2 Kalibbala 2020-07-07 22:36
I wish and Hope that Ugandans have now realized that There has NEVER been anything Called Opposition in Uganda!!

NRM/A wrote a Script in the Bush of Hoodwinking and Brain washing Us!! Besigye was Chosen as the Blue-eyed Con man to keep us at Bay!!

He owns Hotel Equatorial, Ranches,Mansions around the Country,and Petrol Stations all Serving the State!

He is Part of the 50 year Rule Agenda...Remember he was involved in the Fake Choppers Scam with Salim Saleh(Rufu-Death) and Emanuel Kato..worth Millions of Dollars..NO case Answered!! Semujju Ngaanda from Bijaaba is Another Con Man !

Ask these Goons what Development they have Added to Uganda apart from earning Big and Living Posh..where Wanainci are Struggling to make ends Meet!! VOTE THEM ALL OUT!! Chemical Elections or Whatever they Call it..
Report to administrator