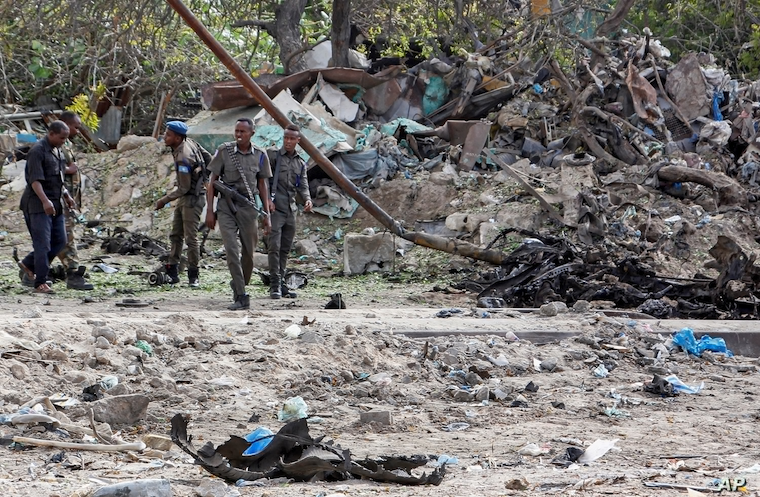 Somali soldiers attend the scene where a suicide car bomber detonated near the gates of the motor vehicle imports duty authority headquarters near the port in Mogadishu, Somalia

At least five people were killed and more than eight others wounded when a government security checkpoint was bombed in Baidoa, Somalia’s administrative capital of Southwest State, on Saturday, witnesses and security officials said.

Officials in Baidoa, about 250 kilometres west of Mogadishu, told VOA Somali that the blast apparently came from a remote-controlled landmine planted at a government tax collection point in the southern part of the town.

“Four civilians and a government solider have died in the blast and eight others were wounded,” said Baidoa District Commissioner Hassan Mo’alim Bikole. “The wounded are being treated at hospitals.”

Bikole said most of the victims were civilians. In the Somali capital, Mogadishu, a suicide bomber driving a vehicle blew himself up in front of the government revenue headquarters, injuring seven people, including security guards.

“The security forces suspected the vehicle as it sped towards the revenue headquarters building. The police officers guarding the place prevented it from reaching its target and the driver rammed the vehicle into a nearby perimeter wall before he blew himself up,” said Sidiiq Dodishe, a police spokesman.” Five police officers were injured in the blast, he added.

The Somali government has condemned both attacks, saying such incidents will not deter its efforts to stabilize the country. Government spokesman Ismael Mukhtar Omar said al-Shabab was behind both bombings.

Residents in Mogadishu said the blast was the biggest they had heard since last December. Steps taken by Somali security forces in the city, including setting up roadblocks leading to government offices and major installations, are believed to have minimized attacks targeting military bases, hotels, restaurants and other public places.

This kind of savagery against fellow human being/countrymen and women, sometimes make me think we are not all human being.

In other words, because of the diabolism they are capable of doing to other people and even themselves (suicide bombers); some people who appear to be human being, but are actually not.
Report to administrator