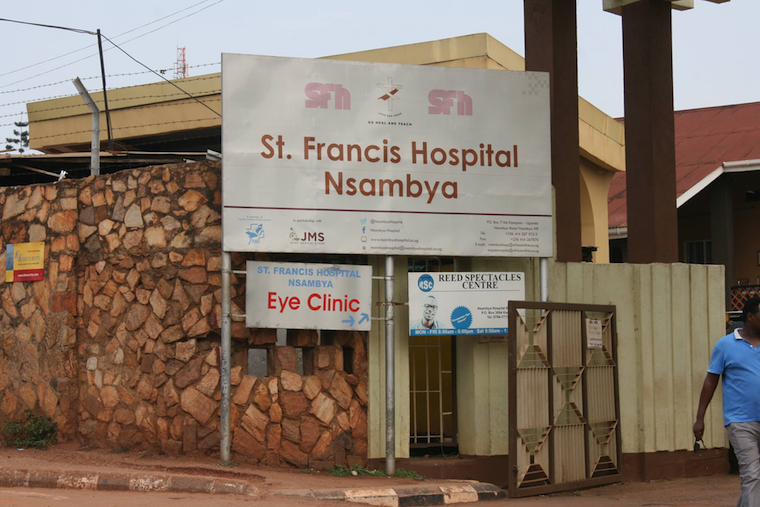 St Francis’ Hospital, Nsambya is in the spotlight again for detaining for over three months, a mother, who lost her unborn child over uncleared medical bills.

Caroline Nassaka, a mother who lost her unborn child during a surgical operation has been in detention for more than three months by after she failed to clear a medical bill of Shs 2.2 million.

Nassaka was admitted at Nsambya hospital on March 24, 2020, after developing pregnancy-related complications. During the operation, she lost her baby and after four days of treatment, her bill had accumulated to Shs 3,932,300 as of March 27, 2020, when she was due for discharge.

Nassaka was a victim of rape and had no husband or partner to look up to. Her mother sold off her livestock but only managed to pay Shs 1,750,000 of the bills, leaving an outstanding balance of Shs 2,182,300. The hospital has since detained her in Regina Ward until the entire bill, is cleared. She was also not allowed to bury the child she lost during the operation.

Her sister, identified as Pricilla Nassaka and the mother said that ‘Caroline is traumatised.’

"I confirm that Caroline Nasaka is in the hospital according to the receipts. She has been there for three months. She’d been a surgical case, she has healed it just that emotionally she’s downcast, she stigmatized for lack of better words because of how the people who come to lobby for their money treat them and the words they tell them. And then remember because she was discharged but then again she stayed in hospital after having lost a child. So that trauma is something she has not dealt with." said Priscilla.

A team of lawyers from Newmark Advocates is demanding for Nassaka's immediate release. The lawyers led by Francis Harimwomugasho argue that the hospital's actions have subjected Nassaka to mental torture especially by staying in the same place in which she lost her baby.

Harimwomugasho is concerned that the woman has been prevented against her will from leaving the hospital premises and has not been allowed to see the light of the day from the time she was admitted.

The lawyers allege that Nassaka's mother has tried to negotiate with the hospital administration to allow them to leave the hospital and search for multiple sources of finances to settle the bill, but her request and appeal was in vain.

They say that Nsambya hospital has never been a gazetted detention centre and has no right to curtail anyone’s freedom of movement. They further described the actions of the hospital as barbaric, and a clear violation of the freedom of liberty and movement.

They have now given the hospital an ultimatum of five days to release their client from what they call illegal detention, and compensate her a sum of Shs 200 million for emotional distress and mental anguish suffered over the past three months. Anything to the contrary will lead to litigation, they warned.

Nsambya hospital administrator Sister Mary Cleophas Kizito declined to comment about the specific case on account that she needed time to consult. She, however, denied the allegations that the hospital detains patients who fail to clear bills.

But the hospital has previously held a 17-year-old fishmonger who lost his arm to a crocodile in Buikwe district after he allegedly failed to pay his medical bills of Shs 4.3 million. Last year, four mothers and their newly born babies were detained by St Francis Hospital, Naggalama in Mukono district after failing to pay medical bills which ranged between Shs 200,000 and Shs 800,000.

Four years ago, a patient who found himself at International Hospital, Kampala, after a car accident was held for close to two weeks over the alleged failure to pay Shs 19.5 million out of the total bill of Shs 39 million. He has since dragged the facility to court seeking to be compensated.

0 #1 Sabiti 2020-07-06 08:09
These kinds of stories are becoming very common. I think that if you knowingly go to a private hospital for medical care; then you have to be prepared to pay the medical bills.

I also think that Nsambya hospital should have sued her for unpaid medical bills rather than detaining her for all these months.
Report to administrator
0 #2 Lakwena 2020-07-06 08:28
Public Health facilities are regularly demonized, but the staff are not so demonic like those in Nsambya and/or the Church/Missionary based Hospitals. Most of the staff are pretentious, cold, cruel and foul.

E.g. for the 3 months, what was the cost of the menace, extortion and dehumanizing Ms. Nassaka?

As it goes: the love for money is the source of all evils. The poor will always be with us; God where are you and what happened to compassion for the sick, widows and poor?

I repeat, in Uganda you fall sick/ill, go to hospital/clinic and/or die at your own risk. Eish
Report to administrator
0 #3 Lakwena 2020-07-06 08:43
Out of of Charity and compassion, many private individuals and organizations donate medical equipment medicines to these Church based Hospitals.

Named after "St. Francis", but if Nsambya Hospital staff/administration is that mean spirited and treat patients with sucb barbarism, then who in his/her right mind would like to donate to the hospital?
Report to administrator
0 #4 Kadenge 2020-07-06 13:59
It is sad what we read,but then you may find that the whole truth is not told.

As belief in God has wanned in the western world,the Catholic Church gets few donations compared to previous years.

Thus money has to be generated from within the country. With poverty levels,corruption,mis management,you will expect such!

The problem starts with the leadership i guess,look at how government prioritises it's needs.
Report to administrator
0 #5 WADADA rogers 2020-07-06 17:12
So sorry, i not so sure whether to blame the hospital or Nasaka, the story is so sad that it reminds us that the poor have no place in this country.

The Government should have dealt with such problems by improving public health facilities all over the country.
Report to administrator