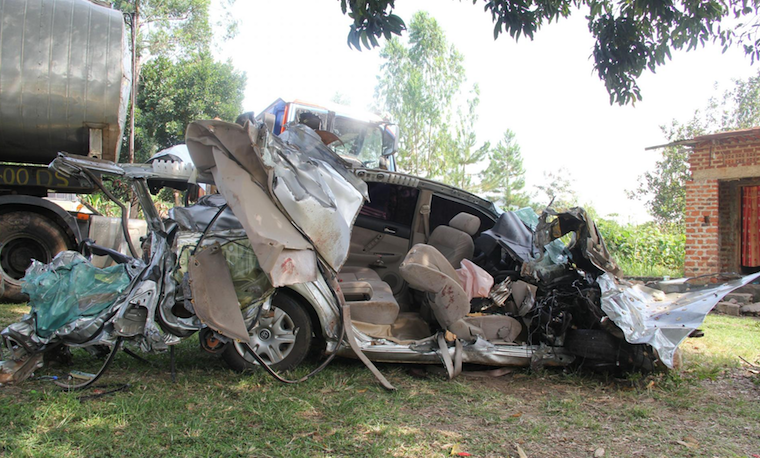 Wreckage of what was left of the Premio vehicle

Two detectives from the Criminal Investigations Directorate (CID) headquarters and a suspect have perished in a motor accident at Magaga trading centre along the Jinja-Iganga highway.

The deceased have been identified as detective assistant Emmanuel Mawa, detective sergeant Dick Magala and Philip Wadambwa who they had arrested from Manafwa district this morning.

It is alleged that the accident occurred when the Premio which was being escorted by a police patrol truck attempted to overtake the Scania truck and crashed head-on with the Kenyan truck destined for Kampala.

“Ever since the lockdown began, there has been a reduction in the number of trailers transiting goods at night. Traffic personnel are rarely deployed to enforce traffic guidelines. At around 5:30 am I noticed a police pickup and a Premio racing at a terrific speed and minutes later, we received information about the accident,” he said.

As long as Ugandans go along, the People in position will do as they wish, so will Museveni.

Power for change belongs to "the people in UNITY' &
Ugandans MUST bring down the tribalistic system, UNITE to block & force Museveni out!

Then Ugandans will have to;

Are Ugandans waiting for Museveni to die, then take to arms to ensure tribal superiority?

Museveni controls every institution/tax money in a country he has no tribal land in, those in posts serve him, while those who have nothing complain/blame/wait & wait for WHAT?!

If Museveni dies in post like Nkurunziza, Ugandans will be face to face with one another, enemies of themselves, without National Leadership!

Then, will tribal leaders become real ones & manage affairs, serve their people?
Report to administrator