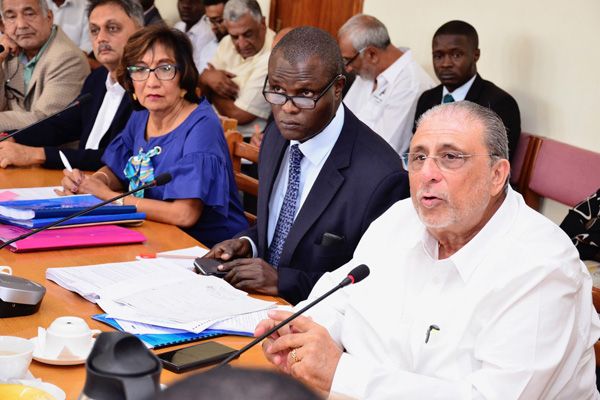 In a letter to the parliamentary inquiry into the disposal of properties of departed Asians, businessman Mohammed Allibhai has roundly refuted two claims; that he snubbed parliamentary summons and that he is on the run from International Police, Interpol.

“For your information, our client has not received any summons or come across any alleged warrant of arrest…Our client has been freely living his life and attending to his health issues contrary to the impression that he is hiding. The newspaper reporting which is attributed to COSASE tarnishes his name and damages his character,” the June 19 two-page letter written by Allibhai’s lawyers; Ambrose Tebyasa & Company Advocates, reads in part.

COSASE is the acronym for the Parliamentary Committee on Commissions, Statutory Authorities and State Enterprises, which is investigating among other things any possible fraudulent activities committed during the repossession of the properties. It is also supposed to propose measures to safeguard the assets against any fraudulent disposal and obtain any relevant information concerning the management of the assets under the trusteeship of the Custodian board.

But Allibhai wants COSASE to discontinue the investigation arguing that the parliamentary inquiry contravenes the law.

“As you may recall, on 18/3/2020, we wrote to the office of the Honorable Speaker of Parliament with a copy to you vide ours reference NO. AT/MAL/09/2020 reacting to a newspaper report that you were investigating our client in respect of some properties, which had been a subject of court proceedings…” the letter reads further.

“Another letter was written to your office on behalf of our client by M/S Akampumuza and Co. Advocates on 10/3/2020 raising serious issues as to the legitimacy of the investigation in view of the fact that the matters under investigation were a subject of court proceedings within the exclusive mandate of the courts of law of this country. It was further highlighted that the intended investigations had the effect of being contemptuous and subjudice to the various court processes and ultra vires of the POWERS of COSASE and Parliament generally.”

The lawyers insist, “The above said communications were a clarion call to the committee to discontinue the investigations as they openly contravene the law and the Constitution but our client has never received any response or position taken by parliament on his communications.”

“The allegations that our client is in hiding are not only unfortunate but extremely unfounded. A legally represented person who continuously communicates to you cannot be accused of hiding.”

The lawyers say their client cannot refuse to appear before an impartial body because he has appeared before.

“This negates the issuance of warrants against a person without serving him as per the mandatory procedures that govern parliamentary hearings under the relevant Act.”

“If you require our client to appear before the committee, he can only do so when the situation has improved and returned to normal as he is currently not within the country and you are aware of the international lockdown for most borders,” the lawyers wrote.

“We are also demanding that instead of defaming our client and depicting him as a criminal who is in hiding, in case of any documents required to be served on him, serve them either on our firm or on M/S Akampumuza & Co. Advocates who have communicated to you before,” the letter adds.

Allibhai last appeared before the MPs on September 11, 2019, in his capacity as chairman of the Association of Expropriated Properties Owners Limited and said he was managing more properties on behalf and on instructions of the original proprietors who are in Canada and Europe.

He told MPs that after returning to Uganda in 1991, he was given powers of attorney by owners three years later to help them in the repossession process because they were scattered in Canada and the United Kingdom.

He denies any foul play in the process. Parliament with the nod of approval from speaker Rebecca Kadaga cleared a House sub-committee to travel to Canada between January 12-26 to investigate allegations that some properties of Indians expelled by “H.E President Idi Amin were repossessed, yet the owners had been compensated by the governments of Uganda and India.”

The probe team chairman Ibrahim Kasozi (Makindye East MP) couldn’t be reached for an interview. All his know cellphone numbers were off.

And now his lawyers want COSASE to shelf the case.....What indigenous Ugandan has 400 land titles???

This guy is just a thief! Plain and simple....he could not even prove how he got them! He is just milking the spoils from us local Ugandans. Actually if he is exonerated we shall open up a case against him. We shall find something to pin on him! Thief!
Report to administrator