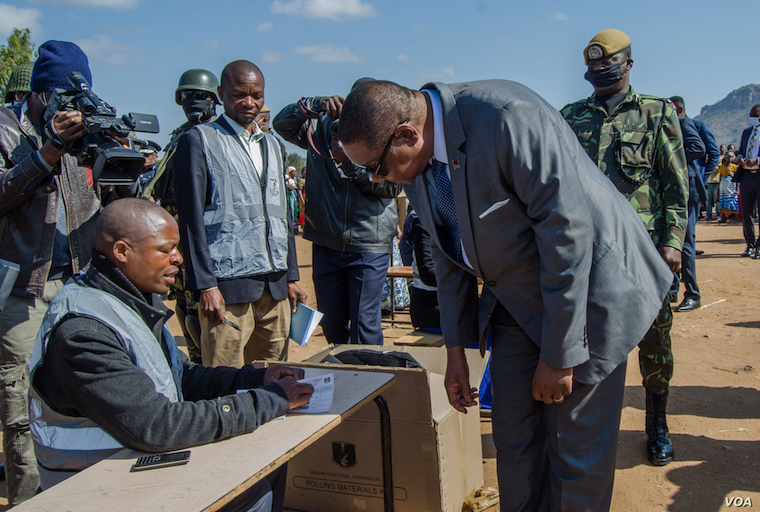 Malawi's Electoral Commission (MEC) says it expects a free and fair election this time, although a few incidents of violence were reported. Electoral officials said people started queuing as early five o’clock in the morning Tuesday, waiting for the polling centres to open at six.

“We have a good number of registered voters. Turn up was just very good, and individuals are coming in large number according to how they registered and they are voting,”  he said.

The election took place as Malawi continues to register a rise in COVID-19 cases.  As of Tuesday, the southern African country had 803 cases with eleven deaths since the first case was confirmed in April. But Mphepo said all preventive measures were observed throughout the voting process.

“We are provided with the hand sanitizer, face masks and also we are observing the distance which is required; one meter apart when they [voters] are coming towards administration clerk,” he said.

He said voters were also encouraged to use their own pens for marking the ballots. However, pictures from the polls showed otherwise with voters seen without face masks and not observing social distancing while in queue.

The MEC chairperson, Chifundo Kachale, told a press conference in Blantyre that the voting process was generally peaceful and that 99 per cent of the polling stations opened on time.

President Mutharika was among those who voted in his home village, Goliati, in Thyolo district. The president condemned acts of violence reported in some parts of the country.  In at least two locations, opposition backers beat supporters of the ruling party who they suspected of trying to rig the polls.

Mutharika said the violence would likely make some people afraid of voting.

“This is very sad that this is happening.  It’s obvious the people are afraid of the people who are engaged in these barbaric acts. I condemn it completely,” he said.

Voters who spoke with VOA said they were happy to participate in the fresh elections and that they are eagerly waiting the results. The MEC says vote counting starts soon after voting ends and the final results will be announced within eight days, as required by the law.

Museveni thinks the world is always static like him. You will learn the hard way.
Report to administrator