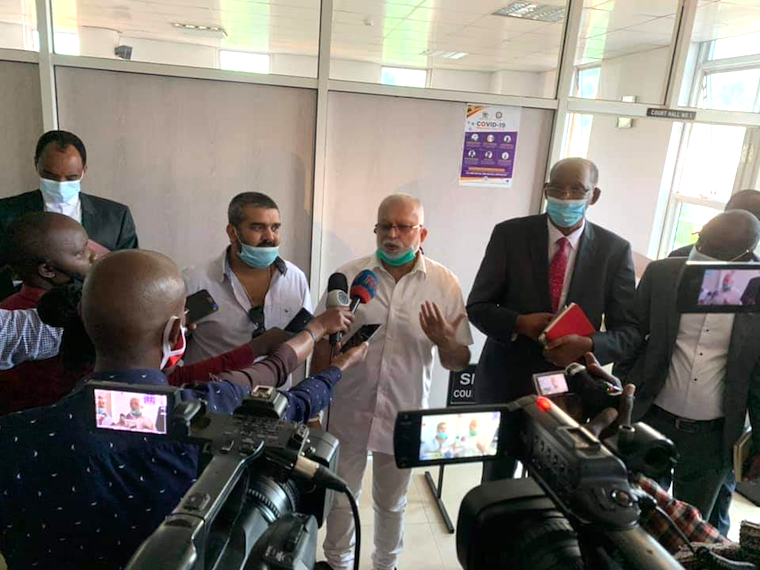 This is the second time court is throwing out the case and disputes filed by BOU against the businessman. This particular case follows an appeal by the Central Bank, in which the chairman Ruparelia Group was accused of taking Shs 397 billion out of Crane bank as a director and shareholder in alleged fraudulent transactions and 48 land title transfers.

In August last year 2019, the Commercial court sitting in Kampala dismissed the BoU and Crane bank (in receivership) suit against Sudhir and Meera Investments over lack of legal basis to sue.

Delivering the ruling on August 26, Justice David Wangutusi, ordered BoU to pay legal costs to Sudhir. Under civil suit no. 493 of 2017 that had been instituted by the Crane bank (in receivership) against the applicant, Sudhir and Meera Investments sought to dismiss the suit on the grounds that it was barred in court and did not disclose a course of action.

At the onset of this suit, Sudhir had another battle in a conflict of interest case where the lawyers of MMKAS Advocates, David Mpanga of AF Mpanga-Bowmans and Sebalu & Lule Advocates were barred from representing BoU and any party in cases involving Ruparelia Group. The conflicted lawyers formerly worked for the Ruparelia Group.

Now, in a unanimous verdict this week, three justices led by deputy chief justice Alfonse Chagamoy Owiny-Dollo, Cheborion Barishaki and Steven Musota, agreed with the decision of then Commercial court judge, David Wangutusi that once Crane bank was placed under receivership, it lost its powers to sue Sudhir.

“A person who is protected from suits under the law is also prohibited from suing. It’s, therefore, our finding that this ground should be decided in the negative." the ruling added.

In July 2017, Bank of Uganda, as receiver of Crane Bank Limited (Crane bank) and regulator of the banking sector sanctioned filing of a suit against Sudhir and Meera Investments Limited to recoup funds that were allegedly extracted from, as well as losses that were caused to Crane bank.

The suit sought to recover a total of $93.8 million and Shs 60.3 billion, together with the freehold titles to Crane bank’s branches, general damages, interest and costs.

“The facts giving rise to Crane bank’s claim are set out in detail in the papers that were filed in the High court and the defendants shall be given an opportunity to formally respond, as is their right” a statement that BOU posted on their website said.

“We have observed that there is a lot of unfounded speculation in the media regarding this Court case. We wish to assure the public that any allegations that the suit is being brought by the Bank of Uganda and/or its lawyers for purposes other than the recovery of the funds and properties due to Crane bank are false,” BoU statement added.

You certainly cant get immunity from prosecution as a result of insolvency while expect to have an open cheque to drag others to court.
Report to administrator
0 #3 kabayekka 2020-06-26 06:13
If this bank has dodgy records of incompetent what could fair judges pass as true judgement?
Report to administrator
0 #4 Klaibbala 2020-06-26 23:00
How did Sudhiri Accumulate his Wealth? By Conning Ugandans with Lottery!

Kenya chased him Away!! This made Hard-Core Criminals Of Notorious Robbers Movement to Join Hands with Him to Milk Uganda's Treasury DRY!!!

No wonder Presently they are stealing Everything they can get their fingers on !! BY the Time Ugandans Wake UP it will be too late!!

Even Your Grand Grand Children will have to Pay For This..Uganda is the Only Country on this Universe Where Killing,Robbing,Maiming and Loot are Common Practice !!God From Butare Presides over a FAILED State and his is Satisfied with the Results..
Report to administrator