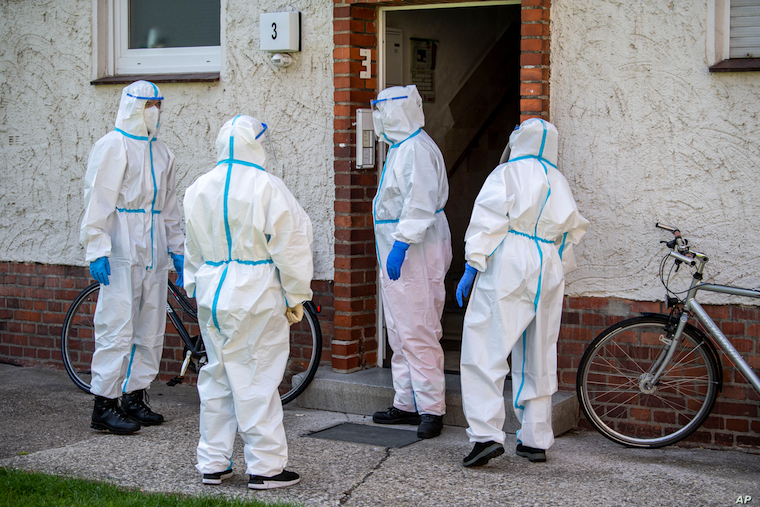 German authorities on Tuesday slapped new lockdown measures on a western region that has had a surge of coronavirus infections linked to a slaughterhouse, trying to make sure the cluster doesn't fuel a wider contamination in the community.

More than 1,550 people have tested positive for coronavirus at the Toennies slaughterhouse in Rheda-Wiedenbrueck and thousands more workers and family members have been put under a quarantine to try to halt the outbreak.

The company has blamed its workforce, which is made up of mostly immigrants from Eastern Europe, for bringing the virus in while union officials say the outbreak is due to the terrible working and living conditions employees faced under loosely regulated sub-contractors.

The governor of North Rhine-Westphalia state, Armin Laschet, said people in Guetersloh and parts of a neighbouring county for the next week will face the same kind of restrictions that existed across Germany during the early stages of the pandemic in March and April.

These include limiting the number of people who can meet in public to those from a single household or two people from separate households, Laschet said.

"We will order a lockdown for the whole of Guetersloh county," he told reporters Tuesday. "The purpose is to calm the situation, to expand testing to establish whether or not the virus has spread beyond the employees of Toennies in the population."

"We will get a better picture of the situation through intensive testing, and can then see more clearly within seven days what the situation is," Laschet said.

Cinemas, fitness studios and bars will be closed although restaurants can still cater to people from the same household. Previously, the western county had only closed schools and daycare centres, sparking anger from parents who said their children were being punished for failings at the slaughterhouse.

Prior to the Toennies outbreak, Germany had been widely praised for its handling of the pandemic. Intensive testing, tracing and hospital preparation measures tamped down the outbreak and kept Germany's death toll five times smaller than Britain's. Germany has seen 8,899 confirmed virus deaths and about 192,000 cases.

Toennies, a family-owned company, has been criticized for using subcontractors for parts of its operation. The practice, which is common in the German meat industry and which the government now wants to ban, often results in migrant workers from Eastern Europe living in cramped communal housing and transported to abattoirs in minibuses, heightening the risk of infection.

A video circulating on social media also showed workers at Toennies seated close together during break times at the plant, although the company has disputed how recent the video is. Laschet expressed his frustration Tuesday at the company's handling of the outbreak, saying authorities had to order Toennies to release the names of its employees.

"The readiness to cooperate could have been greater," he said.

Laschet said the measures will be lifted June 30 if the situation has improved, but declined to provide specific parameters for how success will be measured. He also urged other regions in Germany not to discriminate against people from Guetersloh.

The German news agency dpa reported that 14 people on vacation, some of them from Guetersloh, were told Monday to leave the Baltic Sea island of Usedom, a popular holiday resort.

The head of Germany's disease control center said Tuesday that the exact reasons why slaughterhouses in Germany, the United States and elsewhere have become hubs for coronavirus infection are still being investigated.

"It's certainly the case that if you live in cramped conditions and small rooms then that's a situation where the virus can spread more easily," said Lothar Wieler, who heads the government's Robert Koch Institute.

But he added that the low temperatures in parts of the plant, intended to keep the meat cool, could also play a role.

"Another factor, which we don't think is small, is the development of aerosols," said Wieler, referring to tiny droplets of liquid that can linger in the air and potentially contain viruses.
Wieler said the outbreak at the slaughterhouse and others linked to religious gatherings could spread to other parts of the German population.

"That's why it's so important that we remain careful," he said. "The virus is still in the country and if we give it the chance to spread, then it will take that chance."

But he expressed hope that Germany could avoid a second wave of the pandemic if people followed government advice on social distancing and hygiene.

Dr. Ute Rexroth, a senior Robert Koch Institute official involved in Germany's pandemic response, noted that poverty seems to play a significant role in who gets infected, calling it "the root of the problem."

Just for political and financial gains. In the end the truth will prevail.
Report to administrator