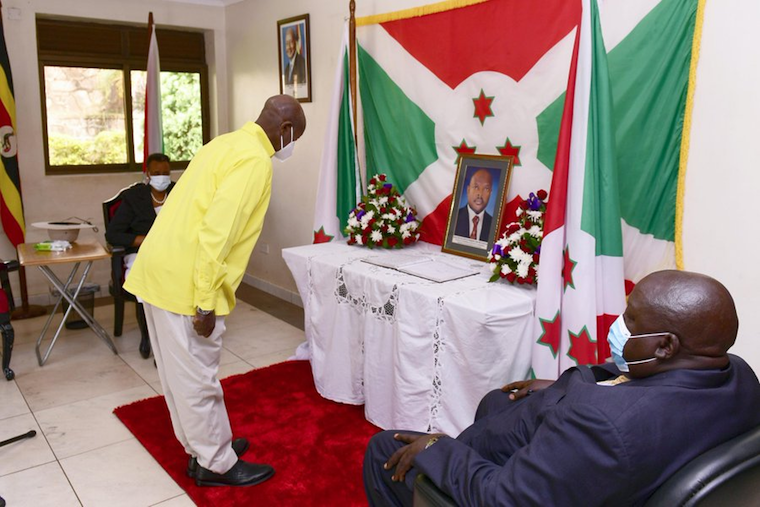 Museveni pays his respects to Nkurunziza's portrait at the embassy

President Yoweri Museveni has hailed the former President of Burundi Pierre Nkrunzizza, who died about a fortnight ago, describing him as a peace lover who listened to advice and signed a peace deal that saw his country stabilize for the last 15 years.

Speaking at the Burundian Embassy in Kampala yesterday where he had gone to express his sympathy to the country and the family of the late Nkurunziza, Museveni said Burundi has lost a great leader.

“I remember him very well when he listened to our advice to come from the bush with Rajab. We met them in Dar es Salaam. They came from the bush and negotiated with his excellency Buyoya. That’s how we got the Arusha accord that gave Burundi peace for 15 years. We salute his contribution to Burundi and East Africa. It is a sad loss because he was a young person. We just came to say pole.”

At the embassy, Museveni who was accompanied by the First Lady Janet Kataha was welcomed by the Burundian ambassador to Uganda, Epiphanie Kabushemeye-Ntamwana, Uganda’s state minister of Foreign Affairs, Okello Oryem and embassy staff.

“We have come here to express our condolences to the people of Burundi and to the family of the late President Pierre Nkurunziza,” Museveni wrote in the condolence book.

For her part, Janet thanked God for the life and service of Nkurunziza to the people of Burundi “I come to give our condolences to the former First Lady, Mrs Nkurunziza and her whole family in this very difficult time. Please know we pray for you,” she wrote.

Ambassador Kabushemeye-Ntamwana thanked the president and first lady for making time out of their busy schedules to condole with them.

The ambassador said that as a country, they learnt many important lessons from the late Nkurunziza’s reign as president, during which Burundi has achieved a lot in sectors of education, health, social-economic transformation among others.

Nkurunziza died on June 8, 2020 from a hospital in Karuzi after suffering a cardiac arrest at the age of 55. After 15 years in power, Nkurunziza was due to step down in August this year after the May general election that saw Evarisite Ndayishimiye elected president of Burundi. He is survived by a wife, Denise Bucumi Nkurunziza and five children.

-1 #1 Wainaichi 2020-06-24 12:08
RIP brave president Nkuruziza.You were Panafrican fighter and has died fighting for the freedom of his peolle.
Report to administrator
0 #2 Kalibbala 2020-06-24 21:54
Sula Kato aka Pierre Nkuruziza resident of Lower Kkonge in Kampala Trained and Groomed by his God Father the Almighty from Butare!He left 500.000 Dead Burundians..like Father like Son.!

Ugandans are Today rotting in Safe Houses simply Because His Almighty has Green Blood and is not Prepared to hand Over Power Peacefully...He Loves Violence instead!!..We are ready to see Bacweezi Green Blood Spilling to Bring sanity to Our Motherland..AMAAANDLA..
Report to administrator
0 #3 Lysol 2020-06-24 22:57
Dictators always back their own. M7 is always quick to back and support them.
Report to administrator