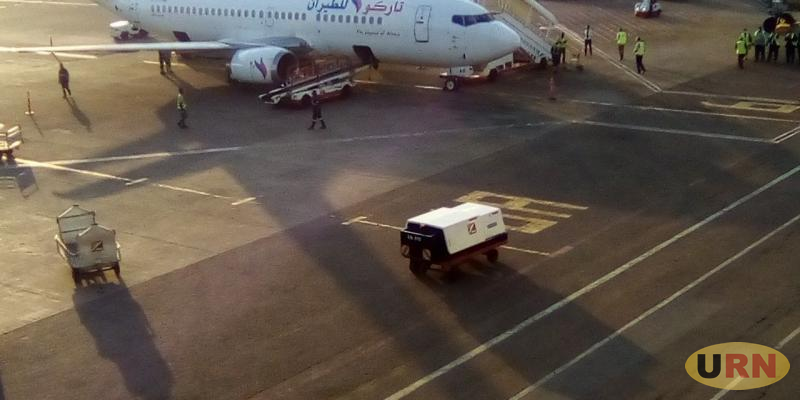 32 Ugandans, who were stranded in Khartoum, Sudan following the coronavirus (COVID-19) lockdown that affected air movement, have finally flown into the country.

The group arrived in Uganda yesterday aboard Tarco Airlines arrived at Entebbe airport at 5:52 pm and disembarked from the plane at 6:20 p.m. They were received by the minister of State for Foreign Affairs, Henry Okello Oryem, the ministry of Foreign Affairs permanent secretary ambassador Patrick Mugoya and other government officials.

In excitement, they waved to the welcoming team while others raised their hands in the sky in a sign of victory. Each of the returnees wore a face mask as they checked out of the terminal, and proceeded to the various quarantine centres.

This is the third group of returnees after seven who arrived from Turkey on Monday and the 13 who returned on May 18 on a controversial flight that had city businessman Ben Kavuya's family on board.

Another batch of 16 Ugandans was expected to arrive from Belgium and the Netherlands, while an additional 524 Ugandans will be returning by early next month. They will be coming from South Africa (70), United Arab Emirates (200), Afghanistan (108), India (120) and 134 from the United States of America.

Oryem says that in total, the country will receive the 2,300 stranded Ugandans in groups of 300 every two weeks for better management of suspects and confirmed cases. He also says those returning are paying for their air tickets and quarantine costs for those who opt for hotels.

The group from South Africa will return on July 2, and not June 25 as earlier communicated by Uganda Airlines. PS Mugoya explained that the airline announced the flight before getting clearance from the relevant authorities in Uganda and South Africa.

The returnees from South Africa are reportedly paying $931 (about Shs 2.5 million) for the repatriation flight from the usual $375 (about Shs 1 million) for a one-way ticket or $540 (Shs 1.4m) for a roundtrip. Uganda Airlines recently conducted test flights for its fleet of 4 CRJ900 aircraft that had been grounded since the airport was closed in March.

Almost certainly there will be some thief in the return process, or treatment of the returnees.
Report to administrator
-1 #2 Lysol 2020-06-24 23:02
How about the UPDF militias stranded in many African countries?

We might never know their fates. Not to mention Uganda students in China.
Report to administrator