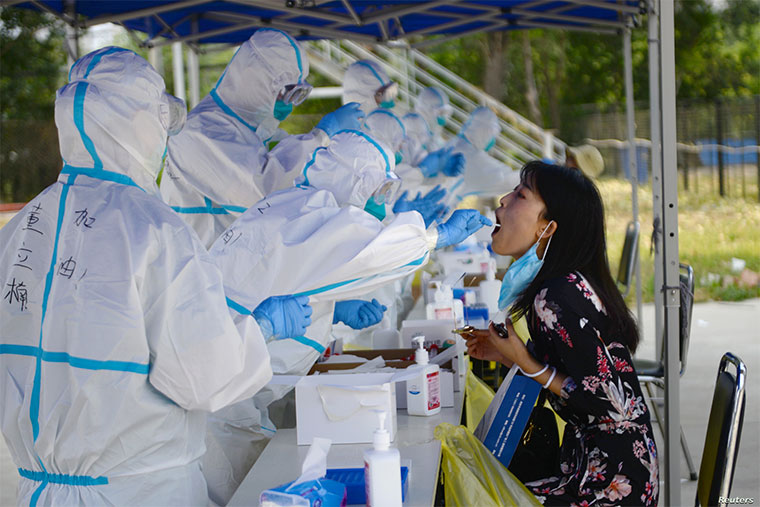 A medical worker in a protective suit conducts a nucleic acid test for a resident, following a new outbreak of the coronavirus disease (COVID-19) in Beijing, China,

The World Health Organization Sunday reported a global jump of 183,000 new confirmed COVID-19 cases, the largest single-day increase it has recorded since the pandemic began.

WHO officials have said for several weeks the focus of the outbreak is in the Americas, and Sunday’s numbers showed a one-day rise of more than 116,000 cases in that region.

Brazil led with nearly 55,000 new cases, followed by the United States with more than 36,000 and India with about 15,000 new cases. WHO director-general Tedros Adhanom Ghebreyesus said Monday the greatest threat now is not the virus itself, but rather "the lack of global solidarity and leadership."

"We cannot defeat this pandemic with a divided world," he said.

More than a dozen U.S. states are seeing rising case numbers.  Dr Tom Inglesby, director of the Center for Health Security at the Johns Hopkins Bloomberg School of Public Health, said on “Fox News Sunday” that the increase is due to a combination of more testing and a real spike in infections.

“You can distinguish what is more testing from what is more serious disease from looking at hospitalization rates, ICU rate, and the per cent positivity of the overall tests in a given state,” Inglesby said.

“And in many states, in the ones that you just showed, particularly Arizona, Texas, the Carolinas, Florida, what we are seeing is increased positivity in testing and in many cases increased hospitalization, so serious illness is happening.”

President Donald Trump has said repeatedly he believes the number of confirmed cases in the United States, which leads the world with more than 2.2 million, is a result of its testing effort.

“Our coronavirus testing is so much greater (25 million tests) and so much more advanced, that it makes us look like we have more cases, especially proportionally, than other countries,” he tweeted late Sunday.

That followed comments at a political rally Saturday in which the president said: “When you do testing to that extent, you’re going to find more cases. So, I said to my people, ‘Slow the testing down.’”

The White House later said the president was just joking. Members of the White House coronavirus task force are scheduled to testify before the House Energy and Commerce committee Tuesday, and House Speaker Nancy Pelosi said, “The American people are owed answers about why President Trump wants less testing when experts say much more is needed.”

“The president’s efforts to slow down desperately needed testing to hide the true extent of the virus mean more Americans will lose their lives,” she said in a statement Sunday.

New Zealand announced Monday it is tightening some coronavirus restrictions as it tries to stamp out an uptick in cases, all imported, after having declared it eliminated any active cases in the country.

The measures include extending a ban on cruise ships docking in New Zealand ports and stricter conditions to be met before those who arrive from overseas can leave quarantine.

New Zealand has reported nine new cases, including two more Monday, all of whom are currently in isolation facilities. South Korea, which has been dealing with its own increase, mainly in the Seoul area in recent weeks, reported 17 new cases Monday, the smallest such rise in nearly a month.

The Africa Centers for Disease Control and Prevention says that across the content the number of confirmed cases has passed the 300,000 mark.  South Africa has the most with more than 97,000.

In Pakistan, authorities are allowing some trade with neighbouring Afghanistan beginning Monday, with trucks carrying fruits, vegetables and other goods able to cross the Ghulam Khan border.

In Japan, there was good news Monday for sports fans.  The heads of the country’s professional baseball and football leagues said that beginning June 10, games can be held with up to 5,000 fans in attendance.  People will be required to wear masks and avoid shouting.