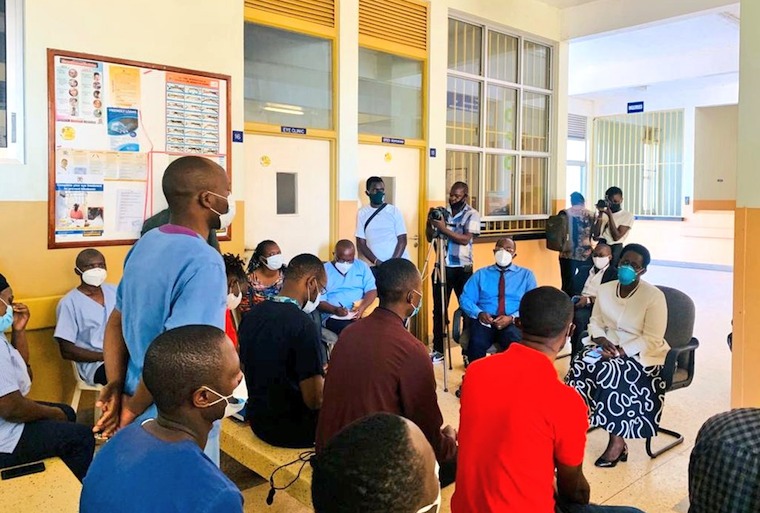 Some of the recovered patients before discharge last week

A further 53 patients have recovered from the coronavirus disease (COVID-19), increasing the total number of recoveries to 631. Active cases stand at 256 (143 Ugandans and 113 foreign nationals).

Meanwhile, four more Ugandans have been confirmed as COVID-19 positive, increasing the country's caseload to 774. The new cases were confirmed from the 2,224 samples tested on Sunday.

Two of the confirmed cases cross border truck drivers who entered the country from South Sudan via Elegu and Kenya via Malaba points of entry, while the other two cases were picked from community alerts in Kyotera and Amuru.

So far, Uganda has carried out 172,073 tests since the country reported its first case in March this year. While the tested samples figures are higher than some other countries on the African bloc, public health experts say that the level of testing that has been carried out so far in the country does not give a clear picture of where the disease is currently concentrated.

Uganda, together with Eritrea with 142 cases, Lesotho with 4 cases, Namibia with 46, Seychelles with 11 cases; are the only countries in Africa yet to register a coronavirus death according to the World Health Organisation dashboard dated June 21, 2020.

Prof Freddie Ssengooba, a public health policy specialist and also a member of the COVID-19 Scientific Committee says that the country needs to refocus its testing plan. He says that this is too much testing for a group of people that does not come into contact with many Ugandans.

The Health ministry yesterday announced that it is planning on carrying out another community survey in the country to determine where pockets of infection of the disease are cases being reported in different parts of the country.

A previous survey that was carried out in April 2020 targeting 50 border districts revealed that there were no cases of community transmissions in the country.

This time around, Prof Ssengooba advises that health officials should extend testing of the disease to private health facilities so as to get a better picture of how widespread the disease is in communities. He says, the government has concentrated its testing to the public sector.

0 #1 WADADA rogers 2020-06-22 15:48
comedy, many of these guys were never sick, they had been kidnapped and held as hostages
Report to administrator