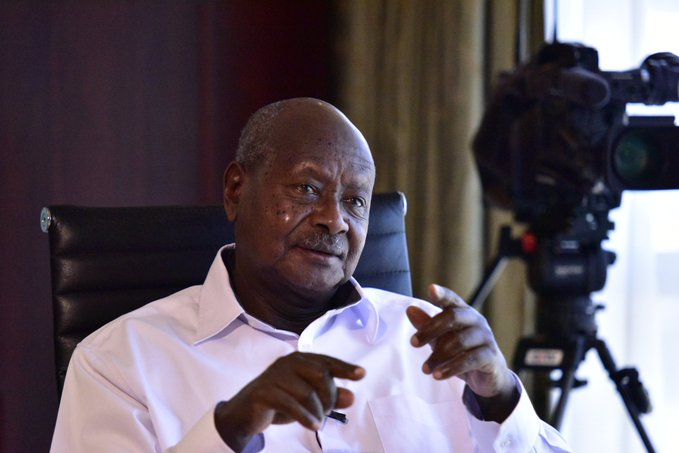 President Museveni is set to contest for another term

Uganda's electoral body, the Electoral Commission (EC) has announced a ban on mass campaign rallies for next year's general elections. The EC says, instead, campaigns will be conducted digitally on radios and television stations.

EC chairman justice Simon Byabakama announced that the polling period for the local government, parliamentary and presidential elections will be conducted next year between January 10 and February 8. But unlike previous elections, Byabakama said, this time around due to the coronavirus pandemic, there will be no mass campaign rallies.

He said this is not going to be a conventional election like we have always known it where candidates traverse the country campaigning by holding mass rallies to explain their manifestos.

Instead of rallies and other person-to-person campaigns, Byabakama said candidates will have to make use electronic and digital media to reach their voters. Speaking at a press conference held at the EC headquarters in Kampala today, Byabakama said the EC had looked at all provisions of the Constitution, and they all allow them to undertake these unprecedented measures. He urged the aspiring candidates to make use of the state-owned media, which he said all must have equal access to.

"For presidential candidates, Section 24 is their safeguard, they must have equal access to state-owned media. We’re also going to be in touch with the state-owned media in order to ensure that this provision is complied with. They are going to give us UBC and so on and so forth. We’re going to make sure that this is applied. For private media houses or owners, we’re also going to seek the services of the Media Council and UCC [Uganda Communications Commission]." said Byabakama.

Asked whether the EC shouldn't have postponed the election to such a time when COVID-19 is no-longer a threat and compensate for the time lost, Byabakama said they have to operate within the remaining time-frame to comply with the dictates of the Constitution that make it mandatory to organize an election within 120 days to the end of the term of a sitting president, parliament or local council.

“We have had to deal with the challenges so as not to be in breach of the Constitution. Political parties have to take cognizant of that fact. The primary concern for all of us is to preserve the lives of the people,” Byabakama said.

According to the revised roadmap, political parties are supposed to hold party primaries between June 22 and July 21. There will be nominations for candidates for local government elections including the special interest groups between September 7-17 this year.

For places which can’t pick radio signals such as those near the border like in the Sebei sub-region, Byabakama said he’s going to talk to UCC and the ministry of ICT & National Guidance to allow the return of community radios, ebizindaalo to enable such areas to also be part of the national exercise.

He called on political parties to ensure that in all they do, the people’s lives take centre stage. He said that they are going to ensure that these measures are complied with.

"Candidates who will be holding public rallies, in brief, in order for us to ensure that these measures are realised or followed, I think we’ll have to work with security agents particularly the police because some of our political actors have a tendency of being indiscipline…And we want to appeal to the aspiring candidates or those who will become candidates or even those who want to consult, please be mindful of the lives of the people of Uganda. Why do you want to gather people in large numbers when you know the likely outcome?" Byabakama added.

Another 5 years guaranteed. The trick to winning is to always change goal posts.
Report to administrator
0 #2 WADADA rogers 2020-06-16 19:22
This is a hard joke and i hope the EC has carried out enough consultations before taking this decision. about 75% of the local Fm stations are owned by politicians or are associated with a politician.

Somebody should tell me how an owner of a radio station will allow an opponent to de-campaign his on his own radio or television station.
Report to administrator
0 #3 Miki 2020-06-16 19:26
Why not amend the constitution to include a one year sunset provision postponing the election until when it is possible to hold meaningful elections?

Mr. Museveni should set up a government of national unity immediately to guide the country through the covid 19 crisis that is certain to get worse.

All indications are that Uganda, like much of Africa, is yet to experience even the first wave of covid 19 community infections. The state of affairs is such that the economy is in shambles and the looming health crisis means that things are going to get worse before they improve.
Report to administrator
0 #4 WADADA rogers 2020-06-16 19:27
We are also betrayed by our own history where opposition politicians were denied air time on radio or tv by state agents, security, rdc or orders of the guy at state house.

What is special about this time round. Besides, it is too late for opposition politicians to open up their own tv and radios.

Am sure even opposition politicians with radios or tvs will have them switched off by UCC for very stupid reasons provided they attack M7 while campaigning
Report to administrator
0 #5 WADADA rogers 2020-06-16 19:30
So this time round NRM will not have a delegates conference to decide on the usual sole candidate
Report to administrator
+1 #6 Lysol 2020-06-16 19:37
It is a complete waste of time and resources to hold sham elections.

The opposition will never be allowed equal amounts of time or even barred from some media networks. It has happened before. Ask Besigye and others.

Let Nature take it's own course to bring the change we need in this country. Who would have predicted COVID-19 and what we see in America? Not even the so-called many fake prophets of today.
Change will come when we least expect it. Never lose hope!
Report to administrator
0 #7 WADADA rogers 2020-06-16 20:54
Somebody tell me, what is M7's picture doing in this article, is it M7 who declared that elections will be scientific
Report to administrator
0 #8 WADADA rogers 2020-06-16 20:56
If this system is adopted, there is a high likely hood that M7 will still move around under the pretext of promoting Government programmes or opening buildings, attending burials while the opposition will be clipped, not allowed to go anywhere near trading centres etc
Report to administrator