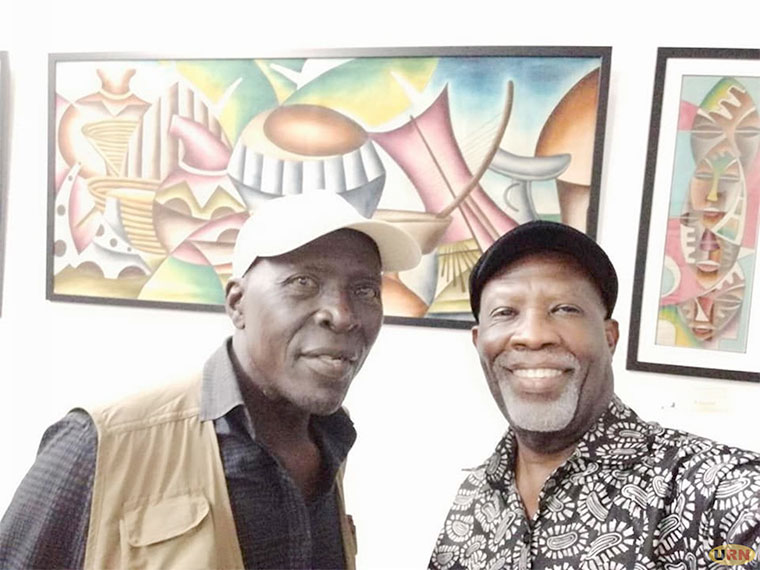 He wrote his script, acted and directed the movie, that premiered on Hero's Day. Finally, the General had gone. Finally, because for a number of times he had been announced dead by the reckless social media, declaring death without caring about family and friend’s feelings.

Growing up, Maj Gen Kasirye Ggwanga was extremely stubborn, it is surprising he didn't end up in Kampiringisa, where many stubborn kids were taken for straightening, so we were told. A dreaded place, whose mere mention would send chills down children's spines.

Wasswa as most of us grew up calling him was a handful to teachers. Our high school days were full of action. Attending teenagers' dances almost every Saturday and Sunday at New Life, Mengo later renamed Economic Night Club after the exodus of Indians and Pakistanis in 1972.

Wasswa loved dancing and was a regular at Afrigo band's performances. Ggwanga to many who knew him was an enigma. But he was shy, yes very shy for those who knew him. The shades he donned masked his shyness. Without shades, he would feel naked and disarmed. He was a human magnet, wherever he was, crowds would gather to hear what he had to say, and he never disappointed.

He loved people and would do anything to help where and whenever he could. He loved children, all children biological or non.

Did I mention that he also loved and collected my art? Well, he did, and would occasionally drop in at my studio/gallery for a visual feast and chat. He was always in search of knowledge through reading and watching TV. He would go on and try to implement what he would have read and seen! Sometimes to disastrous results.

As a teenager, he would stir up things and when the fight broke out he would disappear in thin air. However, that changed drastically after the basic military training in 1972 in Bombo Military wing. He became extremely fearless and daring.

The 1979 war, followed by two years of detention in Tanzania and the years he spent in the bush fighting the murderous Obote regime shaped his view of life in terms of what was, is and should be. And when the opportunity to try his luck on the ballot box came, he jumped on it. Kasirye was unanimously elected political head of Mubende District but preferred to be referred to as governor as opposed to chairman according to the Ugandan constitution.

Why the governor title? Of course, the American influence, where he had spent a whole year attending a course at Fort Leavenworth Staff and Command College, and too, growing up we had watched a lot of American movies especially Cowboy ones aka Western movies. He also believed in the federal system of government. To many, especially those with roots in Mubende, he remained the Governor until his death.

He loathed hypocrites, despised the corrupt, abhorred bullies and avoided idleness. He had an enormous heart with several compartments, in which anyone would fit. He was also extremely impatient with non-performers, but generous with whoever presented a need to him.

Although he was tough looking as he appeared, Kasirye Ggwanga was an extremely emotional man and would breakdown at the news of the passing on of a beloved one! And such occasions were many!  Man Nowa (Nuwa) tuggwaawo! He would say.

The most amazing thing is that he was loved by many from near and far including those who had never met him and only knew him through his pronouncements in the media. Then there were those who resented him because of his lack of sugar-coated utterances. He said what he meant and meant what he said. That was Kasirye Ggwanga!

The President and Commander in Chief, while delivering a Hero's national address interrupted his speech to announce the passing on of a hero, in real-time! He ordered the entire nation to observe a moment of silence in the General's honour! The nation obliged and soon there was an outpouring of grief at the confirmation of Ggwanga's death.

If indeed people love him, going by the number of outpouring emotions following his passing, then let every mourner plant a tree in his honour and memory. And may the powers that be declare total war on all those engaged in environmental degradation, land grabbing and corruption in any form. Here I must aver, Corruption is getting what you don't deserve whichever way. Oh, how I wish a forest would be planted in his honour and a compilation of his sayings be published into a book.

I thank the Almighty God for according me the privilege and the honour of meeting, getting to know and sharing a lot with Maj Gen Wasswa Kasirye Ggwanga. The General lived up to the Namukozi motto: Okutya nsonyi; Obuzira kitiibwa. Loosely translated:  cowardice is shameful; Bravery is honourable.

Major General, Brigadier, Colonel Kasirye Ggwanga as many civilians would fondly call you, believing Colonel was your first name and Brigadier a nickname; you didn't live in vain.

Rest in peace my friend, My Brother.

Now that Maj.Gen Wasswa Gitta Kasirye is resting in his grave , its time to carry out a postmortem.

Sure , there is enough circumtantial evidence to justify an interrogation.

a ) why did the army suddently deploy the military police to " guard " Kasirye Gwanga ?

b) Why did he reject to be placed under "guard" ; and for what reason did he accuse someone of sending him spies?

c) why was he arrested ; and why did the army deny that he had been arrested though many army Senoir Officers got to know of his arrest and demanded his release ?
Report to administrator
0 #12 Wooden K. 2020-06-13 16:25
d) who made that fake "will" in which Kasirye said ( on his death bed ) that he was leaving Camp David to the Army , his guns and uniform to Muhoozi Kainerugaba ?

e) why did the army not allow and private doctor to examine his body after he was dead ?

f) did he really die in "heros day" or was this arranged to create a sensetional story with the aim of covering up something ?

g) why did Museveni suddenly decide to hold a cabinet meeting the exact time when Kasirye was being buried ?

i) why didn`t Salim Saleh , Muhoozi or any member of the SC 1st family attend the funeral ?

There are many questions that need to be asked
Report to administrator
0 #13 Wooden K. 2020-06-13 16:44
Kasirye had a Close friend : Lt. Col. Bbosa. Bossa was one of the most hardworking NRA fighters. Kasirye and Bbosa worked in Republic House. Kasirye was in Housing , Bbosa was in Logostics

in 1987 , Bbosa returned home to his Kololo Residence with his fiance , only to find that there were new "guards " at his gate . He asked who they were and who had deployed them.

The answer was several shots in Bbosa`s head and chest. Bbosa was assassinated infront of his fiance weeks Before their wedding.

Had Kasirye forgotten this ; is this why he was suspicious when "guards " were sent to him without his knowledge ?

Something else I have mentioned Before : Kasirye was used to smear and destroy some of his former combat comrades

Had he started "talking " ?

Was he silenced because he had started to sectretly mend his conscience ?
Report to administrator
0 #14 Wooden K. 2020-06-13 16:50
Isn`t it comprehensible that the Pimps Squad headed by Balamu , Full Figure , Kusasira , Mama Finam Kulannama etc manufactured wicked "inteligence" that Kasirye has been and is sectretly working with some elements in People Power to sobatage the 50 year Master Plan ?
There is a lot to chew .
Report to administrator
-1 #15 Juwait kali 2020-06-13 23:49
One by one they die like broiler chickens. They all speak in tongues, never defend one position and at least get to be appreciated by that side they have chosen.

We have to put an end to this now waiting is not going to change the terrain.
Report to administrator
0 #16 Juwait kali 2020-06-14 07:47
Wooden K knows he will never get the answers he is looking for as long as the Mafias Tamale murundi always talks about and then roams the streets free wearing the same yellow clothes as them.

What does that tell you.
Report to administrator
0 #17 Nalongo Mutiima 2020-06-14 08:42
In his will handed over to the daughter, Kasirye had wished his body to be cremated and the ash taken to a museum.

I saw his coffin lowered into the grave. Was the will honoured or there was no will?
Report to administrator
0 #18 Wooden K. 2020-06-14 13:21
Juwait Kali Ssebo , Wooden is a thinker.
He knows that sometimes you get no answer if you don`t ask a question.

Wooden knows that today`s questions will definately be answered tomorrow.
Report to administrator
0 #19 Kadogo Wine 2020-06-14 15:35
Kasirye Gwanga, Katumba Wamala, Moses Ali are not insider generals like those you know.

Kasirye remained an ignored barking dog on the sideline, consoled with a general's pip to lull him to sleep. Remember Moses Ali used to complain that his promotion was long overdue before he was made a general. incidentally the three generals were Amin's soldiers. Rest in Peace, Kasirye Gwanga..
Report to administrator
12