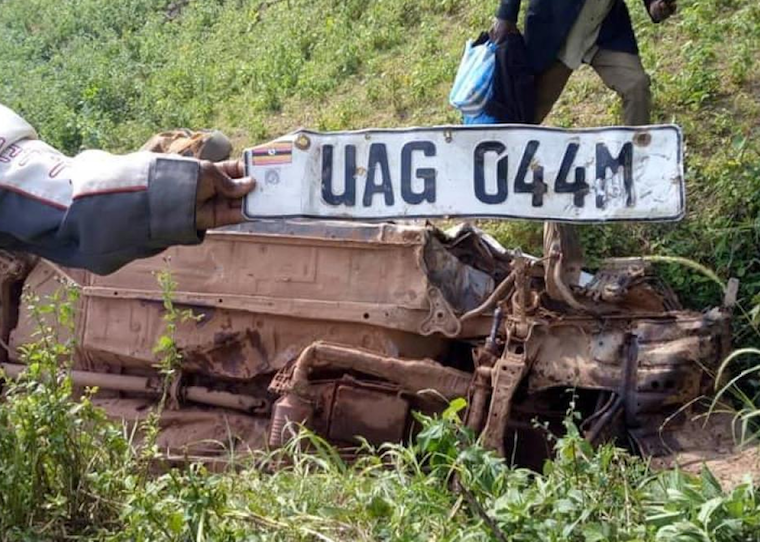 The wreckage after the accident

A couple has perished in a motor accident on their way to attend a scientific wedding in Kisoro district.

Hillary Namanya, the programs manager of Rukundo International, a local NGO in Kabale and his wife, Barbra Natukunda passed away at around 5:30 pm on Friday at Kagano along Kabale-Kisoro road in Kanaba sub-county, Kisoro district.

William Tumuhairwe, the officer in charge of traffic at Kisoro police station, says their Toyota mark II vehicle, registration number UAG 044 M that was being driven by Natukunda failed to negotiate a corner at Kagano trading centre and swerved off the road before rolling several times.
Elly Maate, the Kigezi Region Police spokesperson, says the couple died on the spot, while Rachael Guhirwa who was also in the same vehicle was rushed to Kisoro hospital in critical condition where she was referred to Mbarara regional referral hospital for further treatment.

According to Maate, the couple was on its way to attend a 'scientific' wedding of their friend Nelson Yumvirusaba and his wife, Rachael Guhirwa in Gisha village in Murora sub county scheduled for Saturday.

The couple had secured permission from Kabale resident district commissioner, Darius Nandinda to travel to Kisoro for the wedding. The deceased’s bodies are lying at Kisoro hospital mortuary pending postmortem.

Sorry but if i may ask, is this news, to me it would have been news if the couple that was supposed to be wedded is the one that perished

Any death is news.
Report to administrator
0 #4 Bangumya Burnett 2020-06-08 12:00
Rachel was going to get wedded and Babrah was going to be her Metron so Bababrah Travelled with her husband and Rachel.

Babrah was my OG from S2 to University but it was unfortunate incident. RIP
Report to administrator